Heating efficiency experts will tell you the best bucks you can spend on your home are those that keep the heat you’ve already paid for inside a little longer.

Air sealing in the basement and around the chimney and installing plastic window inserts and caulking around the outside frames are inexpensive improvements that yield savings, winter day after winter day.

Too many homeowners mistakenly look for the silver bullet—the latest, greatest heating plant—as the solution to their high heating bills. Outside-the-house wood furnaces, highly efficient gas boilers and pellet stoves have all had their day in the spotlight.

Heat pumps are now being embraced in the same way. And while they are not the right choice for everyone, the technology—especially as it has evolved in recent years—is worth a closer look.

In simple terms, heat pumps harvest heat from the outside environment and dump it inside. They are much like refrigerators, which use compressed refrigerant to remove heat from inside the appliance and transfer it into the room. Their sole source of power is electricity, and so may not make sense where electric rates are high, such as some Maine islands (though they can be practical on islands where heating fuel costs are high).

Air-source heat pumps made a significant leap toward practicality when engineers at companies like Fujitsu and Mitsubishi developed variable speed motors. This has meant the units are not running at maximum speed when heat is called for, thereby drawing a lot of electricity.

“They’ve come a long way in the last few years,” said Harry Podolsky, community energy associate at the Island Institute (publisher of The Working Waterfront). “They’re efficient down to minus 15 degrees.”

He explained the units draw electricity to:

“You’re not heating with electricity,” Podolsky said. “You’re harvesting ambient heat in the atmosphere.” On average, for every unit of electricity used, three units of heat are produced. Heat pumps produce at a rate equivalent to oil heat if the fuel were selling at $1.50 per gallon.

The new generation heat pumps are ductless, he explained, which saves on installation and heat loss. Insulated hoses move the warm refrigerant into the house to wall-mounted units, where a fan blows the heat into the room.

Back to their “no silver bullet” reality—if the temperature falls below zero for a few days, it would be prudent for the homeowner to turn on the oil furnace, Podolsky said. Still, that homeowner’s heating bill might be $700 for electricity and $300 for oil for the season, he said, rather than $1,800 for oil.

Another advantage of using electricity for heat, said Podolsky, is that consumers are somewhat protected from the steep spikes in price that come with oil.

A typical heat pump would provide 9,000 BTUs of heat, Podolsky said. “Mini-split” units include one box-like fixture outside the house, which holds the compressor, and one or two blower units mounted on interior walls. Again, the hoses can be run through walls or a basement more easily than ducts.

Scott Libby had been a heating and air conditioning technician for 30 years, but two years ago, he launched a new business, Royal River Heat Pumps in Freeport.

“The technological advances,” he said, “they’ve grown leaps and bounds in the last three to five years.”

Royal River installed 160 heat pumps in 2014 and by late August of this year, had matched that number. About 90 percent are residential installations.

The payback time ranges from a single season on a one-zone unit to three or four years on a multi-zone system, Libby said.

When giving estimates on installations, Royal River aims on the high side.

Maintenance includes washing the filters in the inside unit a few times a year, and having technicians from the installer returning every two years to clean other parts, Libby said. Mitsubishi provides a 12-year warranty on parts. And Efficiency Maine offers rebates of $500 for residential installations. 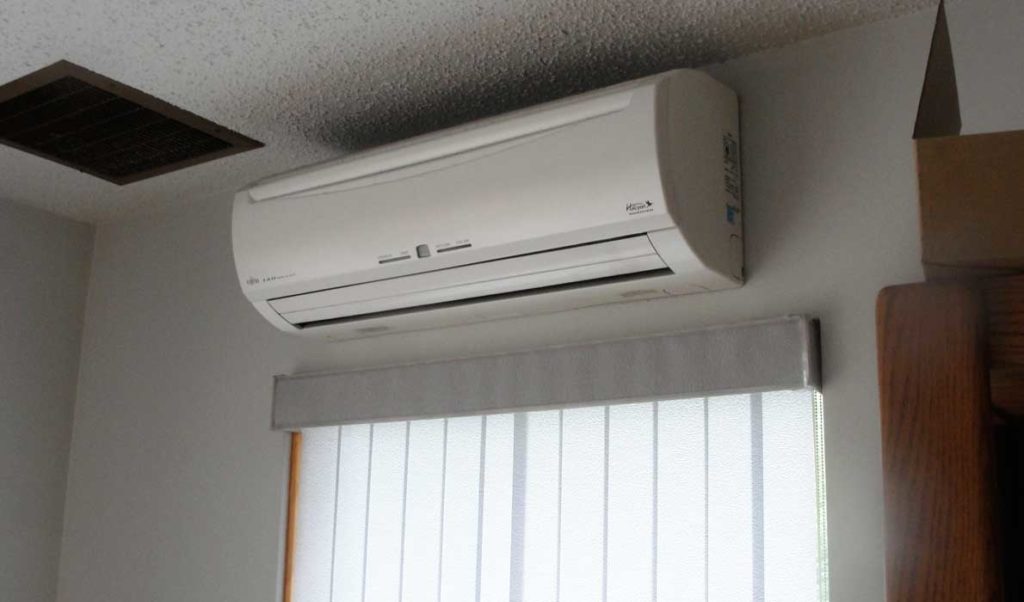 The interior part of an air-source heat pump includes a fan that blows across the heated coils.