Photographer Richard Howard has travelled all over the U.S. and the world photographing people and places for publications such as Smithsonian and National Geographic. Now the long-time Vinalhaven summer visitor wants to use his 45 years of experience to document the island community.

Howard plans to spend two years making periodic trips to the island to photograph as many of the year-round population as possible. The finished product will be a collection of portraits that will be housed at the Vinalhaven Historical Society. Howard also hopes to produce a book that would benefit the society as well.

So far Howard has made five trips to the island, beginning last October. He has set up in a variety of outdoor locations, as well as the Vinalhaven School and the Ivan Calderwood Homestead. With the help of high school art student Emma Van Dyne, Howard asks passersby to sit for a portrait. 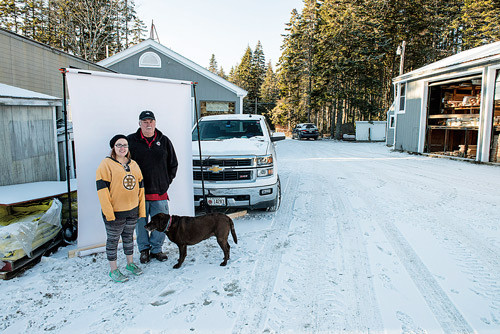 Employees at the island’s Viking Lumber store pose for Howard.

Van Dyne is a senior at Vinalhaven High School who is studying photography.

“I’m there to help when (Howard) needs it,” said Van Dyne. “I help set up and take down, hold doors and reflective sheets, and snag people from the road, help get people out of their shells. I think it’s really fun and definitely a good experience working for a real photographer, especially one who works for himself,” she said. “It’s a very interesting project, and challenging because people don’t necessarily like to have their picture taken.”

One such person is Kevin Hopkins, co-owner of Hopkins Boatyard on Vinalhaven. Hopkins doesn’t enjoy having his picture taken, but when Howard stopped by the boatyard one cold winter day, Hopkins and his co-workers agreed to let Howard do his thing.

“It was a good time of year, it was a slow morning,” said Hopkins. “He seemed like a nice guy, he was polite,” so Hopkins let Howard set up his white backdrop and give him directions on how to stand, how to tilt his head, how to hold his arms. “I think it’s quite an undertaking for him to do this just out of the kindness of his heart,” said Hopkins. In the end, Hopkins was pleased with his finished portrait.

“I chose color because we live in a world of color,” Howard explained. “It’s more important to represent the world in color for historical purposes,” he said. “The interesting thing about a white background is how clean it is, you can really see the person. The limited thing is you can’t see the context. It’s compelling, in a way, to see the person with less elements.”

While Howard has been photographing around 35 people per visit, he takes home around 1,500 images each time, having photographed each person in a variety of poses and lighting situations. This makes for a time-consuming job looking at each image to decide which will be used in the final project.

“Usually one or two are better,” he said, “when a person’s eyes are engaged or they’re moving their head around the white space. I’m the kind of photographer who doesn’t have a preconceived notion of how (subjects) should look.”

Throughout his career, Howard has most enjoyed projects that had personal ties.

“Looking back, I like the projects that I was able to initiate,” he said. “I had an interest in Vinalhaven, on multiple levels, that evolved over 20 years. That’s where I got the idea for this project. On a personal level, from visiting with my kids, my affection for the island itself and the year-round community grew,” he explained.

“Vinalhaven has a large year-round population for an island, and industry independent of summer visitors. And I have a deep respect for the people, in this case the lobstering community, who do the physical work who provide the food the rest of us consume. I wanted to put together all the skills I’ve learned on assignment, my skills as a portrait photographer, to do a profile of the year-round community.”

When the time comes, Howard hopes to end his project with an exhibit of his photographs in a community space. With over 100 islanders photographed so far—about 10 percent—he will have to find a large venue. 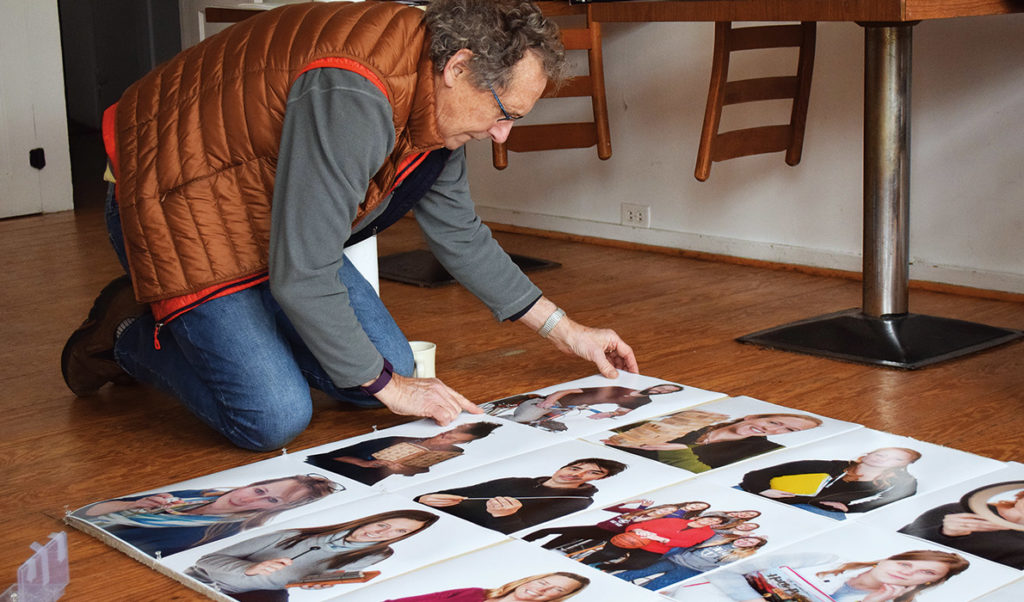