When Ryan Woolsey and Kealii Mano moved from the year-round tropical warmth of Hawaii to Stonington, where they’d experience their first cold winter and snow, they had no regrets.

They did have to shop for heavier clothes.

“I had to figure out what this thing called ‘long johns’ was,” Woolsey laughed. “I’m not going to be shot on the boat. What do I need ‘Under Armour’ for?”

When the first snowstorm hit, Mano had only his flip-flops.

“Never heard of that, ‘double socks,’” said Woolsey. “We were so used to Hawaii still.  We had our fishing boots and whatnot. But we just weren’t used to putting stuff on. We come from a place where you put your shorts on and a T-shirt—and bam, out the door. Now it’s the long johns, and the pants, and the socks, then pull the boots on and you’re halfway there, then the shirt, put my hat on, then grab my jacket!”

Woolsey and Mano are engaging and warm young men who smile easily and love to tell stories. Woolsey arrived in Stonington from Lana’i in September 2009, and Mano in the summer of 2010.

Both were in construction. Woolsey was working on a job site with over 700 employees, building a condominium complex and high-rise hotel. Mano was doing carpentry, building homes. The trades are a big part of the economy, said Woolsey, due to tourism.

“You’re either building hotels or working in the hotels,” he said.

But the recession brought all that to a grinding halt. The first day, his boss laid off 300 people. The next day, everyone was gone. He was 19 and had to move back in with his parents. Mano was several years older and also jobless.

But Woolsey had a friend, Jared Buxton. Buxton hailed from Deer Isle, and had been on Lana’i for a woodworking job. Buxton came from a fishing family, so when work fell flat in Hawaii, he suggested Woolsey come to Maine to fish.

Woolsey started as third man on John Williams’ fishing vessel Khristy Michelle. He had no experience with commercial fishing.

“It was hard,” he said. “The first day, we had a thousand pounds of lobster, and the lobsters got claws, so it was like, ‘Whoa!’ So I grab the bands and put them on the bander, then grab the lobster and try to get a band on there without getting bit.”

Did he settle in quickly?

“I really had no choice,” he said. “I had no money to go back, so I was here whether I liked it or not. So that was my mindset—I’m going to have to learn this.”

Woolsey went on to work for several other lobstermen. In the meantime, he encountered a beautiful local resident, Anna Boyce, at a party.

“I said, ‘I’m going to say something to her,’” he said. “Then she disappeared for a year. She went back to Portland. She was in college at the time. Finally she came back here.”

The two married and now have a 4-year-old daughter, Brielle, and another child on the way. During her first pregnancy, in 2012, the couple moved back to Hawaii, thinking construction would be best for a stable income. But after eight months, they returned to Stonington, where he got a job as sternman for Aaron Larrabee. He’s been with Larrabee ever since. He’s also been stop-seining for herring and fishing for halibut.

Mano arrived in Stonington with a group of friends, all aiming to fish. They landed jobs within the first week. The others eventually left, but Mano settled in and now works as sternman for Ryan Larrabee, Aaron’s cousin. When the shrimp fishery was open, he also worked the back of a shrimp boat.

Both learned from their captains and other local men. And they work hard.

“We really made a reputation for ourselves,” said Woolsey. “And we never get seasick. You put us right to the roughest weather, it doesn’t matter.”

That’s because they grew up on the water—swimming, surfing, fishing, spear diving.

Deer Isle and Lana’i both are small islands with small populations, and there’s a certain “island mentality” in each, Woolsey said, where people help each other out. But in the early days, they had to figure out how to communicate.

“Us communicating to them was hard,” recalled Mano.

“When we  first moved up here, we still had our Hawaii accent,” said Woolsey. “In Hawaii, we’ve got this slang we call pidgin. It’s a mix of a bunch of different languages—basically English cut down as short as possible, and throw in a bunch of Filipino words and Hawaiian words, some Portuguese words. When we came up here, everybody was like, ‘Whoa, what are you saying?’”

Now they’ve settled in with steady work and a pipeline of Hawaiian visitors. Last summer, Woolsey’s mother brought with her a hula dancing troupe that did shows in Stonington and had a float in the Fourth of July parade. At 27, Woolsey is enrolled in the state’s apprentice program, hoping to get his own lobster license at some point. Mano, 29, eventually wants to get a captain’s license.

“I think getting through the winter really tells if you’re going to stay here or not,” said Woolsey. “Because after January, damn, it’s freezing!” 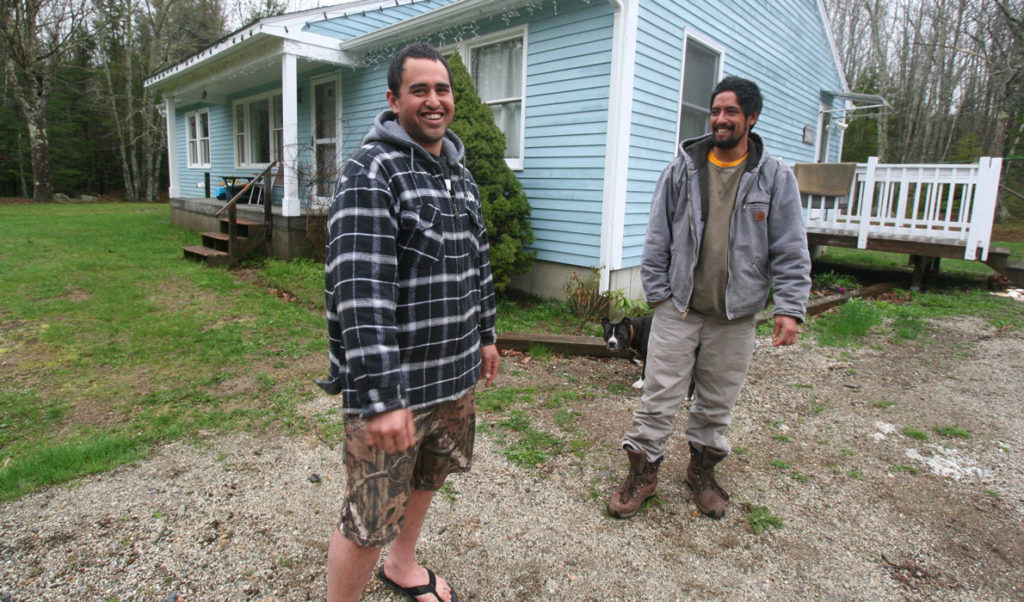