Ever since she was a young girl, Lynda Doughty has wanted to work with stranded marine mammals. Today, Doughty is executive director of Marine Mammals of Maine, a federally authorized marine mammal response organization that responds when seals, dolphins, porpoises, and whales are stranded or injured on the coast from Rockland south to the New Hampshire border.

Last year, Doughty, who lives in Phippsburg, opened a triage facility for seals in Harpswell. The facility is the only one of its kind on the East Coast. Marine Mammals of Maine was authorized by NOAA to triage, or stabalize sick or injured seals for up to 96 hours before transferring them toout-of-state long term rehabilitation facilities in Massachusetts and Connecticut.

“We got grant funds so we can do a full diagnostic workup,” said Doughty. “We take blood samples, give IVs, and offer tube feedings. I’ve been working with a vet for about 18 years.”

The first 24-48 hours is often the most critical time for injured marine mammals, she explained, so it’s important to diagnosed and stabilize the animals quickly. Many are dehydrated when they arrive and some seal pups require five feedings per day.

Marine Mammals of Maine responds to about 50 stranded seal pups each year. Doughty believes the facility could help another 10 stranded seal pups, each year, if there were more rehabilitation centers in New England to which the pups could be transported for long-term care. They do a lot of monitoring to make sure that there’s been a permanent separation between the mother seal and the pup before any intervention takes place, because the mother often seeks food for herself and the pup for up to 12 hours.

“Mom won’t come back if she sees a lot of people around,” said Doughty. “There are a lot of well-meaning people who want to help, but Mom and pup together is always best because the antibodies in Mom’s milk are best for supporting the pups’ immune system in the future. If the pups are really emaciated, then we know that they’re not doing feedings with Mom.”

“This increased capacity is making a huge difference in the lives of abandoned seal pups, and is ensuring the pups receive much-needed medical treatment,” siad Garron. “All of this is a result of Lynda’s vision, dedication, and hard work.”

Doughty said most of the seal pups they treat are harbor seals born during the spring months, but they’ve seen an increasing number of arctic seal pups in the winter.

Marine Mammals of Maine also responds to whales, dolphins, and porpoises in distress. Doughty recently assisted with the necropsy on a 50-ton right whale floating near Harpswell which died as the result of chronic fishing entanglement. Reports of stranded and/or injured right whales command a different level of response because of their endangered status.

It’s important to investigate the cause when deaths occurs, Doughty said, because marine mammals are understood as sentinels for monitoring ocean health.

She expects to remain busy with her work. Each year, some 3,500 calls are received on the 24-hour hotline (800) 532-9551 expressing concern for stranded or injured marine mammals.

“The public wants to see that something’s done,” said Doughty.

Marine Mammals of Maine welcomes donated funds and supplies to assist in its work. For more information, see: mmome.org/. 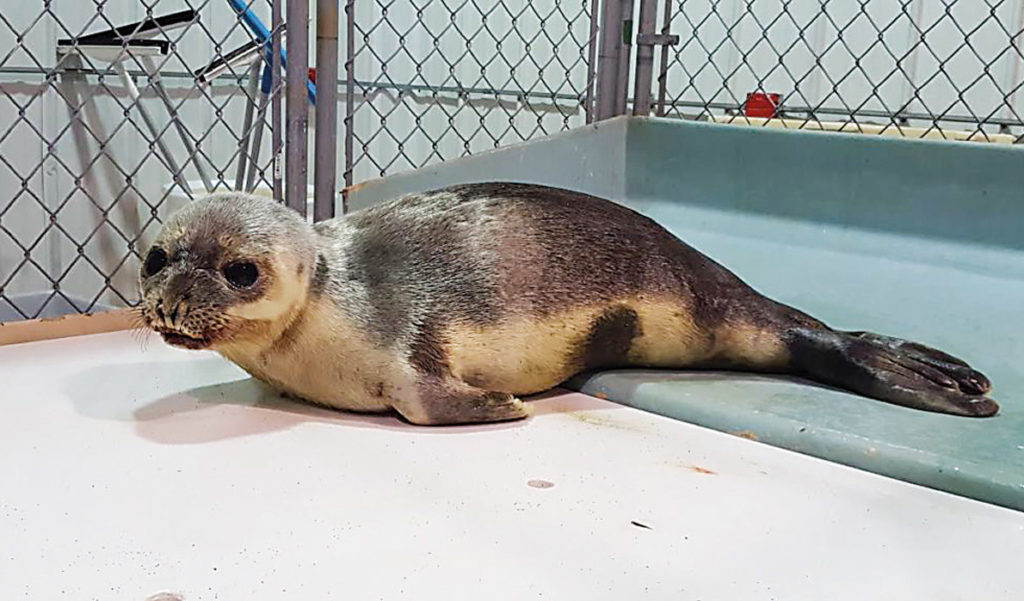