For students at Harpswell Coastal Academy, it’s all digital, all the time.

From filming interviews with fishermen and their families, to editing and recording soundtracks, students at this public charter school use digital media technology to meet educational standards and capture stories in their community.

The program was launched in the 2014-2015 school year, the second year the school was operating, said Phelan Gallagher, its instructional technology coordinator and music teacher.

“Myself and another teacher, Kelly Orr, partnered on an oral history project with a group of division two [high school] students,” he explained. “We also partnered with the Harpswell Heritage Land Trust, and they provided funding for us so we got some audio recording equipment.”

The project, Voices of the Sea, gave students opportunities to practice interviewing skills and etiquette. The documentation and editing of the filmed interviews was carried out by media professionals who partnered with the school.

Gallagher and his colleagues upped the ante for students in the 2015-2016 school year.

“We kind of sought to be a little more ambitious this year and we got a grant from the Holbrook Community Foundation,” he said. The Cundy’s Harbor-based organization was founded in 2005 to purchase and preserve Holbrook Wharf, and has since expanded to provide funding for educational projects which preserve the area’s history.

“The purpose of this grant was to tell the story and explore the challenges faced by commercial fishing families in Cundy’s Harbor,” said Deirdre Strachan, the foundation’s vice-president.

“We were able to acquire cameras and build out this media studio with [the grant], and ultimately what we laid out with them last summer was a year-long project,” said Gallagher.  Students built upon their previous interviewing experience to research, interview, film, edit and score the school’s second digital ethnography project, Voices of the Working Waterfront: Cundy’s Harbor.

Gallagher said students spent the first trimester of the school year exploring artifacts from Cundy’s Harbor’s working waterfront and writing research papers based on the exploration. The second trimester was spent preparing for, conducting and documenting interviews with Cundy’s Harbor fishing families.

“In the third trimester, we had a documentary media class that was charged with taking the hours of interview footage, hours of B-roll and gathered specific shots they knew they needed,” Gallagher said. “We split the group into three teams and they each pretty much independently produced a third of the film.”

Students were able to differentiate within those teams based on their skills and interests. Harpswell Coastal Academy student Cheyanna Johnson found her place behind the camera.

“I especially loved filming because I knew the area so well, because I grew up there and it’s where everything started for me and my family,” she said. “I already knew what shots I wanted us to get and where we were going.”

Karli Jo Clark, another student involved with Voices of the Working Waterfront, used the project as an outlet for her musical talent.

“I found out how incredibly hard it is to sing and be recorded for a serious film,” she said. “There’s a ton of editing and a lot of people hearing the same clip of you singing over and over again. It’s absolutely nerve-racking.”

Clark also had a tip for aspiring filmmakers: “I’ve learned that using a tripod on a boat is a very stupid idea and you won’t be able to use any of the footage,” she said.

Voices of the Working Waterfront was completed in June and premiered at Bowdoin College, which also partnered with the academy to provide equipment and some of its own students to assist with the project.

“It was packed, standing room only, a really mixed crowd,” said Gallagher. “It was affirmation of the work we were doing.”

For Clark and Johnson, the digital media project strengthened their connection to their community and its working waterfront.

“I think it’s incredibly important to highlight issues in your local community and capturing the stories of local natives is an accurate and resourceful way to do so,” Clark said. “Now, when I walk through Harpswell I see homes, stories, and boats that remind me of people who I’ve encountered and really listened to.”

Johnson already had a connection to the community.

“Personally, I felt so grateful to be a part of this project because Cundy’s is near and dear to my heart. It’s where my grandfather started his business, Ken’s Lobster,” she said.

Future Harpswell Coastal Academy students will also have opportunities to explore their community through digital media.

“We’ve identified this oral history project as being an ‘all students in HCA will have completed before they graduate’ type of class,” Gallagher said. “It was a very authentic learning experience for everyone.” 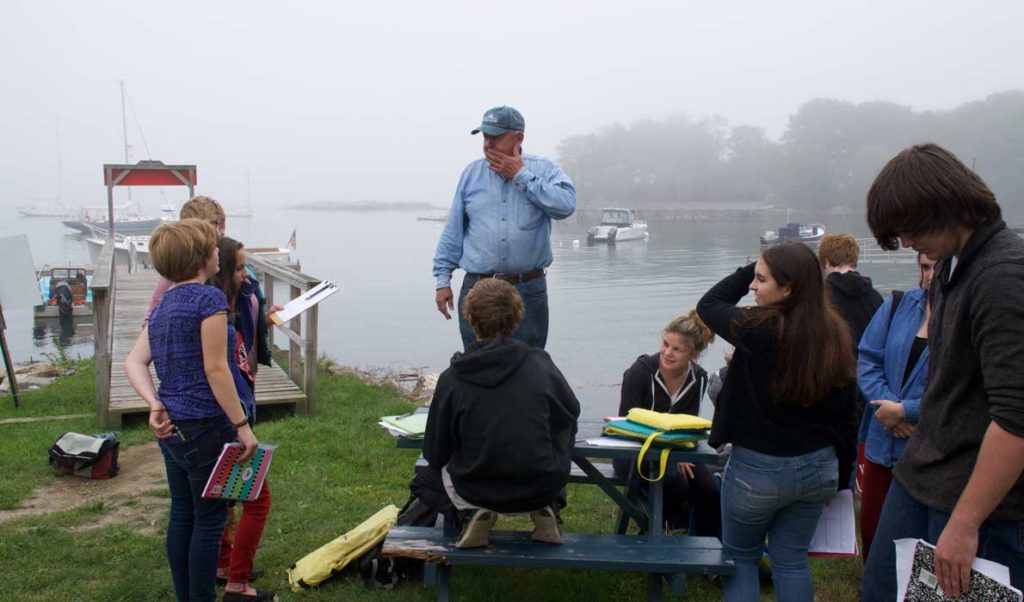