The story of Atlantic halibut, the giant among New England groundfish, is similar to the story of cod: it once lived in vast numbers off our shores and after centuries of fishing its population is now a tiny fraction of what it once was. But unlike cod, the halibut’s story has started toward a happy ending.

The Atlantic halibut is an impressive animal; the record-largest was 600 pounds. Most full-grown female halibut are 100–150 pounds, with males slightly smaller. They are a slow-growing, cold-water animal, found from southern New England to Labrador and in depths of 200-300 m and 37-48 degree water, living up to 50 years. The waters off Midcoast and Downeast Maine are prime habitat for halibut.

Halibut were caught along with other groundfish from the 1500s through the 1800s. While halibut is considered a delicacy today and sells for more than three times as much per pound as cod, it was not considered a desirable fish in centuries past. Records show fishermen in the 1800s killing and discarding halibut that came up in their nets because they knew that halibut ate cod.

Nonetheless, fishermen caught up to 12 million pounds per year of halibut in the Gulf of Maine and on Georges Bank in the 1890s. Catches decreased over the 20th century, and by the 1990s the population of these giants of the deep was on life support.

In 2004, federal and state fisheries agencies finally implemented a series of rules aimed at rebuilding the population. Groundfish fishermen using dragger nets and gillnets were no longer allowed to target halibut directly, and were required to discard overboard any caught by accident. The one exception: they could keep and sell one halibut per trip, as long as it was at least 36-inches long—pipsqueaks compared with the seven-foot-long fish caught decades earlier.

Fishermen in Maine waters were allowed to continue a small directed fishery, using baited hooks set on lines along the bottom. They were not subject to the one fish possession limit, but could only land 50 fish each year. They also underwent a special training, and used approved gear that made survival of fish below the 38-inch size limit more likely.

Between 2000 and 2008, Maine researchers partnered with fishermen on a suite of studies to learn more about the biology and life history of halibut. They found that female halibut did not start reproducing until they were surprisingly large, an average of 40.5-inches long and 6-8 years old. As a result, in 2009 the minimum length for a “keeper” was increased to 41 inches in state and federal waters. The annual catch limit was also decreased to 25-inches to help the population rebuild.

As part of the research, hundreds of halibut were tagged and released in eastern Maine. The majority were re-caught in the same region, but almost a third were caught in Canadian waters around Nova Scotia, Newfoundland and the Gulf of St. Lawrence. One champion traveler clocked in on the Grand Banks, at 1,750 km away from its tag location.

The new rules appear to be slowly working. Since the late 1990s, when the population bottomed out, the total U.S. and Canadian catch has increased by a factor of three. By 2009, total landings were 132,000 pounds—80,000 pounds of which was landed in Maine. The landings decreased again in 2010, but have ticked up every year since, and last year, Maine fishermen landed more than 93,000 pounds. With a price of $6.67 per pound, this resulted in a $622,000 fishery.

About 100 Maine fishermen participate in the directed fishery every spring. They land and sell individual fish weighing between 25 and 40 pounds and selling for $150-$300 at the dock. This one-fish-at-a-time, high-value fishery is similar to the swordfish and tuna fisheries, and dramatically different from our high volume fisheries like lobster and herring.

As a $600,000-plus annual fishery, halibut was worth more to Maine fishermen last year than both haddock and cod, which were each worth just over $500,000. While we land less halibut, it sells at a much higher per pound price than other fish. The average $6,000 in revenue for each active halibut fisherman is an important seasonal source of income.

But it is the future that looks truly promising for this fish and fishery. Scientists estimate that over the next 40 years the wild population could rebuild to more than 110 million pounds, which is their target for supporting the “maximum sustainable yield.” If the population does reach this size, it would support an 8-million-pound fishery. Based on the current geography of the fishery, Mainers could land 4.5 million pounds each year, almost 50 times the 2015 catch. At today’s price, the fishery would be worth $30 million dollars.

Projected increases in our local water temperatures and competition from other groundfish whose populations are also re-building may decrease these numbers, but the future still looks brighter and brighter for the mighty halibut. 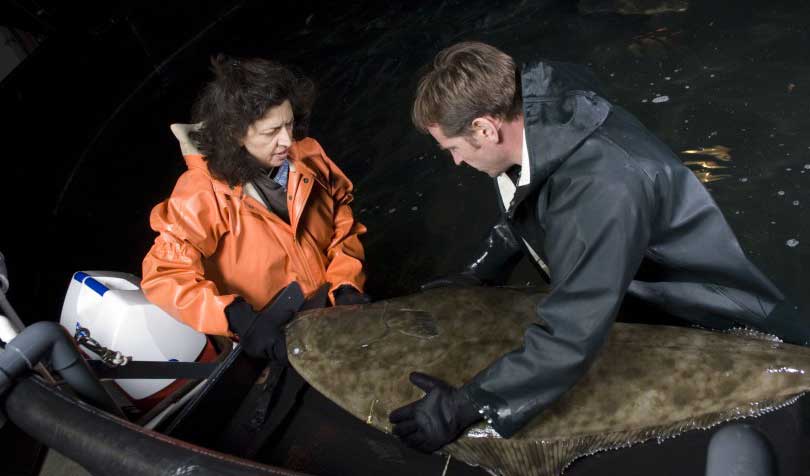