Lobstermen call it “ghost gear”—the remnants of lost, costly lobster traps to snags, storms, trap wars, and damage by both sailboats and power boats, all hazards inherent in fishing the Gulf of Maine.

It comes with the territory, and the out-of-pocket costs are significant for those who now fish an estimated 2.2 million traps a year. Then there’s the impact on the seafloor environment.

“One of the issues with ghost gear are traps that wind up on the bottom, but continue to fish,” says Buzz Scott, the visionary behind the ongoing Traps 2 Treasure phenomenon this is taking root in fishing communities along Maine’s extensive working waterfront.

“Any animal that enters one of those ghost traps can’t escape and has a very good chance of dying. Then there are the steel wire traps themselves, which for decades have been polluting the seafloor.”

Wire traps replaced wooden traps and have been the norm since the early 1980s. Today there are 4,400 licensed lobstermen, many fishing the Gulf of Maine with as many as 800 traps each. At whatever rate they fish, lobstermen expect to lose 10 percent of their gear, traps lost overboard or on the bottom, in addition to traps retired onshore.

“The number of traps that end up on the bottom is in the millions, just within the Gulf of Maine,” Scott said. “The official ghost gear estimate is 5 to 10 million in Maine waters. I think it’s much higher than that.”

Scott’s Traps 2 Treasure project also addresses a strategy for recycling wire mesh traps abandoned on shore without any cost to often-retired fishermen. Regional landfills charge from $1 to $2 per stripped-down trap.

For many years now, Scott has been the director of Oceans Wide, a non-profit that encourages young people ages 12 to 20-something to embrace careers in marine biology and marine technology through live-in summer camps, most recently based in Winter Harbor within the former U.S. Navy housing and classrooms at the Schoodic section of Acadia National Park.

These remote-controlled mini-submarines are used to locate sea-floor ghost gear as a first step in salvaging it for recycling. These remotely operated vehicles—called ROVs—can locate ghost gear and mark its location through GPS, and then return to attach a line used to pull the trap to the surface for recycling.

Scott and his education director Matt Louis have engineered and fabricated a pneumatic device that crushes skeleton traps for efficient recycling. Steel recyclers pay between $20 and $30 a ton for the traps, the equivalent of 100 traps. The revenue generated is used to pay high school-age workers to tear down and crush the traps, jobs that pay $11 an hour.

Students and recent alumni of Sumner High School in Sullivan, Lincoln Academy in Newcastle, and Deer Isle-Stonington High School are now involved, including many who are the sons and daughters of Maine coast lobstermen.

Scott has plans to expand his recycling in Gouldsboro, as well as in Jonesport, Stonington, and Vinalhaven. Financial supporters to date include Machias Savings Bank, the Schoodic Community Fund, the town of Gouldsboro, members of the Winter Harbor and Corea lobster co-ops, and a growing list of individual and anonymous donors, many of them lobstermen.

“Our vision is to have these trap recycling centers all along the coastline,” Scott said. “Not only do they benefit the health of seafloor ecosystems, but they provide meaningful work for the students who become involved.” 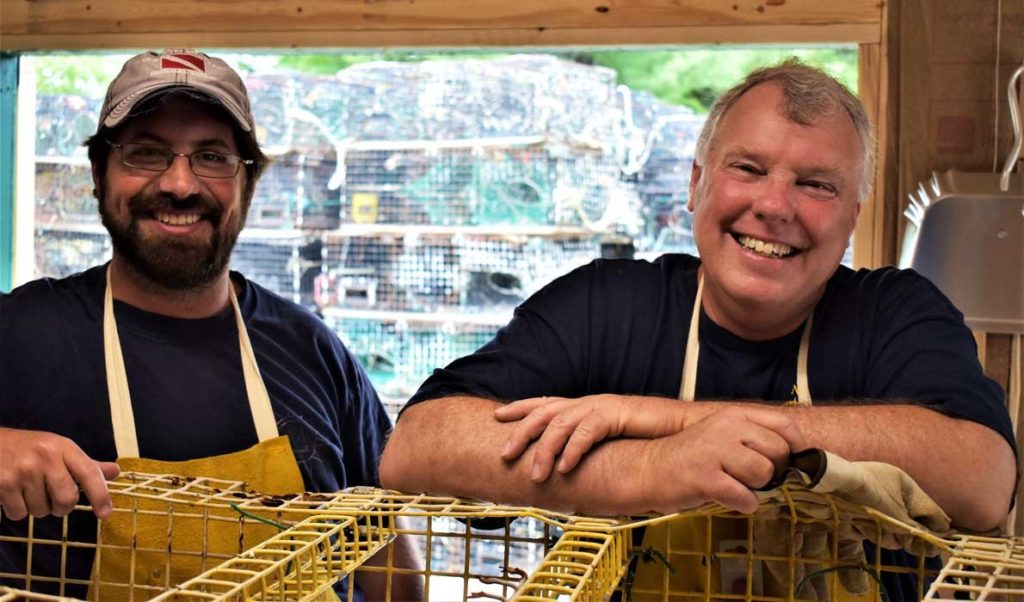