Capt. Kevin Jones has been fishing out of the Port of Galilee, in southern Rhode Island, for a long time.

As a kid growing up near one of Rhode Island’s busiest ports, Jones helped out on other fishing boats as he worked his way up the ranks. Now, he’s captain of a 70-foot trawler. His primary catch, like most captains in Galilee, is squid.

Longfin inshore squid, the species brought ashore at Galilee, is a point of pride in Rhode Island. The squid are processed and frozen at the port, and are shipped all across the country and the world for human consumption. In 2014, the Rhode Island state legislature designated calamari the official state appetizer.

“We are the squid capital of the East Coast,” said Dan Costa, the port manager at Galilee. “Squid is our mainstay fishery here. (It’s) what most of these guys call their bread and butter.”

I visited Galilee on a breezy summer day, and the port was bustling. Trawlers slipped in and out past the breakwater and deckhands darted around the docks, loading and unloading supplies, stopping occasionally to shoot the breeze or lob a good-natured insult. Captains fussed around on deck, fixing broken gear and cursing tangled nets. Workers at the bait company had fired up the forklift and were getting barrels of baitfish ready to be taken onboard.

As Costa, the port manager, took me for a walking tour, word spread quickly that an agent from the National Marine Fisheries Service was also on site. Rumors proliferated as to what he might be up to. Though the port is run by the state of Rhode Island—Costa himself works for the Department of Environmental Management—and the fishermen I spoke with generally had a favorable view of state government, the NMFS is viewed with skepticism, if not outright hatred.

Turns out the agent was just doing routine catch inspections, warranting grumbles but no outright rebellion from the fishermen.

Tension between fishermen and the federal government notwithstanding, the squid fishery, by all accounts, is booming. The port saw a particularly impressive harvest in 2016, according to Costa.

“Landings were epic, astronomical, never to be seen like that again,” he said. The squid harvest is usually greatest during the summer months, and in June of 2016 the Galilee fleet landed close to seven million pounds, according to NOAA figures (2017’s June harvest was down to just over one million pounds, bringing it more in line with other months’ catches).

For the region, 160 commercial fishers landed 10 million pounds of longfin squid in Rhode Islabnd valued at $14,790,686, according to the state Department of Environmental Management.

Even with the big harvests, the squid population seems to be doing just fine. In 2018, the Marine Stewardship Council certified the Northeastern Longfin Inshore Squid fishery—which extends from the Gulf of Maine to North Carolina and includes Galilee—as a “sustainable and well-managed fishery.” It was the first squid fishery in the world to receive this level of certification, according to the MSC.

The sustainability of the fishery is in part thanks to the prolific reproduction capacity of the longfin squid. Females can produce up to 15,000 eggs at a time, and the species spawns year-round.

In its certification announcement, the MSC noted that longfin squid might actually benefit from warming ocean waters brought by climate change. They are already extending their range further north.

As Costa and I continued our tour of the port, I finally got to see the squid themselves, as they were being offloaded from one of the trawlers. When a boat comes ashore, the crew dumps the squid into a pipe and conveyor belt system that whisks the catch straight into the processing plants onshore. The squid themselves are small, only about a foot long, with big black eyes and translucent, gelatinous bodies. Their prized tentacles—most of which are destined for the deep fryer—are silvery white.

As the oceans warm and sea levels rise, the fishing industry is going to change, whether it wants to or not. As the lobster industry here in Maine prepares for major disruptions related to climate change, new approaches are going to be needed to sustain fishing-based economies. If the Port of Galilee is any example, it might be worth taking a closer look at longfin squid. 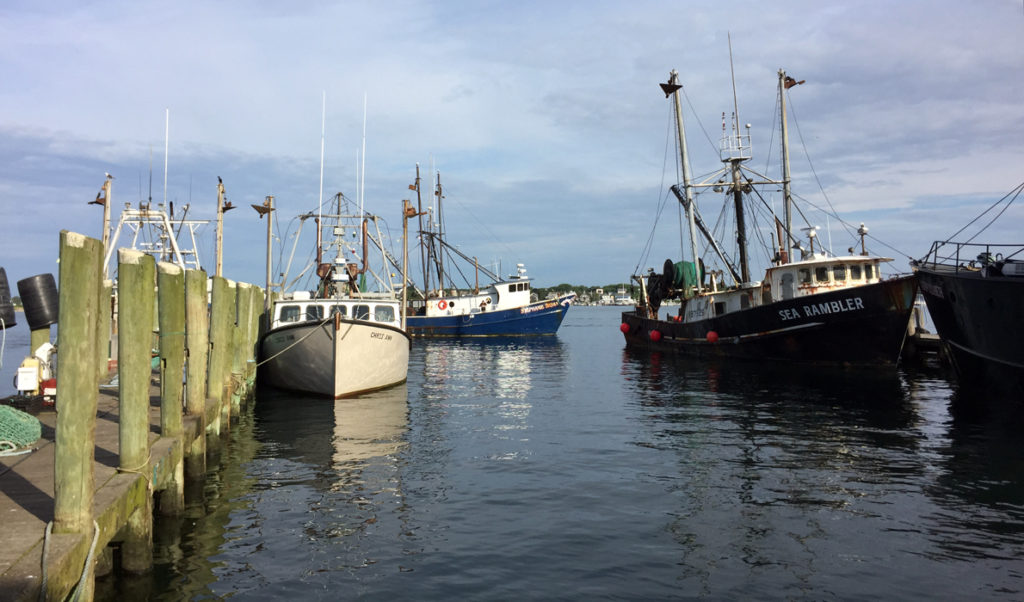