This past summer at a luncheon for the recipients of a scholarship program administered by the Island Institute, Melissa Amuso, one of the mothers from Islesford, spoke of the lack of recreational activities for the children in their small school system.

It was suggested that “golf croquet” might be appropriate for her school, a sport that can be enjoyed and played by students of all ages and athletic abilities. Within ten days she had discussed the potential for a program with Heather Webster, the principal of both Islesford and Swan’s Island, and they were ready to get the croquet balls rolling.

Inspired by their enthusiasm, Tina Hinckley of Southwest Harbor and Perry Mattson, director of croquet at Woodlawn Museum in Ellsworth, agreed to assist in establishing a program and provide coaching and tutorial lessons at the museum’s croquet lawn. With his input and that of Bob Kroeger, who is nationally recognized as the foremost croquet teaching professional, each of the nine schools of the coastal Outer Islands were contacted.

Within a few weeks, all of the schools—on Monhegan, Islesboro, Vinalhaven, North Haven, Isle Au Haut, Swan’s Island, Frenchboro and Islesford—joined what will be known as the Outer Islands Croquet League. An island summer resident offered to donate tournament quality equipment for each school.

Golf croquet is a fast-moving, simplified version of the much older, staid lawn game that is gathering devotees from many age groups. It takes about ten minutes to learn the rules. It is an alternating, single-shot version and easy to play. Players swing their mallets, hoping to send the ball through the wide wicket. While it is OK to aim one’s ball at an opponent’s to knock it off course, there is none of the stopping and “sending” of that ball that’s part of the traditional game.

The game can be played on school lawns and open fields as well as established croquet lawns. An alternative is Xtreme Croquet in which the hoops are placed in more challenging environments such as open fields and forest.

This winter, each island school will receive a special carpet and hoops for indoor games. It’s even possible to play in snow, using mallets that are modified with an angle cut into their striking surface, allowing the player to “chip” the ball over obstacles such as snow banks.

In mid-October, Mattson and Hinckley at the Woodlawn Museum hosted a clinic for representatives from Vinalhaven, Islesford, North Haven and Monhegan.

It is anticipated that golf croquet will attract the students and their parents and become an activity the entire island community can enjoy. Each school has become a member of the United States Croquet Association whose motto is Wicket Hoops—Wicked Fun! 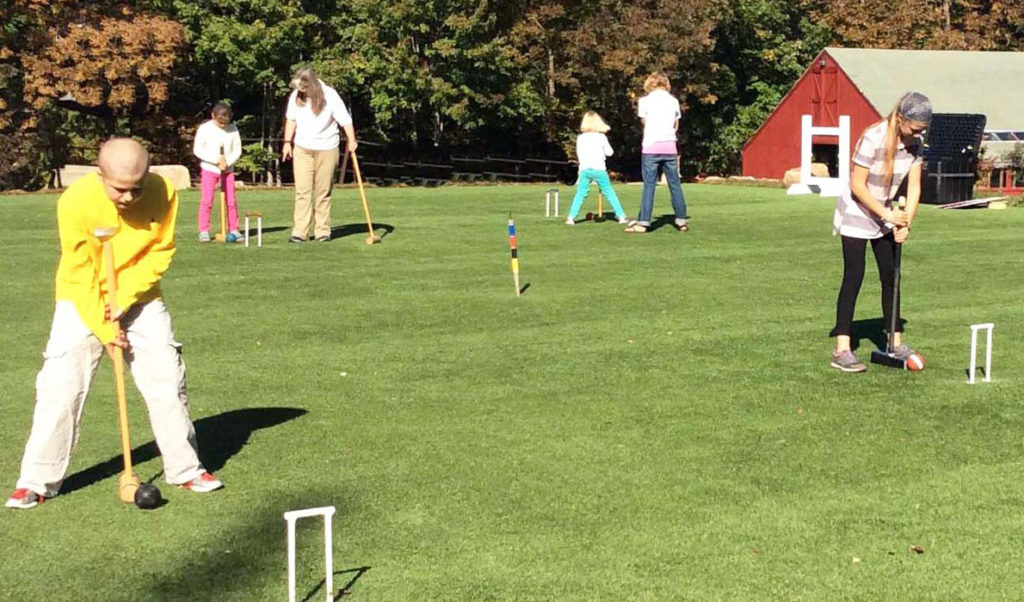