Just about every other year my husband and I travel to Southern California to visit his family for Christmas. We leave the island, which is often covered in snow, or if we’re less lucky rain, ice or slush, and take the boat to the mainland and drive to Boston and fly out. This year we did the journey with the baby in tow.

When we landed in San Diego it was brilliantly sunny and in the high 70s. A recent deluge of rain greened up the hedges and everything was in bloom. A few deciduous trees were just starting to get fall color in their leaves. I had packed a bathing suit and sincerely hoped that we would make it to a beach so the baby and I could go swimming.

“Swimming?” asked my mother-in-law. “It’s freezing!” Ah, but I am from Maine. I swim in the icy Penobscot Bay from June ’til September. The North Pacific is probably as warm in late December as the bay is in July. It makes me melancholy to think of all that swimmable water going un-swum for so many warm months.

We bought a swim diaper for the baby and headed to Tamarack, a lovely sandy stretch in Carlsbad Village.

A few surfers rode waves further out and a couple of kids hopped waves on boogie boards closer to shore, but I was the only bikini-clad adult in sight. I held the baby and dunked her feet and knees in the shore break. She smiled and wiggled. She’d already had her toes in the Atlantic Ocean and knelt in Moosehead Lake, but this was her first experience with the platonic ideal of beach.

She tried to eat sand. I handed her off to Bill and her grandmother, who bundled her up and got her back in her sun hat and T-shirt. I went back to the water, crouching as the waves broke over my back and head. It was mild and in the strong sun I never felt cold.

By New Year’s Eve day the weather was cooler and rainy. Facebook photos revealed snow in the mountains to the north, six inches in the town of Julian. Going to Julian to see the snow is a San Diegan tradition, so my in-laws, my brother-in-law’s girlfriend, my husband, baby and I packed ourselves into a giant white truck and headed north.

When we reached Santa Ysabel, one mile outside of Julian, we joined the back of a line of cars at a near standstill. As we crept towards Julian we watched as people exited their cars in traffic and ran to the shoulder to touch the rare white stuff.

In town was a mad house. There was an hour wait for lunch at the Julian Cafe. There was not an apple pie to be had in town, although the lines still wrapped around the block. Kids in new-looking winter coats and hats slid on snowy sidewalks.

I couldn’t wrap my head around it. At home, snow was something to play in but also to scrape off of cars early in the morning, shovel, plow and by March, curse. Here it was a tourist attraction par excellence. The clutch in our truck had started emitting a foul odor because of our intermittent progress through the parade of traffic. We parked out of town at the library because no other spaces were available. The Julian Cafe was out of chicken pot pie.

It wasn’t until I was back home on North Haven that I realized my enthusiasm for the warm Pacific Ocean and sandy beach were the same as the crowds thronging to touch snow, maybe for the first time.

On North Haven, our beaches are gorgeous but rocky, crustacean-scented and seaweed slick. The water is cold, except for where it warms over mudflats, in which case the seaweed factor increases exponentially. The waves are inconsequential. So when I visit San Diego I make the most of it, even in December, where I look like the nuttiest of nutty tourists in my barely-worn bathing suit.

Tourism hinges on one place having something unique. San Diego has the beach, the zoo and the safari park, which I thoroughly enjoy each time we visit. Julian has snow only an hour away from these attractions.

North Haven’s rocky beaches, sailing club, lobsters and restaurants draw our enthusiastic visitors. In the summer I catch myself looking at our tourists the same way I looked at Julian’s, and the same way I was probably eyeballed at Tamarack Beach. But then I take a step back, look at my home through tourist’s eyes, and feel its draw. 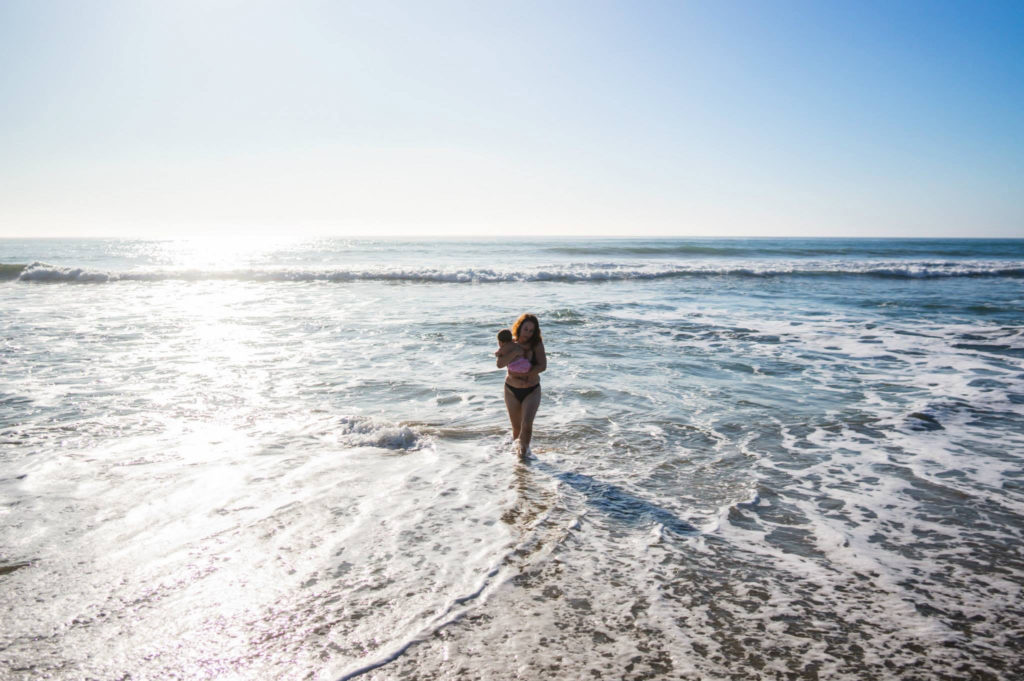 Courtney Naliboff and her daughter