In the 1970s, residents of Isle au Haut had finally had it with their World War II diesel generator and so banded together to invest in a seven-mile electric cable to Stonington. The cable, expected only to last 20 years, is now nearly 40 years old.

But Isle au Haut residents are determined not to go back to diesel generation, and so are furiously constructing solar power arrays to become completely self-sustaining, knowing they are in a race against time.

Islesford (Little Cranberry Island) is also served by an underwater cable barely 1/10th the length of the Isle au Haut cable, but it’s much older and in far worse shape. With two-thirds of the cable severed, Islesford subsists on only single-phase electricity. We are one strong storm away from its loss.

According to our sources, there is a plan to replace the cable, set in place by Bangor Hydroelectric, but implementation has been punted down the road. The unofficial plan, we hear, is that the punting will continue until catastrophe, at which point emergency generators will be brought in. Once there, it will be hard to get rid of them.

Easily, diesel fuel consumption could be over 300,000 gallons per year…

Recently, inspired by the activity of the group Climate to Thrive and the installation of a solar array on the Cranberry Isles Fisherman’s Co-op—which is supplying 100 percent of its electrical needs for freezers as well as the usual lights and computers, etc.—I joined a fledgling organization called the Cranberry Isles Community Solar Association. Considering that our island communities will be the first to bear the effects of climate change—warming seas and rising water levels—we need to do all we can to eliminate the need for fossil fuels. The time is right for turning to a solar solution.

We elected Alden Hathaway, an electrical engineer who has spent his career promoting and developing solar installations, as our president. He estimates that were our town to use generators to power the island, we would require two 500 kW generators, with one operating continuously (the other as backup). Easily, diesel fuel consumption could be over 300,000 gallons per year (35 tanker trucks per year—barged over—and/or the construction of a large diesel tank near the generators) and require the utility Versant to seek a rate increase for the island.

Besides the emissions, cost, maintenance, and eyesore of the tanks and generators, there is, of course the noise. It seems anathema to the island we know.

Hathaway estimates it will take fewer than 1,300 solar panels (450 watts each) to provide all the energy we need for Islesford. This we could accomplish in three medium-sized arrays on utility land that is, for the most part, already cleared of trees; two are owned by the town, which would not charge the community for its use.

By adding vegetation around the arrays we could actually beautify the sites.  Solar panels make no sound, take little maintenance, have been known to last more than 40 years, will not require barge deliveries (after the initial installation), or risk oil spills. On top of all that, solar has now become a good way to save money.

The Cranberry Isles Community Solar Association would seek a cost per household, assuming we engage a wealthy tax investor or two, that would be about $7,000 per family with a payback of about ten years on the energy value ($60 per month credit on average on the electric bill, increasing to $75 by the tenth year; Versant electric rates go up 2 percent per year).

But because we have formed a community solar association, we can qualify for a low interest loan to provide credit to members who would rather pay a small deposit of $400-$500 and pay back the loan over a 20-year period at $40-$50 per month.

If we succeed in this, we will confirm Thomas Edison’s words of nearly 100 years ago: “I’d put my money on the sun and solar energy. What a source of power! I hope we don’t have to wait until oil and coal run out before we tackle that.”

Jeri Spurling is an architect who lives on Islesford (Little Cranberry Island). 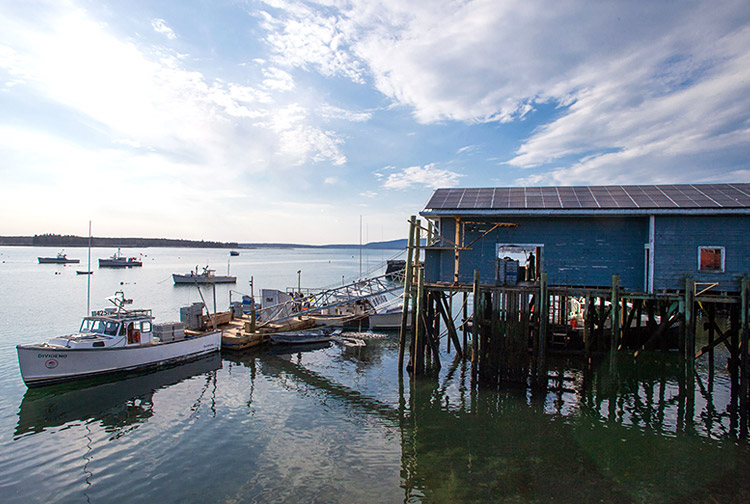