Our imaginations often are limited when we face complex problems. For example, we assume the solution to heating homes must exist within the confines of the home. We also assume that our electricity must be generated at a distance. As we head into winter, the cost of heating and electricity will be on all our minds as our bills mount.

What if we turned these assumptions around? Perhaps we would be better off if our heat were generated and delivered at a community scale. Our electricity might be best generated at the household scale, particularly in parts of the world that have yet to be electrified. This type of action and thinking dominated the First World Community Power Conference in Fukushima, Japan.

The conference was held in Fukushima on the fifth anniversary of the earthquake and tsunami that led to the failure of the nuclear reactor here. Fukushima nuclear reactors fueled the energy needs of Tokyo, some two hours south by bullet train. The city of Fukushima paid dearly for Tokyo’s energy needs.

A teenager gave a speech that brought me and the rest of the audience to tears. She dreams of being a doctor. She spoke about what it was like to be in school when the earthquake hit, the reactors exploded and it started snowing radioactive flakes because a winter storm happened to be passing through.

Now she suffers from discrimination because media outlets have suggested that men not marry women from Fukushima for fear of having children with birth defects. It is easy to think about and rationalize nuclear power until you’ve heard directly from people whose lives are being destroyed by it.

Alternatives emerged through the conference.

A key to moving communities toward a renewable energy future is trust, which we learned is a fundamental aspect of Scandinavian culture. During the Viking era it was a deep culture of trust that allowed those mariners to leave their villages for years at a time, while family members and community leaders kept the home fires burning.

Environmental concern was another theme. A South Korean island representative spoke of the importance of investing in locally owned renewables. He made the point by comparing it to the importance of caring for one’s kitchen, drawing on the Taoist belief in the kitchen god, the most powerful of all the domestic gods in Asian culture.

A woman who had moved from Tokyo to marry a farmer in southern Japan spoke about the importance of local leadership when developing renewable power companies in the country. She talked about “having her own graveyard.” This reference isn’t that different than claiming to be an authentic Mainer. Her graveyard represented the sentiment that her family comes from generations of leaders on her husband’s side of the family working the land. And these same leaders must step forward to create new energy systems, she asserted, for the future health of their families.

What can be done to generate a groundswell of support for the transition to community scale renewable energy systems? I presented on the renewable energy and energy efficiency work developed by Monhegan and the Fox Islands. After my presentation, an older gentleman from Kitkata, Japan leaned over to me and said, “The social system was built long before the pyramids were raised.”

What social system will support the changes to our energy systems that are no longer fossil-fuel dependent? How soon will we be able to think about all our electric needs coming from within our homes, or at the community scale, rather than at the regional scale? The work underway on the islands along the Maine coast captured the imagination of this international audience.

As you turn up the heat this winter, please think about the ways you can limit the impacts of your energy needs on communities far away that generate your power. And when the opportunity arises, support the move to more localized solutions. 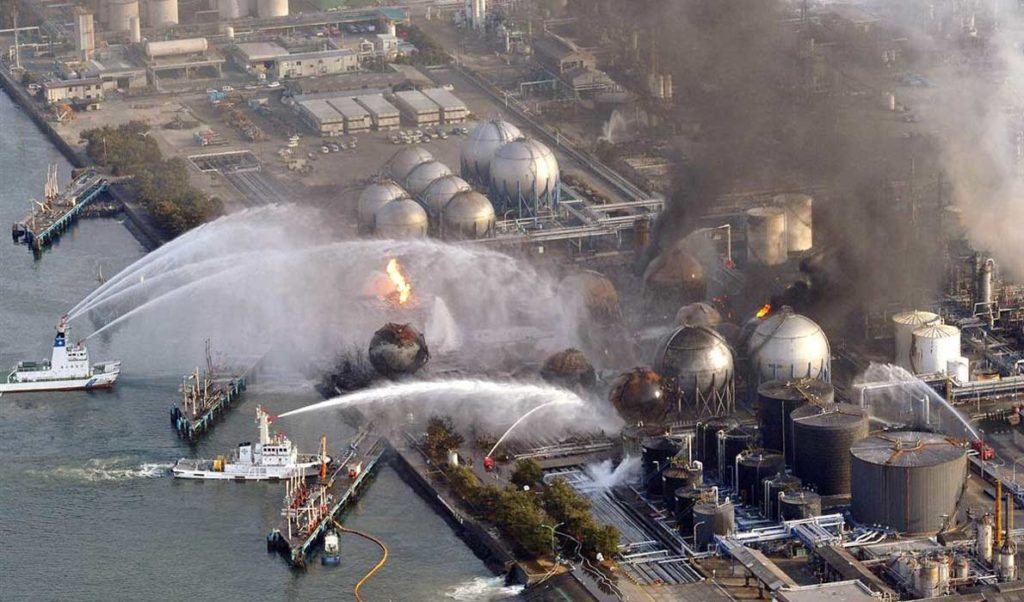 The Fukushima nuclear plant in flames.