Fall has been a season of superlatives in the Cranberry Isles. Along with a November that might turn out to be the warmest on record, in Maine, the foliage has been the brightest we’ve seen in years. A simple walk or trip to the mainland begs one to pull out the camera time and again. Best of all, this has been an amazing fall for apples. All over the islands the trees have been loaded.

On a November Saturday, I caught up with my neighbor, Kaitlyn Duggan, and her two-year-old son, Bode, as they were going down the road by our house. They were each eating an apple from the tree in Mark and Vicky Fernald’s yard.

When I said I was going to write about apples Kaitlyn’s eyes lit up. “I love picking apples on the island. It’s one of my most favorite things to do! Getting outside in the fall sun, picking with a view of the water, it’s the best. And it’s free food!”

We commented on the tree filled with yellow apples by Jack and Ellie’s house on the edge of the Sand Beach.

“I’ve probably picked six grocery bags full from that tree this year,” she said. I and many others have been to the same tree several times, picking up drops and reaching the low branches to pick, with a view of the Islesford harbor.

Kaitlyn’s husband, Cory, has been making cider, experimenting with different blends of island apples. He figures he has pressed, pasteurized and preserved at least 40 gallons this year. Kaitlyn has made several batches of applesauce, adding flavor and color with rose hips from her own garden. I asked if she knew what kind of trees were around the island. She said, “You really should give Eliza a call.” (I had actually e-mailed her that morning and was hoping for a reply.)

Eliza Greenman came to the Cranberry Isles to work as an Island Institute fellow from 2008 to 2010. In an entry on her blog, elizapples.com, “Unconventional Stories from a Young Apple Farmer,” she gives Islesford credit for the start of her career as a “crazy apple person.” She hopes to soon establish the first organic apple farm in the state of Virginia.

“I majored in forestry,” she writes, “and at the age of 25, I landed on a small island off the coast of Maine. Trees got me there and that island is where I found my life-long passion: Apples.

“On this little island in Maine, apples were everywhere and easy to see because all of the other trees were evergreens. I didn’t think much of apples at the time, but when my friend Lindsay asked me if I knew how to prune an apple tree, I decided that was something this tree nerd needed to know… so I found a wonderful man from the mainland to come and teach an apple tree-pruning workshop to the islanders. Up in an apple tree armed with a saw, loppers and basic knowledge, every cell of my body suddenly knew this is what I was meant to do. I had found my calling.”

Eliza, who has since pruned about 90 percent of the apple trees on Little Cranberry Island, responded to my e-mail with a phone call from western Massachusetts where she was attending a big apple convention.

Her first words were, “I’ve been waiting for this day!”

One of the most fascinating things I learned is that when apple trees grow from a seed, usually coming from a discarded apple core, the apples on the seedling tree might not resemble the apple from which the seed came. Whole new varieties of apples are created this way. It has something to do with how apples evolve to survive. It’s one of the reasons so many apple trees grow alongside the road and just outside of kitchen doors. It is typical throughout New England.

“Often, it’s the property owner who names their specific kind of apple,” she said. Some of the recognizable varieties on the island are Macintosh, Red Delicious, Wolf River, Empire and Yellow Transparent, but there are many more island-specific varieties, like the “Maypole apples.” I asked her, “So the tree by Jack and Ellie’s, is that a Yellow Transparent?”

“Well, it’s a Russian variety of a yellow transparent,” she said. “Someone probably ate a Yellow Transparent and tossed the core there and that is the result. It’s rare for a tree to grow in such a harsh environment.” (The tree is in such a spot as to be battered by wind for most of the winter.)

The tree by Mark and Vicky’s house is an Empire. Most everyone knows the tree by Nancy Hillenberg’s is a Wolf River. Those are the first apples I was introduced to on the island. They are my husband Bruce’s favorite apple to use for baked apples. Just core them, fill them with brown sugar and cinnamon and bake them in the oven until they are soft.

Are you wondering why it was such a banner year for apples in New England? Eliza explained that the island trees developed a biennial tendency after a year with a couple late frosts that killed off buds in March. The hard winter last year reduced the insect pressure on the apples, and because our spring was wet and cold (as opposed to wet and warm), the fungal pressure wasn’t there either. The dry late summer helped bring out the flavor in the developing apples. Apparently apples, like humans are happier with less pressure, hence a wonderful fall for apples.

I’m a little embarrassed to admit that this is the first year I’ve gone out and picked from island trees rather than buying them at the store. I’ve made apple pies, apple cake, apple crisp, a batch of apple jelly and two batches of applesauce. When the weather in the first week of November was warm, I went out and picked another bushel. More applesauce and apple jelly to come. This was one of the best years to get hooked on island apples. 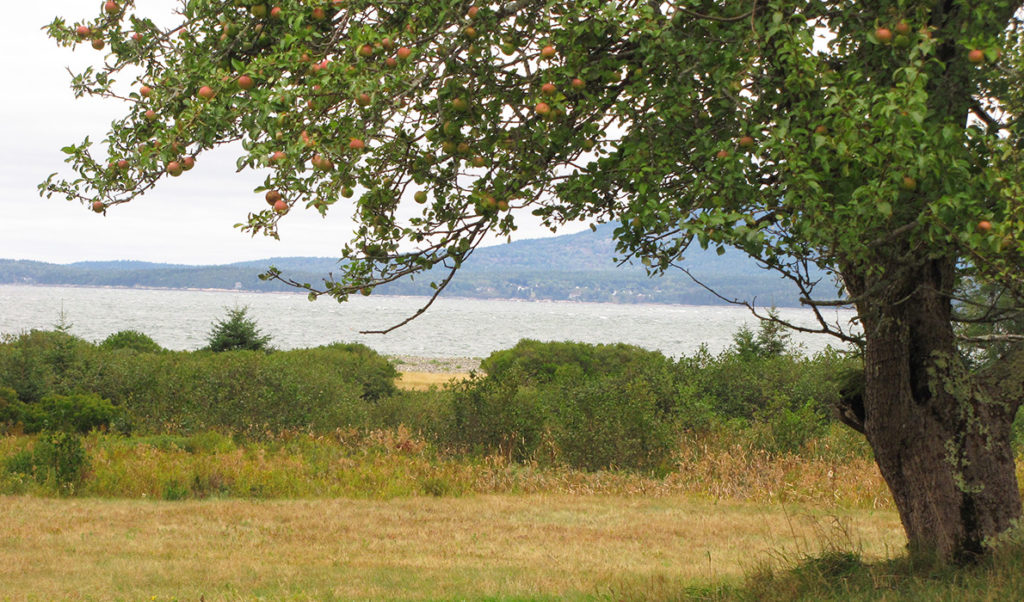 An apple tree on Swan's Island