At the food trucks, he enjoys crispy pasties, a type of empanada that goes well with hot sauce and cold beer. In New York City, he knows of a great pizzeria that uses fresh mozzarella and plenty of fresh basil—an experience he never skips.

That love of food in all its variety is what Ferreira brings to Hitty’s Café, a soup and sandwich eatery he’s been running seasonally on Great Cranberry Island for the past five years.

Now he’s sharing the love through his first collection of recipes and photographs, simply titled Cezar Ferreira’s Cook Book. The book uses his photographs and recipes to take the reader through his 30-year culinary career, working as a private chef, caterer, and magazine food stylist, primarily in Manhattan and Florida.

Hitty’s, with its flowering gardens and rustic exterior, serves as a scenic backdrop for some photographs which, of course, include a platter of iconic lobster rolls, served on buttered and toasted buns. Recipes include eggs Benedict, pastel de carne, Brazilian feijoada, and desserts such as tiramisu and crème brulee.

“It started off as a photography book to give my family for Christmas,” he said.

Then he sent the manuscript to his magazine editor.

“He said, ‘You need more recipes and you need to sell this,’” Ferreira continued. “So I went back to the drawing board and finished the book.”

Born in Rio de Janeiro, Ferreira was a young child when his family moved to New York and then Massachusetts. In his early career, he cooked at the Upper West Side location of a Manhattan restaurant called Sarabeth’s. That led to catering and to magazine photography.

During his private chef experience for high-end clients in New York and Florida, he focused on his culinary skill and artistic sense to enhance food for its visual appeal. His food photography has appeared in Vox, Newsday, and other publications. His travels throughout Europe and much of South America have been in part a culinary exploration.

Six years ago, he was operating his catering company in Vero Beach, Fla., when he got a call from his sister-in-law. She has a house on Great Cranberry, he explained, and suggested he travel up to see Hitty’s as a potential summertime gig.

“I managed to come up mid-February in a snowstorm,” he said with a laugh. “I fell in love with the island.”

He flew back to Florida the next day, but returned in the summertime to take on the lease at Hitty’s, which is named after a 1929 children’s novel called Hitty, Her First Hundred Years, by Cranberry Isles summer resident Rachel Field.

Ferreira works in a small kitchen in the rear of the café, which is part of a larger community center and museum called Cranberry House. Ferreira credited island resident Bruce Komusin, as a founding member, in 1993, of the Great Cranberry Island Historical Society, for leading the establishment of the facility, which opened in 2008 and became a visitor draw that helped reinvigorate the island community.

Visitation is central to the café’s success. Every summer was busier than the last. Last year, Ferreira calculated that he made over 7,000 sandwiches, plus soups, salads, and baked goods.

The café is open mid-May to mid-October. Ferreira said he enjoys serving tourists, local residents, and yachters. As an extensive traveler himself, he said, it’s a great chance to swap stories.

And his growing network has led to connections with new clients. For example, an L.L. Bean representative happened to visit the island one year. He showed her various spots that proved perfect for a catalogue photo shoot.

The café’s opening was delayed this year: For starters, due to the pandemic, Ferreira had trouble getting a flight back from his annual visit to Brazil. It’s unclear how the season will unfold, he said. But people are eager to swing by. During a recent Saturday lunch, he served 49. The dining area is outdoors, making it compatible with safety precautions.

In the meantime, he’s offering his book at the café and through a self-publishing website called blurb. He plans a sequel next year, to include more recipes.

What does he love about Great Cranberry?

“It’s a community,” he said. “They embraced me when I got here. It’s peaceful and the view is astonishing.” 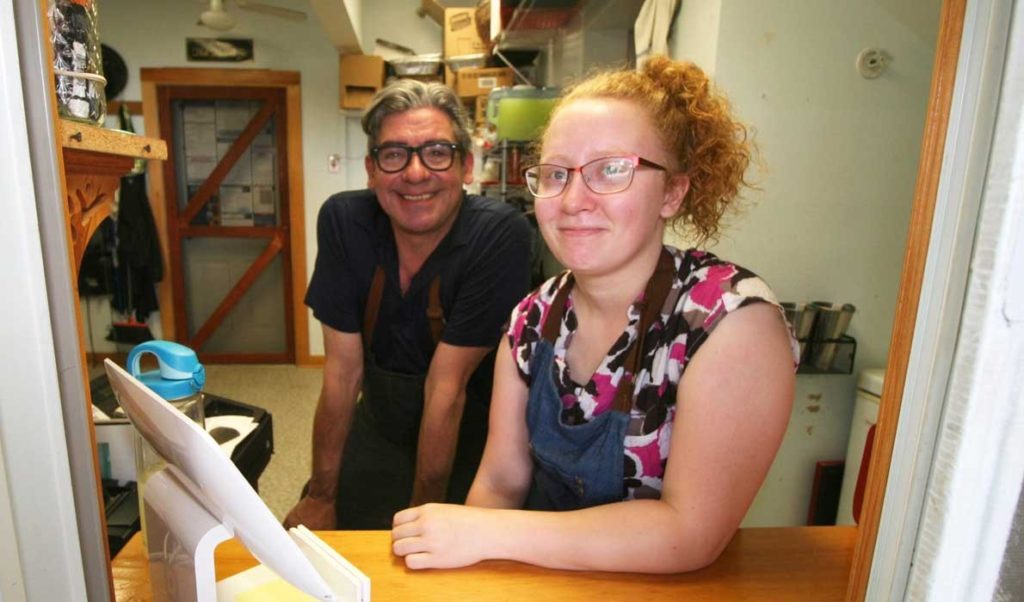 Cezar Ferreira, left, at the service window at Hitty’s Café.