The house I live in was Adrianna Bunker’s home from roughly 1869 until the mid-1920s. For about 20 years she cooked in a small kitchen in the back half of what is now my living room.

In 1889, her husband Emery modernized the house by connecting it with an ell to a barn and putting an updated kitchen in that ell. I’ll bet it was then that he installed a pump next to the present cast-iron sink, created a set of cupboards and a spacious pantry using scavenged boards from elsewhere, possibly the old kitchen.

In the counter, he made a hinged lid for a cupboard that would hold a barrel of flour. I don’t know when the zinc, still there, was laid on to make a washable and heatproof surface.

At any event, most of what he built still exists, though Annie’s old cast-iron stove has been replaced with another vintage one, an enameled beauty made in Portland about 70 years ago, which burns wood and gas. And I have a refrigerator, a food processor, a mixer, toaster and microwave, all very handy, plus an electric oven. I have running cold water without having to pump it and hot water out of a tap.

Compared to Aunt Annie, as she was known, I have it really, really easy.

Over my time here, too, this house has enjoyed a bit of insulating, hole plugging, tightening up, and miscellaneous improvements in what is generally called winterizing. Annie lived in her home year-round, and would have thought puzzling or laughable modern people not considering the house “winterized.” In Annie’s day, it was the humans who got winterized with long underwear, wool clothing, and warming viands.

Annie and her sea captain husband were intimately involved with the Free Will Baptist Church that stood about a five-minute walk from her back door. Emery’s father Silas led the church’s construction. Their pew is marked by a hymnal holder with the initial B cut into it, a matching one for Emery’s brother Edgar a few rows away.

Annie belonged to the sewing circle that materially supported the church from the later 1800s into the early 1900s. Nowadays, a spruce- and alder-filled swamp conceals the view of the church Annie had from her house, but when she lived here, she could keep a sharp eye on the comings and goings from it.

Church records show that she provided meals for visiting ministers, serving them, I bet, in the dining room I use. The church women, surely including Annie, put on suppers in the hall at the back of the church where we still have potlucks today. No running water there, then or now. No paper plates, disposable plastic forks, knives or spoons, or cups to use either.

There was a sizeable wood burning stove on which the ladies could put a camp-sized pot of hot coffee, but the food they brought was cooked in nearby kitchens, mine included, loaded into horse-drawn wagons, along with china plates, cups and flatware and delivered up. I imagine large pots of baked pork and beans swaddled in towels or old worn quilts to keep them warm; brown bread perhaps, and pies.

After the supper, the ladies loaded dirty dishes back into baskets or wooden boxes and carried them home to houses where, with luck, there might be hot water waiting in a woodstove’s water jacket or at least in a big copper pot. Dishwashing commenced at home. No paper or plastic waste went to a dump or transfer facility.

I’ll bet Annie would have loved paper plates and plastic throwaways. At least, I imagine her enjoying their convenience as much as many of us do. As recently as my childhood, though, people took their own plates and flatware, coffee cups and glasses to potluck suppers. A few years ago we here on Islesboro managed to have a grand potluck for over a hundred people, doing as Annie and her peers did, bringing all the needful from home and taking it all back again. Nine pounds of trash only resulted from that event, most of that weight consisting of shells from a delightful mussel dish.

As far as I know, no one suffered life-threatening pain or strain from bringing their own dishes from home. Compared to what Aunt Annie went through to cook and serve a church supper, we have it so easy. She’d have an excuse to glom onto throwaways while we with durable, light-weight plastic picnic ware and dishwashers at home are just plain wimping out. 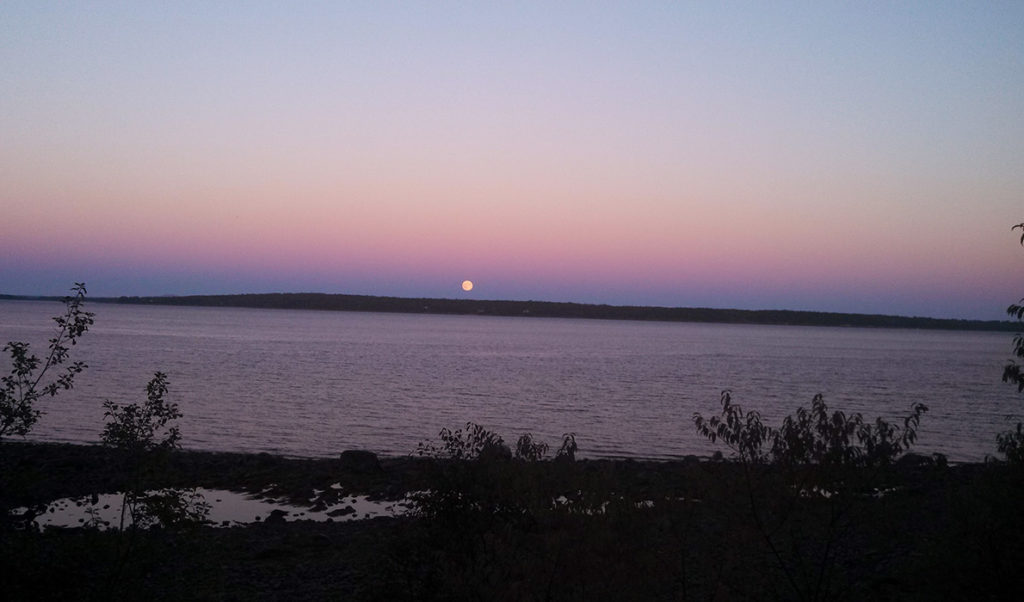 The full moon rises over Islesboro.