When Tim Flood, 60, was a kid, the sea would find its way inside one of his family’s cottages on Muscongus Bay only once in a while during the winter. But within the last five years, the ocean has been a regular visitor to the two-story building not just in the winter, but in the summer, too.

The family knew it had to do something or else the building would be lost to rising sea levels.

Sea level rise is a reality that everyone in coastal and island communities live with. Municipal governments have discussed what to do about it, and some have even put together detailed plans for coping with it and have sought out funding to implement those plans, or at least parts of them. But private property owners, like the Flood family, are largely on their own to figure out what to do to protect their properties.

The Flood family has owned its property in Friendship since the turn of the last century, when their ancestor, Dr. Everett Flood, purchased it from Capt. Ambrose Simmons. Simmons, a fisherman, operated a schooner called a pinky. He’d sail from the cove to the Grand Banks to fish, and when he returned home, he’d tie up his vessel to a wharf built in the cove.

On that wharf was a fish house where the captain would salt the fish he brought in. That fish house is the building the Flood family is now working to save from the rising seas.

“It’s really a historic building,” Flood said. “We wanted to preserve that for future generations.”

The Flood family today calls the former fish house The Defiance and rents it and six other cottages on their 65-acre property to summer visitors. It is built on the wharf, with the ocean flowing under it. It has no plumbing except for the kitchen sink. A plumbed bathroom is in a separate building on shore.

When the ocean became a more frequent winter visitor a couple of decades ago, the family was worried the sea would knock the building off its foundation so they cut panels out of the floor about five feet wide by 15 feet long and bolted them together. The panels would lift up with the incoming water and settle back down as the water flowed out. That worked for a long time, Flood said, but the water now comes in two or three times a summer, when they are likely to have tenants in the building.

How much water enters the building depends on the tides and the moon cycle, he said, but there’s sure to be some water inside if the tide is over 11-feet, 3-inches.

Given predictions that the ocean is only going to continue to rise, the Flood family decided to be proactive. They hired S&S Excavators of Cushing, which began the process of raising the building by 28 inches last January. Over the winter, the company poured the new, higher foundation—working around the tides—and lowered the building in place on the new foundation.

The cost for the project—estimated to total somewhere between $50,000 and $100,000 by the time all the ancillary work is completed—“was a major problem for us and a concern,” Flood said. The family wasn’t able to find any resources to help private property owners deal with sea level rise, he said.

That doesn’t surprise Robert Marvinney, a geologist with the state’s geological survey staff who monitors sea level rise for Maine. “Individual property owners are mostly on their own,” he said.

“They’re not ignoring the property owners in the area,” he said. “It’s just really tough to see how to spend public funds to improve private property.”

Especially when the cost estimates for public infrastructure work are already eye popping in many communities, such as Damariscotta, where, five years ago, that community’s flood resiliency plan was estimated to be $1.4 million.

Given the funding realities, the Flood family still opted to get their sea level rise project done. The family is paying for the entire project, Flood said.

“It’s not an insignificant cost. In our minds, it’s worth doing because we want to preserve the historic nature of the building and preserve it for future generations of our family.”

Resources for home owners: Go to the state’s geological survey website at https://www.maine.gov/dacf/mgs/hazards/index.shtml to learn more about sea level rise forecasts in Maine, and find a property’s owner’s guide for coastal residents. Check out Maine Sea Grant’s Preparing for a Changing Climate at https://seagrant.umaine.edu/focus-areas/preparing-for-a-changing-climate for additional resources.

The Sea Level Rise Resiliency team at the Island Institute works to ensure island and coastal residents and community leaders have access to information and resources to help adapt to climate change, and supports businesses and municipalities in planning for and building infrastructure that improves their resilience to rising seas and other climate change impacts. More information can be found at: www.islandinstitute.org/climate-impacts 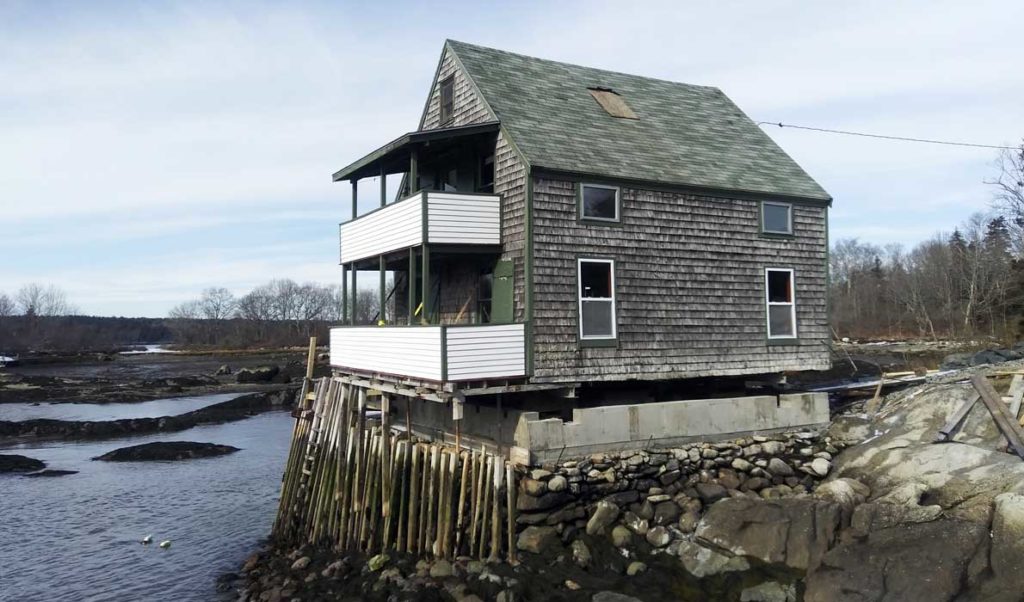