If Belfast has an icon representing it to the wider world, it’s probably the three red tugboats docked at the foot of Main Street. As pretty as those boats are, with their clean decks and fresh paint, they are not props for tourism marketing.

The Penobscot Bay Tractor Tug Co. is a business that plays a vital role in the state’s and region’s commerce, helping ships from around the world dock at ports in nearby Searsport and Bucksport, delivering liquid fuels and bulk cargoes. The investment in the three tugs alone is in the millions, but it’s not a multi-national corporation that runs these boats—it’s a family. And it’s a family with generational ties to the area.

Doug Fournier, 36, and his brother Patrick, 34, bought the former Maine Port Towboats in 2005. Their father, the late Arthur Fournier, had owned and operated the Belfast tugs from 1977 to 1990, and the brothers grew up in the business. The elder Fournier’s name still elicits smiles and stories among people of a certain age in Belfast. He was a waterfront character in upper Penobscot Bay, as well as in Portland and Boston.

With evident pride, Doug Fournier recounts how his father started working at Boston Sand & Gravel, then stepped out on his own at Pier 50 in Charlestown, Mass.

“He had a marine construction and salvage business, with cranes, barges, and tugs,” he explains. His father’s first tug was salvaged from the bottom of the Charles River, powered with a diesel engine taken from a wrecked Greyhound bus. 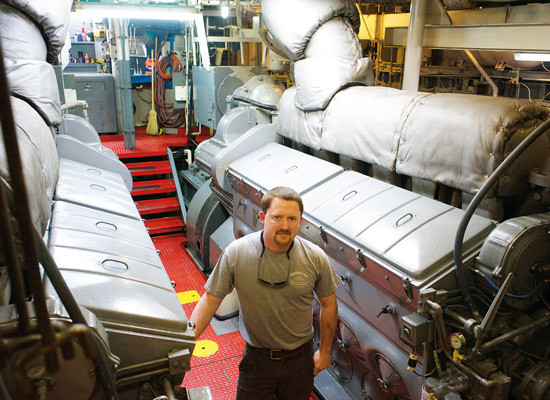 Doug Fournier in the engine room of one of his family’s tugs.

Arthur bought an existing towboat business in Belfast in 1977, and sold it in 1990, during what Doug Fournier says was a “boom time,” and moved to Portland, which was seeing three- to four-times the amount of ship traffic as Searsport and Bucksport were getting in those days.

“Paper was a big commodity that was moving along the docks at that time,” he says. With the decline in paper making, the business is changing, but the Fournier tugs handled about 90 ships last year. A recent trend is that ships are getting larger, which allows them to make fewer port calls.

Fournier holds a 1,600-ton master license, learning the ropes from his father and from being in the wheelhouse—or at the wheel—of tugs for years.

There’s a YouTube video from a Portland TV news program showing Doug and Patrick as teens operating a small tug called Pushy—an inch shorter than the length that required a license—aiding in the rescue of a ship that was on fire. In the news segment from 1997, Fournier matter-of-factly tells a reporter how he nudged the burning vessel onto mud flats so it could be extinguished by the fire department.

Watching the video now, he confesses to being terrified as the smoke enveloped the small tug. The brothers earned a Coast Guard commendation for their work.

“It’s kind of how we grew up,” he says. While in high school, he would leave class at 10 a.m. “and go work with the guys” on the boats in Portland.

With experience like that under his belt, Fournier did not need to attend a college like Maine Maritime Academy, but he says if he could do it over again, he would. He jokes that he’s already planning for his four-month-old son to attend MMA.

Dealing with ships that hail from countries around the world is easier than it might seem, Fournier says. The shipping companies employ agents who handle logistics and payment, and there are about a dozen representing the ships that come to Penobscot Bay, based mostly in Portland.

On this day, a ship carrying heating oil and gasoline was due at Searsport at 6:30 p.m., but a delay at its stop in Portland has meant it won’t arrive until 1:30 a.m. The crew has been sent home to get some rest.

The Fournier brothers captain the tugs, along with three part-time captains. The crew of eight works weekday hours, and are on-call at night, and mostly do maintenance work on the boats when they’re not assisting a ship.

“You’re constantly upgrading and improving the equipment. The paint alone…,” Fournier said. “We don’t subcontract much of the work at all,” and so Doug and Patrick are well-versed in welding, metal fabrication, wiring, plumbing, and engine repair. “My dad was the same way.”

On a tour of the three boats, from the engine rooms to state rooms (crew sometimes stay aboard overnight), to kitchen, salon, and wheelhouse, it’s evident the Fournier brothers take great pride in their boats. Hoses and pipes in the engine room are color-coded; metal surfaces are clean and painted; gear is stowed neatly.

A barge permanently tied to the shore has been converted into shop and storage space, and its bins and lockers are as well-stocked as a Home Depot. The tugs also are well stocked. Fournier remembers his father’s admonition: “There’s no hardware store at sea.”

The heart of the business, though, is the skill in easing a 600-foot-ship to and from a concrete pier. Fournier explains that the pilot, who is a captain well-versed in the local waters, boards the inbound ship off Matinicus Island, and then begins directing the tugs when they meet just south of Sears Island.

One tug takes position at the ship’s bow, the other near its stern, as it moves about 2-3 knots. Both tugs eventually turn at right angles to the ship.

“There’s a lot of finesse to it,” he says, with wind and tide playing roles.

“Equipment-wise, we’re on a very good footing,” he said. The fleet consists of the Fournier Tractor, the Capt. Arthur Fournier, and the Fournier Brothers, with lengths ranging from 85 to 100 feet; 12-cylinder, 3,500 horse-power engines; and propellers of 8- to 11-feet in diameter.

The Fournier Tractor has a “Z” drive which allows the prop to turn 360-degrees. The tug is one of just two north of Boston with this capability.

It’s hard to overstate the size of the engines, and the auxiliary equipment that keep them running, like two diesel generators in each, tanks holding hundreds of gallons of fresh water, and compressors used to start the engines.

Across the industry, the average age of the tug fleet is 45 years. The Fournier tugs are newer than average, and are dry-docked every two-and-a-half years and their hulls inspected and repaired as needed.

The next challenge is meeting a new U.S. Coast Guard regulation that requires a level of inspection equal to that of a passenger vessel. Two years ago, the Fourniers hired a consultant to create a manual of maintenance standards that must be met.

With so much at stake in moving ships loaded with volatile fuels, the job might seem highly stressful. Fournier confesses to as much, saying he savors the call from the pilot, releasing the tugs from duty as the ship returns to sea.

He also tells a story about being called to work on New Year’s Day last year to help a vessel partially disabled off Mount Desert Rock, with weather deteriorating.

“When you’re off, you’re not really off,” he said. 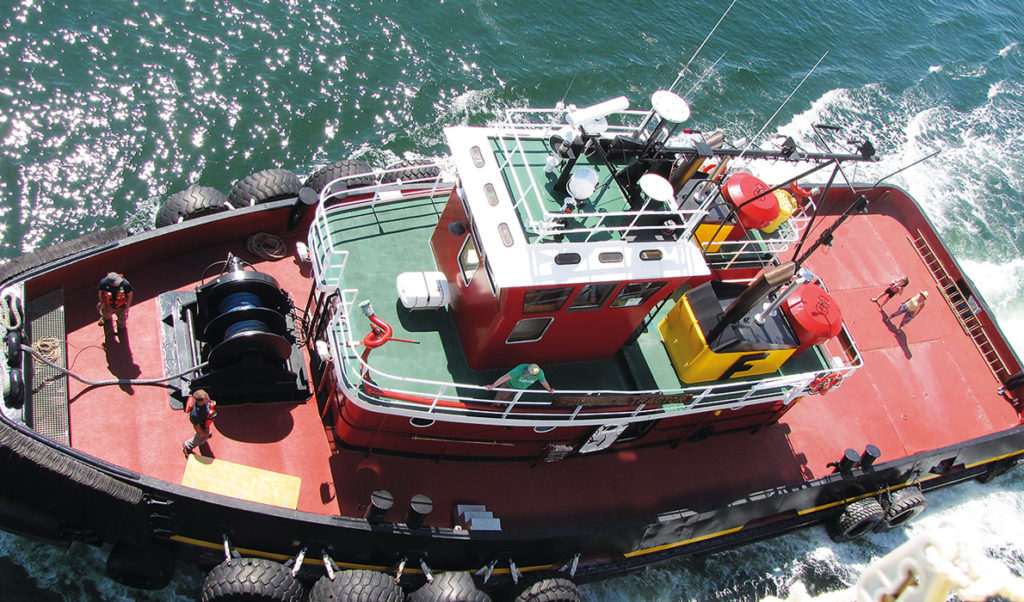