It is a well-known irony—at least along the coast—that many fishermen don’t know how to swim. According to Leonard “Buddy” Skoog, it was this paradox that drove Vinalhaven’s Lions Club to begin a Red Cross swimming program on the island 40 years ago, when he estimates some 70 percent of lobstermen couldn’t swim. Skoog, a 60-year member of the Vinalhaven Lions Club, was the chairman of the Swim Committee for 30 years.

“We got in touch with the Red Cross,” he remembered. “They would make someone available to us one week each summer. We had to hire them and provide room and board. We set the fee, but anybody who couldn’t afford to pay, the Lions picked up the bill.”

Then, said Skoog, along came Tracie Littlefield Martin (at the time, Tracie Littlefield.) Martin, a Vinalhaven native, began teaching swimming lessons for the Lions Club back in 1980 as a fresh-faced 17-year-old. First, she assisted the Red Cross instructors, and once she was certified she ran the program on her own. With the exception of five or six years in the late 1980s and early 1990s, Martin has run the program for the last 35 years. And while she didn’t run the Lions Club program during those years, she still kept enough swimming students to maintain her Red Cross certification. Martin eventually moved to the mainland, but still returns for one week each summer to teach swimming lessons.

Over the years, Martin has taught hundreds of Vinalhaven’s year-round and summer children to swim. One year, she had 101 students enrolled.

“When I first started,” she said, “kids tended to take the courses right through [Level 6.] Now they get to Level 4, when they can swim, and they stop.” In recent years, classes have averaged 35-40 students.

Martin now finds current students are the children of former students. Pam Grumbach is a summer resident who enrolled her four children, and now takes three grandchildren to the classes as well. She praised Martin for her skills as a swim instructor.

“We were always here for the summer and the kids needed to learn to swim,” Grumbach said. “After the first time, we realized she was really good. What occurred to us was that she taught safety in a place that was otherwise scary.”

Grumbach also cited an incident in which one of her grandsons became afraid during his swimming class.

“Tracie took time with him after class, one-on-one. She told him ‘I don’t want you to be afraid of the water.’ It was a real sign of the kind of person she is. She really cared about his water comfort. Her concern is each individual, not getting the subject done,” said Grumbach.

In honor of Martin’s 35 years of service to Vinalhaven, the Lions Club installed a granite bench this summer at Lawson’s Quarry where swimming lessons are held. The bench was created by Vinalhaven resident Wes Reed and engraved with words composed by another Vinalhaven resident, Phil Crossman.

The dedication reads: “Tracie Littlefield Martin—From the grateful members of the Vinalhaven Lions Club on behalf of the hundreds of children who under her watchful eye and with her endless encouragement learned to swim.”

Martin keeps coming back because “it’s where I grew up. It’s a valuable service for the kids who live here. But,” she said, “I keep looking for a replacement.” 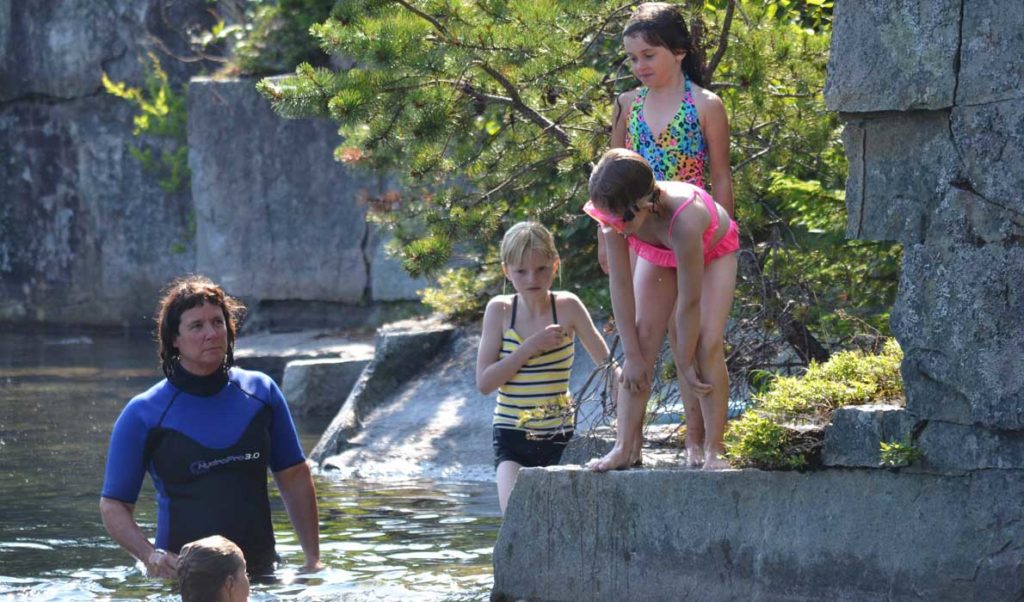