This year’s lobster stock assessment confirmed what lobstermen have been seeing out on the water—there are a lot of lobsters in the Gulf of Maine! Yet, while the assessment aligns with the skyrocketing catch, it doesn’t predict the future of the fishery.

The American Lobster Stock Assessment is conducted every five years by the Atlantic States Marine Fisheries Commission (ASMFC). The 2015 assessment was completed and accepted by peer review last month. The work is a collaboration amongst scientists from NOAA’s Northeast Fisheries Science Center and the coastal states from Maine to Maryland. Contributors compile data from the state and federal at-sea surveys, fisheries landings and interviews, and use a computerized population model to create a composite picture of each lobster stock managed by ASMFC.

The results of the assessment were no surprise. It comes down to location. The southern New England (SNE) stock remained in very poor condition, while the Gulf of Maine (GOM) and Georges Bank (GBK) stocks are thriving. “Southern New England has had almost two decades of decline with no recovery in sight. It’s not good news there at all,” said Carl Wilson, director of the Bureau of Marine Science at Maine’s Department of Marine Resources. “Georges Bank and the Gulf of Maine are at all-time highs. We’ve never seen things so good.”

What may come as a surprise is that despite the record high numbers of lobster fishermen are hauling out of the Gulf of Maine and Georges Bank, they are not overfishing the resource. The assessment says the GOM and GBK have “record high stock abundance,” are “not overfished” and are “not experiencing overfishing.”

One important change in the assessment this year is that Georges Bank and Gulf of Maine stocks are now being studied as one stock for the first time. The lobster data collected via at-sea surveys points to movement of lobster between the two areas—adult lobsters moving along the seafloor back and forth between GBK and GOM.

“This is a huge and positive step to acknowledge the connectivity between areas,” said Rick Wahle, research professor at the University of Maine’s Darling Marine Center. “This is consistent with what fishermen on outer Cape Cod have noticed for a long time. A large part of their fishery has been V-notched lobsters coming from Maine.”

Maine fishermen put a notch in the tail flipper immediately to the right of center of a lobster with eggs in order to preserve reproductive females beyond just the hatching of her eggs. The notch remains present through the next few molts, and a female with any trace of a notch is illegal to possess in Maine. Such V-notching is technically compulsory north of Cape Cod and while the practice is catching on in northern Massachusetts and New Hampshire, it is most commonly carried out in Maine.

While the Maine fishery is thriving, there are a few concerns for the future. During this time of unprecedented numbers of egg-bearing females in the Gulf of Maine, there has been a concurrent downturn in settlement of larval stage lobsters to the seafloor. According to Wahle, who leads the American Lobster Settlement Index, “there is a big gap in our understanding of deep water settlement.”

It’s still not well understood if a settlement index derived from shallow, diver-based surveys can accurately predict the future of the fishery that is increasingly moving offshore.

“A recent expansion of settlement into deeper water due to warmer temperatures could offset the downward trends that we see in shallow water,” says Wahle.

There also are important factors to consider that contributed to the crash in southern New England.

“At the end of the day, we are looking at effects of climate change and disease on a population that is at the southern edge of its geographic range,” Wahle said, “and gradually inching northward. It’s a symptom of climate change.” Two key predictors of the decline in southern New England were a decline in settlement and shell disease prevalence. The region saw a dramatic onset of shell disease in 1997 that has remained pretty consistent at 25 percent to 30 percent prevalence, which is tightly correlated with water temperature and worsens mortality.

With warming temperatures, we can also expect the continued northward movement of more southern predatory fish. Black sea bass in southern New England are commonly found with small lobsters in their stomachs.

Times are good in the Gulf of Maine fishery. Continued research to determine how a changing climate is impacting the basic biology of the lobster, such growth rates, age at maturity and settlement habitat expansion will be critical to continue this trend. 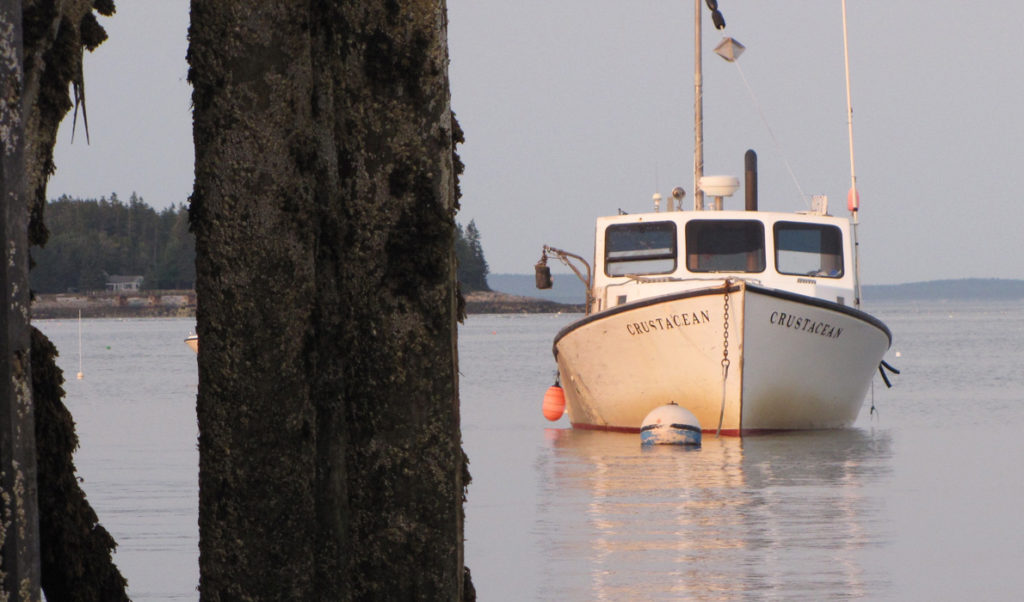