The morning dawned warm and clear. The waters around the USNS Washington Chambers were treacherous, even in this good weather. The shoals around Australia and the many reefs make the sea a dangerous place to travel.

Between Australia and Papua New Guinea, there is a stretch of ocean only a mile or so wide that’s deep enough for a ship to pass through. You wouldn’t know it, though, because all of the reefs and shoals are about chest-high underwater. To the unpracticed eye (like that of a cadet), it looks like fair water.

That’s why we brought a channel pilot on board, a master mariner who, like harbor pilots, has expert local knowledge and understanding of the waters, the currents and even the expected weather. He climbs up the side of our ship and enters the bridge, shaking hands with the captain and accepting the immediately offered coffee from the ordinary seaman on watch. While he and the navigation team get together to plan the day’s route, things are stirring up on the flight deck in the stern of the ship.

It’s been over a week since we last gave supplies to another ship by helicopter, and the naval air detachment on the Chambers has been taking the time to train the junior pilots. All they need to do is fly many hours each day, from morning until late at night. During that time they will perform various maneuvers to hone their skills at the stick. Today, they have a special treat in mind for the whole ship: air tours of the Great Barrier Reef.

The reef isn’t just local to southeast Australia, as unknowing persons who watched Finding Nemo might assume. It extends from the southeast edge of Australia all the way to the channel we are travelling through. It is so distinctively large that astronauts on the moon could see it as clearly as other land masses. The helicopter pilots send word out the day before our passage that they will give tours, four people at a time, over the north end of the reef.

Some people were skeptical, of course. Our helicopters have been rather untrustworthy—a radiator breaking here, oil filter popping there, the on-board computer fritzing out—but that didn’t stop many crew on the Chambers from putting their names down immediately.

At 1445 ship time, I stood by the flight deck with three others and the crew of the bird, wearing a helmet and life vest just in case. We climbed into the roaring machine and lifted off, buzzing over the sea to the dozens of shallow coral beds to the south.

The ship was a dot on the horizon in just minutes. Flying at 90 miles per hour, we leaned out the door from our strap-in chairs and clicked pictures left and right. The reef was magnificent in size and variety. Stingrays glided across the shallow bottom, sunning in the midday. Other strange critters swam along, looking for food or shelter amongst the coral.

Even people appeared in the shallows, a surprise to me: day-trippers who had brought small boats out and beached them on the shoals, taking a walk through the reefs.

The coral itself was mostly tan in color, another surprise after the vibrant hues of the Pixar fish film. One crewmember said that was just local; farther south it was very colorful. But even more remarkable than the reef itself was the drop into deep water: one second we were flying over the three-foot deep shallows of the reef, and the next we saw the whole thing vanish into hundreds of feet of ocean.

The thrilling parts of the tour were the maneuvers the pilots made as they continued to practice. Half of the photographs we took were from a vehicle that was almost on its side, looking out the side doors but straight down at the ground only a hundred feet below. The jolt in your stomach and the catch in your breath when a combat helicopter goes from 90 mph to a stop, and then makes a tight turn in its own length are worth a million words. All the while we held on for dear life to our cameras, because ain’t nobody going down to get them back for us.

Alas, the helicopter could not stay out forever, and we flew back to the ship, our lives on the deep seeming slightly more mundane, our horizons expanded a little bit more. There are a million and one things to see and do on the ocean, but most days you aren’t capable of doing them all. It is always wise to take up the opportunity for a pleasure flight over the Great Barrier Reef.

Benjamin Stevens of Islesford (Little Cranberry Island) is a cadet at Maine Maritime Academy in Castine. This summer, he is working aboard a navy supply ship. 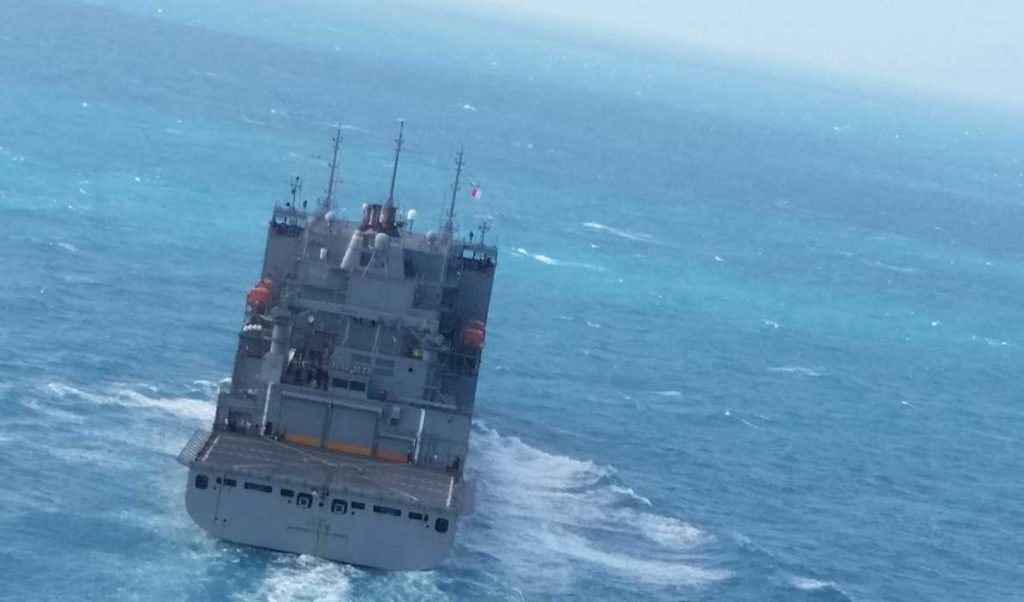 The USNS Washington Chambers photographed from a helicopter.