The young woman has been lobstering since she was 13, works several shifts weekly at the busy Rock City coffee shop in Rockland, and, at 19, has already completed enough courses at the University of Maine at Augusta’s Rockland campus—known locally as URock—to earn an associate’s degree. And this fall, she’s bound for the University of Maine in Orono.

The St. George native graduated from Midcoast Christian Academy in Thomaston in June 2017, and began college classes that fall.

“I thought that I’d want to go into law or something like that,” she says. Not coincidentally, her boat is named Justice.And in fact, ongoing policy debates and the laws that regulate the industry piqued her interest in studying law.

When she starts classes in Orono, she may focus on business, especially after taking six business classes at URock.

“It’s been something I’ve liked,” she says, and notes that UMaine has a well-regarded master’s business degree. Psychology also is a possible major.

“I try to make it through without loans,” she said of college, and a scholarship from the Maine Lobstermen’s Association has helped. Knocking off the associate’s degree around a part-time job and fishing, even though it has meant a harried schedule, has worked out well, she says, and seems to have been a better approach then heading to Orono right out of high school. 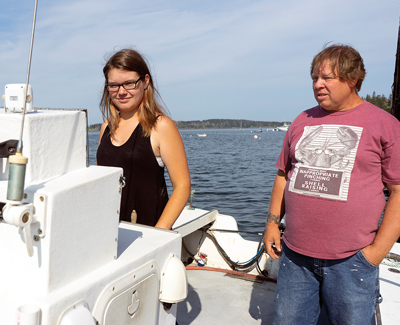 “It’s been easier to do it in two-year increments,” in part because she has been able to live at home.

She began working at the coffee shop in November of 2017, but fishing has been in her blood for much longer.

Her grandfather fished out of New Bedford, Mass., in the 1980s. Her uncle, Jimmy Weaver, who also fished, died when the boat he was working on sank in late November 2006. The tragedy looms large in her family, but it did not discourage her from pursuing fishing.

In fact, her late uncle’s son continued fishing, and Danielle concluded that she could, too.

“It seemed pretty simple. It seemed like something I could viably do,” she said. So in the summer of 2013, at age 13, she and her father took Uncle Jimmy’s old—and leaky— 14-foot skiff and headed out.

“I started hauling by hand,” though the 20-30 traps were the smaller, “mouse trap” version. “I very quickly started to gain the muscle mass,” she says. “I think my first check was for like $25.”

Then it was on to a 16-foot Amesbury Dory, “a flat-bottomed, more stable boat,” but she was still hauling traps by hand.

As a senior in high school, Weaver secured an adult license, and now fishes from a 19-foot center console boat—with a hydraulic hauler. She sets 150 traps on the lower St. George River.

This year, with the lobster molt delayed owing to colder water, has not been lucrative. In the past, she has been able put some money away at the end of the season, but this year, “It’s been sad, at best.”

Like many women, Weaver wears colorful bracelets on her wrists, but they are not standard jewelry, as she explains. Each bracelet is a tag from her lobster traps, representing the years she has fished (the colors change, year-to-year)—five on one arm, one on the other.

Being a girl, and now a young woman, in a male-dominated business has drawn mixed reactions. Some say, “’Yeah, you can do that, who cares if you’re a girl,’” but others tell Weaver she shouldn’t be in the business.

“It’s weird. Last time I checked, the lobsters don’t care. As long as you put in the effort, you can do it.”

That approach should serve her well in her next challenge. 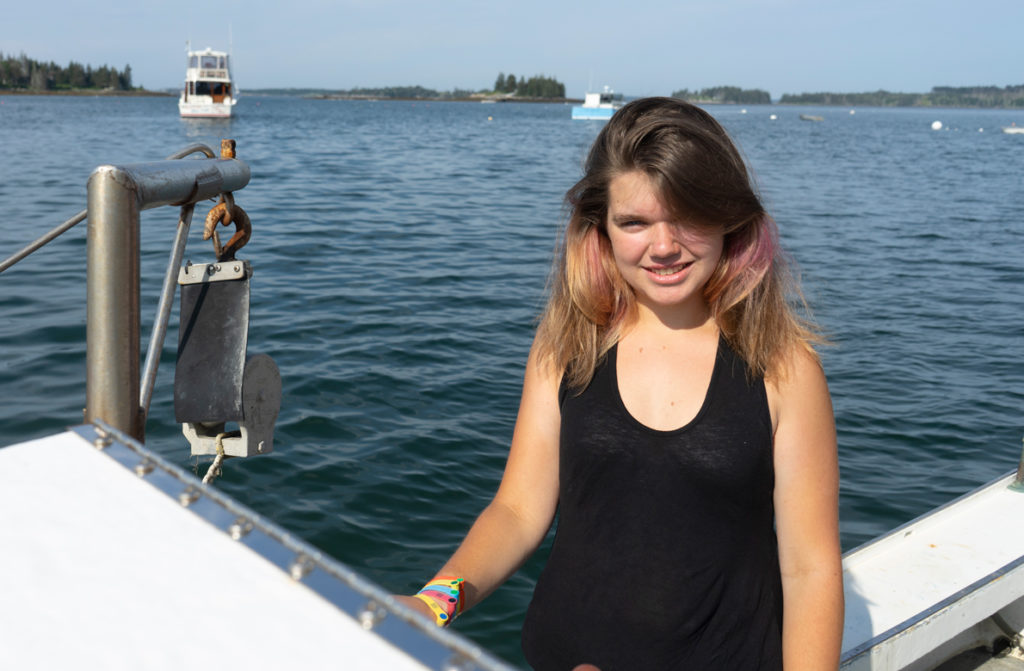