The Maine Coast Fishermen’s Association has won a $5,000 grant to promote mental health awareness in the commercial fishing industry.

Monique Coombs, director of marine programs for the nonprofit, said the funds will be used to develop informational materials to assist commercial fishermen in managing stress, anxiety, and depression, as well as materials showing how to stay mentally fit. A website with phone numbers for fishermen to reach out for help may also be in the works.

The grant was awarded by the Fisher Charitable Trust.

Coombs said fishermen may be experiencing stress due to changes in the industry over which they have no control. The ever-present danger in the work also adds stress.

“It’s not fishing that produces stress for fishermen,” she said. “Many of them love being out on the water. It’s dealing with a lot of uncertainty due to things like climate and regulation changes, and how those things are going to impact their business and income.”

According to the National Institute for Occupational Safety and Health, commercial fishing is one of the most dangerous occupations in the U.S. Its data shows that commercial fishermen experienced a fatality rate of 114 deaths per 100,000 full-time equivalent workers between 2000 and 2017. That compares to an average of four deaths per 100,000 full-time equivalents among all U.S. workers.

Common hazards include vessel disasters, falls overboard, and a variety of onboard gear and equipment.

Coombs said fishing is a very isolating industry, with some fishermen out on the water and away from families for days at a time, which adds to stress.

“Depression, anxiety, and thoughts of suicide are not uncommon in any fishing community, no matter which coast you are on,” said Coombs. “It is an isolating, dangerous occupation, full of uncertainty and expense.”

The grant is just a beginning, she said, but it’s a step toward bringing issues into the open to be addressed. The hope is to humanize the fishing industry and make the public aware of stressors fishermen face every day.

Alex Todd, a 10th generation fisherman from Chebeague Island, said changing regulations, such as those concerning right whale protections, are among the biggest stressors for him.

“There’s also a lot less mobility between fisheries today due to licensing issues, which makes things more stressful, too,” he added. “I know some fishermen have gotten therapy and it’s helped them, but many are reluctant to admit they need help.

“I get relief from stress by going to the gym or playing my guitar, but everybody is different,” Todd said. “I appreciate what the Maine Coast Fishermen’s Association is trying to do by drawing attention to these issues.” 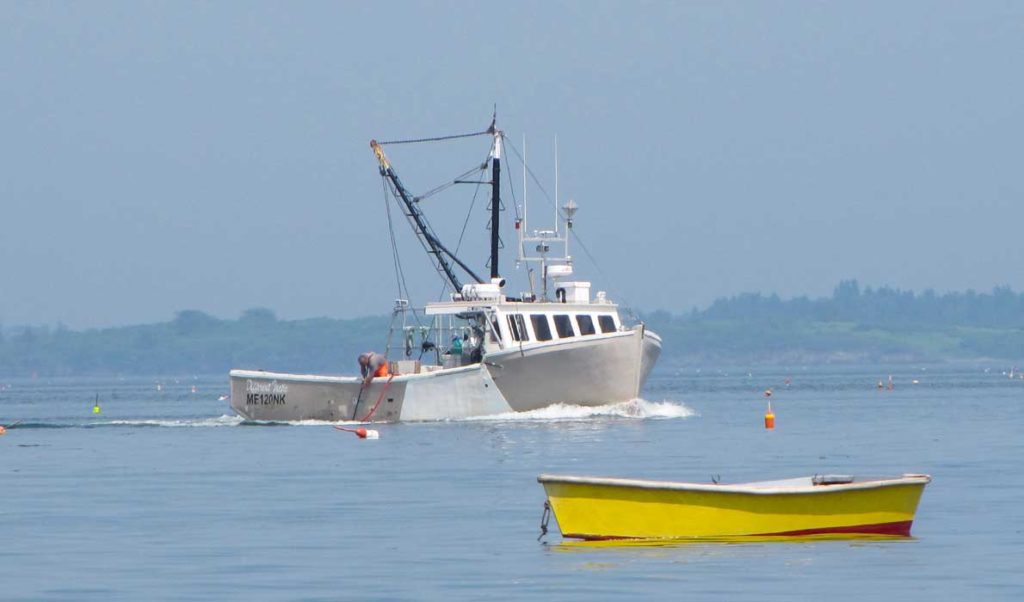 A fishing boat off Chebeague Island.