Scallop farming in Maine has been in a long period of gestation. But after initial trials to market last year, it’s about ready to debut as a commercial venture.

The young industry leverages technology transfers from counterparts in Japan. And a new analysis shows promising marketing potential for this new aquaculture product.

Stakeholders are studying the “ear hanging” method of cultivation. The technique begins with passive collection of wild spat in collector bags, followed by initial grow-out in “lantern nets”—tiered mesh cylinders that hang in the water from a longline. “Ear hanging” refers to the practice of drilling a small hole in the hinge or “ear” of a scallop, and inserting specialized pins that attach the scallop to rope lines in the water. The scallops grow to market size in a year or two.

Marsden Brewer, a lifelong commercial fisherman in Stonington and president of the recently formed Maine Aquaculture Co-op—a scallop-farming co-op in Tenants Harbor—is an early instigator. He began experimenting by collecting and growing spat in 1998, and has since collaborated with scientists on research. Several years ago, he received an experimental lease permit from the state to grow scallops; he’s also traveled to Japan with fellow fishermen and co-op members to learn about ear hanging.

“Every year has been one piece of the puzzle that slows you down,” said Brewer, speaking as part of a panel at the Maine Fishermen’s Forum on March 2. “But you solve it and move forward.”

Brewer said the market appears to be ripe, with a decent price, for farmed scallops in the 2½- to 3-inch range. Wild-caught scallops already fulfill market demand for sizes of 4 inches and above, he noted.

Japan is a leader in farmed scallops. Research there began in the 1930s. In the 1990s, Japan’s wild scallop resource declined, prompting renewed focus on aquaculture. Ear hanging is commonly used.

According to a market analysis released in January by Coastal Enterprises Inc., the ear hung method has high upfront costs of $100,000 or more for equipment. And it requires labor-intensive research to fine-tune methods to specific sites.

Other challenges include climate change and biotoxins, which could pose environmental threats. And, like any high-end niche market, the industry is vulnerable to recession.

But overall, the analysis says, the outlook is promising, given factors like Maine’s strong brand and its ability to command premium prices, and a regulatory and cultural environment supportive of aquaculture.

“There was an exorbitant amount of work to be done before it could happen,” said McPherson, who described a bootstrap process of leveraging Glidden Point connections, determining inventory, and understanding basic factors like shelf life.

“We just did it by doing it,” he said. “We dealt with chefs who would have a genuine conversation with us and tell us how the product was received and what they were looking for. We’d stage a harvest on Tuesday, then ship to New York, Boston, FedEx around the country overnight. So everything got to the chefs on Wednesday. That worked out well.”

Some chefs didn’t know how to use or store the product, so there was an education push, he said.

“It was very grassroots,” he said. “But chefs felt like they were part of the new product.”

Brewer and his son Bob were instrumental on the harvest side, and even went so far as to gather recipes from Stonington to share with chefs, McPherson said.

“It was received extremely well,” he said. “I think, going forward, next steps include understanding our capabilities. As more farms get involved, each will have its operations and successes. It’s a competitive market. We saw a little bit of competition this year, from bay scallops and foreign imports. But I’m super optimistic that this will win every day of the week.” 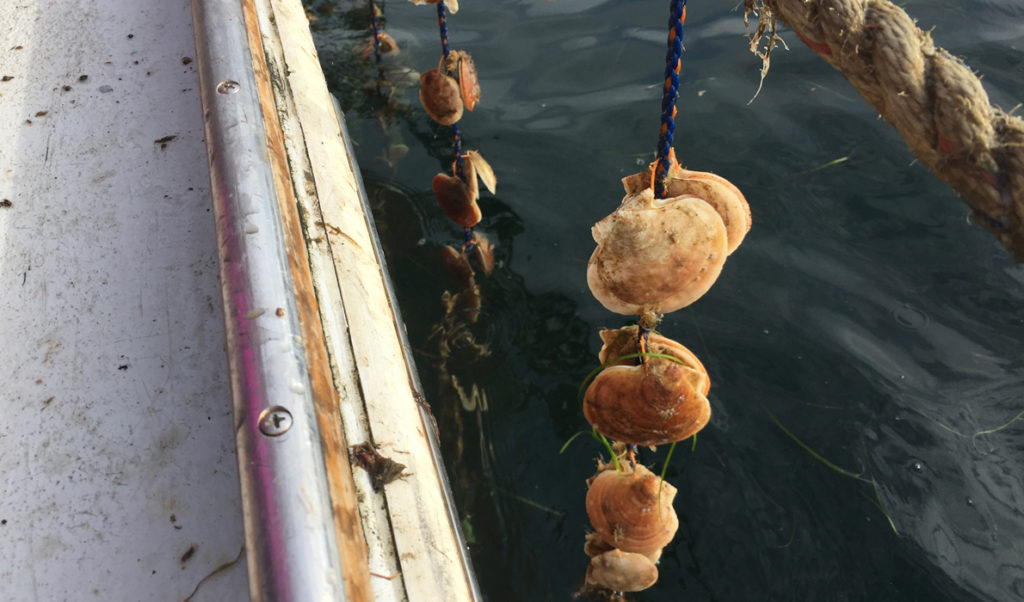 Scallops being grown on ropes.