Charles Salerno surveys the scene with a sharp eye. Several figures in bright yellow and orange jackets and pants crawl up to a doorway, their breathing masks and oxygen tanks making movement difficult. Their helmets bounce off of one another’s visors, and their heavy gloves make handling the 2-inch hose cumbersome.

These firefighters must overcome their discomfort, though, because a fire roars in the galley of the training ship State of Maine.

At least, it does in theory.

With any luck, the students at Maine Maritime Academy will never have to fight a real fire, but they train for one just the same. In charge of the operation are Charles Salerno and Gabrielle Wells, the cadet chief mates on the training ship. On their shoulders rests more responsibility than most college juniors ever have to carry. They have to prepare the emergency squad for life and danger at sea for the academy’s summer training cruise.

When a fire breaks out on a ship far off in the ocean, no shiny pump truck will drive out to deal with the blaze. It takes a dedicated crew of courageous sailors to gather together in their firefighting equipment and douse the blaze themselves, which is why students at Maine Maritime Academy train in their very first semester for their marine firefighting licenses.

Among the students on the cruise, the emergency squad is special. They are a group of volunteers pulled from the ranks of the freshmen and junior midshipmen. They will be the first ones on the scene if a fire breaks out on their voyage. These are men and women mostly between ages 18 and 21, but they have trained for this kind of activity for some time.

“It’s a lot of responsibility for the freshmen this year,” says Salerno after a Thursday afternoon drill draws to a close. “There aren’t many juniors.” Traditionally, the leadership roles of the training cruise fall on the junior class, whose members have more experience both with the training ship and the industry from their cadet shipping experiences.

This year, the junior class is split, with half going on one cruise to Spain and the others to Ireland. The freshmen will be on duty all 90 days.

Today’s drill is a galley fire, and it’s the first day this season that the emergency squad has done full turn-out with all of their equipment, including breathing apparatus and auxiliary firefighting equipment. Some of it is unfamiliar to the new cadets.

“They struggled at first with procedure,” says Wells as the squad winds through the narrow passageways of the training ship, “but they’ve learned quickly who goes where, and what tools to use in which spaces.”

Shipboard firefighting isn’t like fighting a building fire. A fire on land can be doused by pouring tons of water onto it, cooling it down and eventually extinguishing it. On a ship, though, water is generally best left outside, and the more a firefighter pours into the interior of a vessel, the less stable the situation becomes.

In today’s drill the squad tries out the eductor, a jet pump used to pour foam onto grease and oil fires. Instead of pouring water onto a blaze, the foam coats the area in a blanket that smothers the fire.

Wells and Salerno answer to the chief mate of the training ship, Brendan McAvoy. His policy is strict when it comes to the emergency squad. Salerno explains to the cadets that it’s because of the severity of their job.

“You are completely essential to the safety of the vessel,” he says in a briefing. “The chief mate might get loud, but it’s because he’s passionate about doing it right. Have a sense of urgency.”

Austin Bottorf, the cadet master responsible for all operations on the training cruise, was optimistic in the face of upcoming Coast Guard inspections, when the squad will be tested on its efficiency and technique.

“I like the state of E-squad this year,” he said. “They are well prepared.”

The training cruise begins on May 1, with ports of call in Spain, Ireland and the U.S. 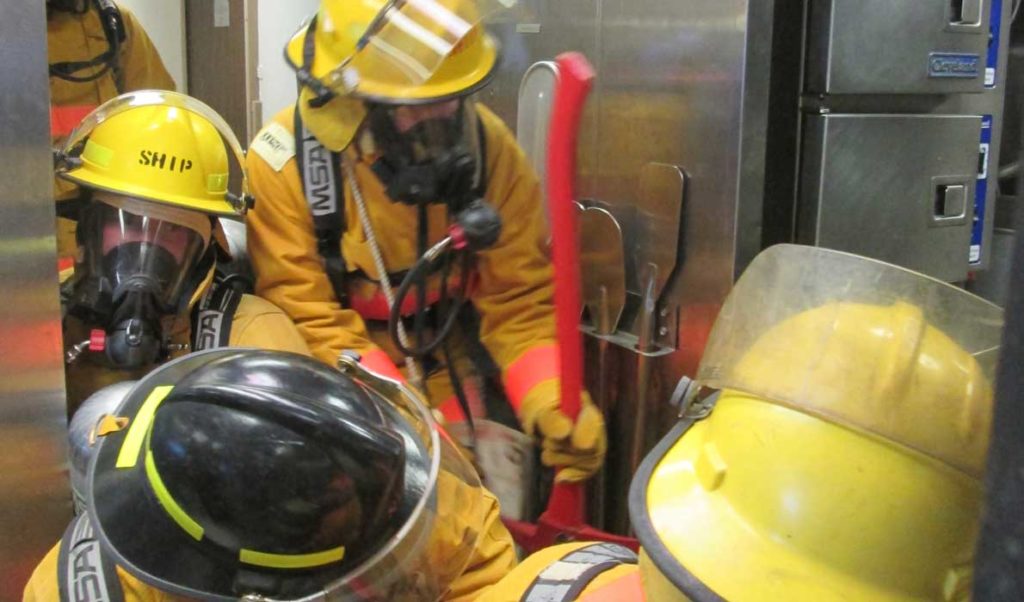 Firefighters squeeze into the galley to fight a simulated grease fire.