On the rocky headlands of the Schoodic Peninsula, the narrow ledges between the edge of the spruce forest and tide-scraped granite are carpeted in black crowberry, an evergreen shrub with tiny purplish flowers and dark fruits.

Crowberry grows in less than 1 percent of the state, but here in Acadia it is fairly common, and important—its creeping mats help reduce coastal erosion and host the rare crowberry blue butterfly.

The “rugged coast of Downeast Maine,” a place people have long sought for solitude, rest, inspiration, fresh air, and scenic beauty, is also a place where plants and animals that need cooler climates have found refuge. Like the black crowberry that carpets the Schoodic cliffs, Arctic blue-flag iris and roseroot sprout between sheltered rocks at Schoodic Point, while gnarled jack pines soak up the salty clouds that drift up Schoodic Head, and mink frogs wait until the middle of the night to sound their knocking calls from ponds and swamps.

They survive in Acadia National Park, at the extreme edge of their range, because the varied topography and proximity to the ocean create microclimates, pockets and patches where the temperature stays cool even when the surrounding landscape is heating up. Scientists call such places “climate change refugia.”

Managers with the National Park Service, U.S. Fish and Wildlife Service, The Nature Conservancy, and other stewards of protected lands are interested in such areas because they may be resistant to broader scale climate changes, where vulnerable species might survive.

Knowing how habitats and species will shift in the future can guide management of landscapes in the present. Dr. Jennifer Smetzer of Smith College, a 2018 Second Century Stewardship Fellow through the Schoodic Institute, and Dr. Toni Lyn Morelli of the University of Massachusetts Amherst and the USGS Northeast Climate Adaptation Science Center used land cover data and new fine-scale climate projections to produce maps of potential refugia in Maine under different climate change scenarios. Smetzer’s research focused on a subset of plants and animals that were identified as priorities by the National Park Service and other federal, state, and nonprofit conservation organizations.

“In the future, some species may shift inland, while others may have most of their habitat in far northern Maine,” said Smetzer. “But many species will persist only along the coast.”

According to Smetzer’s maps, the Downeast coast is expected to continue to shelter paper birch, chestnut-sided warblers, magnolia warblers, red spruce, three-toothed cinquefoil, Labrador tea, and Northern flying squirrel, and it will provide the only local place of refuge for balsam fir and black crowberry.

The coast of Maine has provided refuge in the past. When thick glaciers spread over much of North America during the last Ice Age, many local populations of flora and fauna died, but some trees and plants kept growing in warm pockets at the edge of the ice, and some animals fled to new territory, including out on the northeastern shelf of the ancient Atlantic.

When the climate warmed and the ice melted, they found their way back to where the sea keeps the shore awash in cool air and salt-laden fog. Red spruce, for example, continued to grow on the Downeast coast as it disappeared from the rest of Maine during a warm period thousands of years ago.

The forecast is most dire for crowberry and two other shrubby plants, three-toothed cinquefoil and Labrador tea, and for Bicknell’s thrush and mink frog. Black crowberry is predicted to potentially decline by 99.5 percent over the next century in Maine if current greenhouse gas emissions continue. To find it, the crowberry blue butterfly will need to go to the southern edges of Isle au Haut, Long Island, and Great Duck Island. As in the past, some species that disappear from the rest of Maine may survive along the very edge.

And in those fringes of purple, Jenny Smetzer sees hope.

“The whole concept of refugia, and the collaborative process used to create the maps, are useful from a management standpoint because they can help us prioritize locations for action, and can help us use limited conservation dollars more efficiently,” said Smetzer. “Perhaps more importantly, they also provide hope in a climate change narrative that all too often is primarily doom and gloom.”

Just knowing that certain species may take refuge here can help land managers who are otherwise overwhelmed by uncertainty.  In stories from the past, and models of the future, pockets and patches of hope can be found all along this rugged coast. 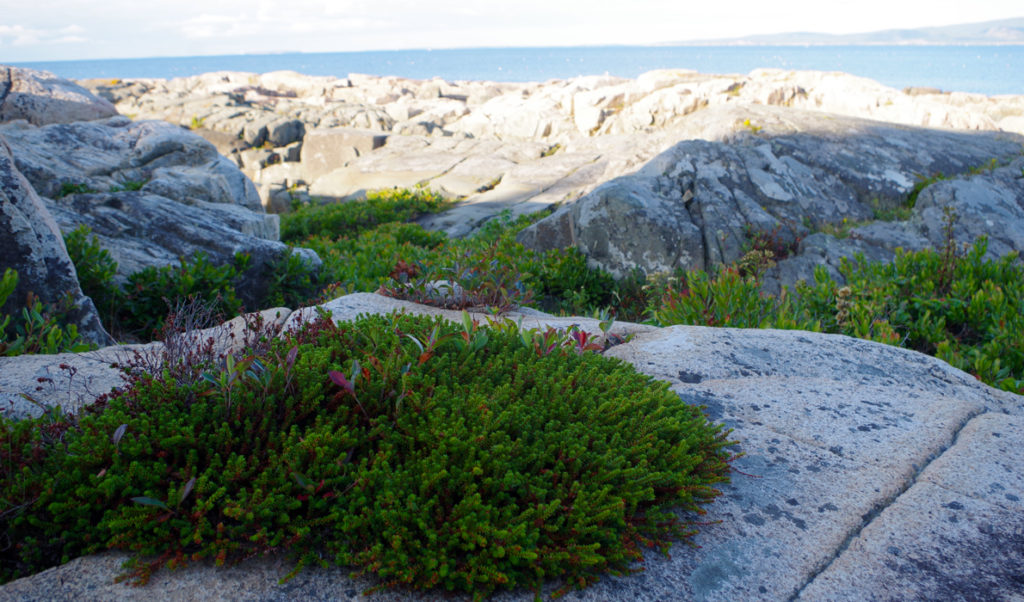 Black crowberry on the Schoodic Peninsula.