A version of this column first appeared in Landings, the newsletter of the Maine Lobstermen’s Community Alliance and is reprinted here with permission.

Thinking about a new boat? Knowing how to pay for it is important.

To help fishermen better understand financial management, the Vinalhaven Coop brought some experts from Camden National Bank and Davidson Associates to the island for a meeting to offer critical advice.

Bankers want to hear from you

Chad Place, a commercial banking officer with Camden National Bank who works closely with fishermen, said when looking at a loan application, he considers assets, debts, income history and business plan. If fishermen share their latest tax return with the bank each spring, it’s easier to authorize an emergency line of credit.

He also appreciates fishermen stopping by to talk about the state of the industry—bait, fuel and prices.

Banks also consider the size of a down payment, because it means applicants are sharing some of the risk of the loan. Fishermen can start a Capital Construction Fund, or CCF, to save for the down payment on a new boat or to repower an existing boat.

Fishermen who set up a CCF can write off the money they add to the fund each year. The IRS treats contributions to a CCF like any other business expense, allowing fishermen to shelter additional revenue from their fishing business in years where fishing is good.

Sam Davidson of Davidson Associates, an accountant who has worked for years with the fishing industry, has helped set up many CCFs. As a government program, there are a couple of catches and required paperwork.

To be eligible, you must be running an active fishing business, own a U.S. built vessel that is over 2 net tons, and the vessel must be federally documented.

Required annual paperwork filed with the National Marine Fisheries Service includes the amount of the contributions to the CCF, a plan for using the funds, and tax returns.

The program does have some flexibility on those plans, though.

Say you set up a CCF, made regularly contributions and have saved $80,000 and are ready buy a new engine. The boat yard drops the new engine in and you pay for it from your CCF.

At tax time, the IRS will note that you used your CCF to pay for the new engine. Since you have already written off these funds in previous years through your contributions, you cannot claim another deduction for the expense. This means you cannot depreciate the engine nor can you take the entire $80,000 in this tax year. The government won’t let you double count your deductions.

The other catch is that you have to contribute at least 2 percent of your total target for the fund each year. Recognizing that fishing is an uncertain business, NMFS allows you to not contribute for two years, as long as you contribute 6 percent of the total fund target in the third year.

There also are penalties for withdrawing the funds and not using them for an eligible purpose; you can’t pay for a vacation or house repairs with the CCF.

If you expect to owe taxes on your fishing business this year, you can increase your deductions now, pay less in taxes this year, and save money for a future expense that might hit during a year when fishing isn’t as good. If you know you are going to need a new engine or are looking at buying a new boat in the next five to 15 years, the CCF allows you to put money away now and get a tax benefit this year.

As small business owners, there are other deductions Maine fishermen can take, such as plans that allow money to be put away now to avoid paying taxes on it until retirement. Vehicles such as SEP IRA and solo 401(k) also may work to lower your tax bill.

Brooks Stevens, a financial advisor at Camden Financial (a subsidiary of Camden National Bank), said accountants help identify the appropriate retirement vehicles. For a younger fisherman, this might be a riskier portfolio with high growth potential. For somebody older, it might be a more conservative portfolio or something aimed at providing income.

“I want to make sure fishermen of my generation are prepared for retirement,” Stevens said, “and that I am providing those who are nearer to retirement with strategies that keep them financially secure.”

Emily Lane, administrative manager for the Vinalhaven Fisherman’s Coop, said the seminar is the first of many such programs the coop plans to offer.

Those interested in having a similar meeting at your coop, dock or in your community, contact me at the Island Institute: nbattista@islandinstitute.org or 691-3554

Nick Battista is director of marine programs at the Island Institute, publisher of The Working Waterfront. He can be reached at: nbattista@islandinstitute.org. 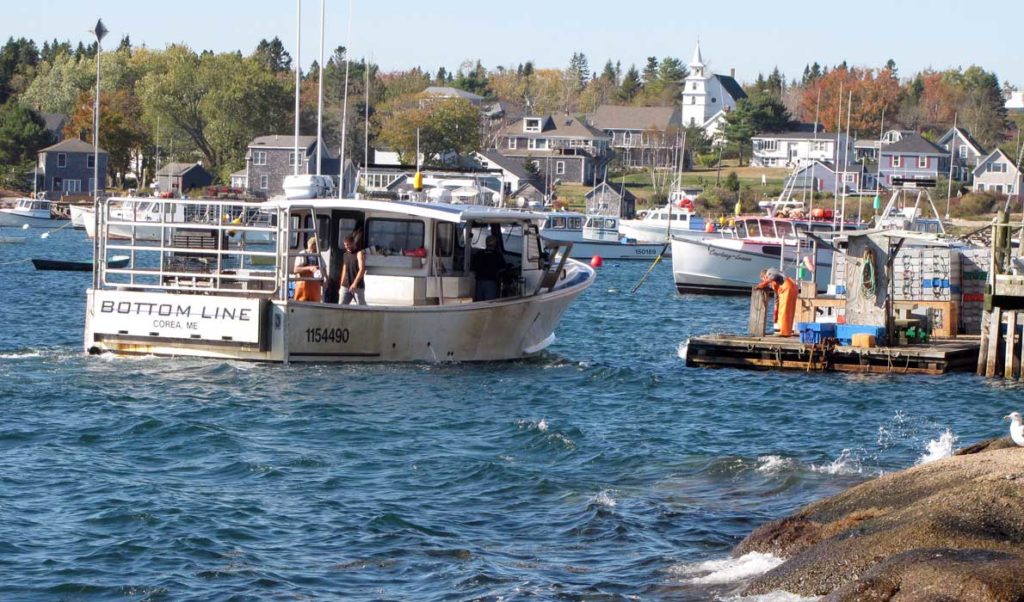