The state ferry service is concerned about a recent trend in which more emergency boat trips are made from the islands to the mainland, disrupting scheduled trips.

At its March 1 meeting in Rockland, the ferry advisory board learned from ferry service manager Mark Higgins that statistics from the last five years show an increase.

In most cases, the ferry makes its last trip of the day to the island, and the vessel stays in the pen there so that if a medical emergency requires transport, the boat is on site. But if the ferry must run to transport a patient suffering a heart attack, or the victim of a car crash, the first trip of the following morning often is cancelled.

The morning trips are canceled because the captain and crews must adhere to hours-of-rest requirements. Or, if the seas were particularly rough during the after-hours trip, the captain may have decided to keep the boat on the mainland overnight.

“It’s still trending upward this year,” Higgins said. “I could see us easily having 200 emergency trips this year.”

One possible explanation is the aging population on islands.

Eva Murray of Matinicus, who chairs the ferry advisory board and who also is a volunteer emergency medical technician and a pilot, said the private Penobscot Island Air service has seen a spike in medical evacuation flights. She speculated that in addition to the aging population, the increase could be attributed to emergency service protocols that betray a reluctance to risk treat patients on-island.

The directive, whether spoken or unspoken, is “If there’s any doubt at all, send them to the mainland,” Murray said. “I think it’s a trend in society in general.”

Higgins agreed, noting that the ferry should be considered a last resort to transporting someone facing a medical emergency to the mainland. Other options, depending on factors like weather, include Lifeflight of Maine, the air-borne medical evacuation service, and private water taxis.

“It’s blowing 60 (mph), it’s the North Atlantic,” and a decision must be made, often about a fellow islander whom the captain may know. “It puts captains in a tough situation.”
Jennifer Smith of the Department of Transportation, which oversees the ferry service, said the impact of a night emergency ferry run may linger as long as 48 hours in the busy summer months, since extra runs are not scheduled to move the backlog of vehicles and passengers. A captain awakened to make a late-night trip may not be able to get back to sleep on returning home, thereby potentially impacting his judgement and skills.

In answer to a question from advisory board member Lisa Shields of North Haven, Higgins said the service gets few complaints about canceled trips. Islanders understand, Shields said, that anyone could need the service.

Higgins plans on meeting with island emergency service managers and volunteers in the coming weeks, he said, to discuss protocols.

Murray said emergency responders must determine the relative medical threat of a broken arm compared with a heart attack.

“There are misunderstandings about what an emergency is,” she said. 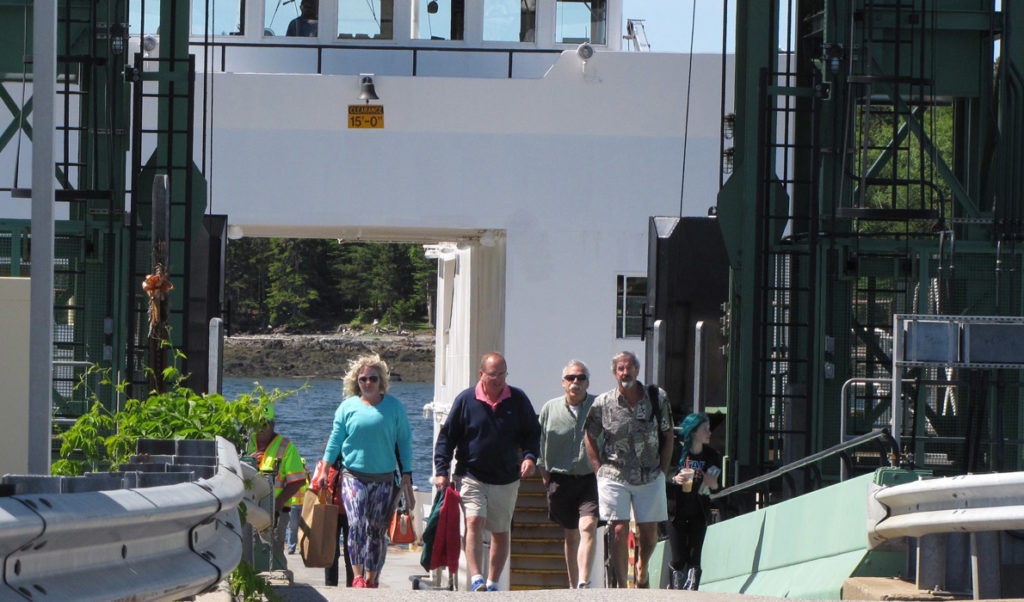 Passengers disembark from the Islesboro ferry.