A new Maine State Ferry Service rate plan will be implemented beginning May 21. The new fare structure eliminates the on-island discount in favor of a price consistent at both mainland and island terminals, and also is consistent among the six islands the state ferries serve: Frenchboro, Swan’s Island, Islesboro, North Haven, Vinalhaven, and Matinicus.

It reduces rates for passage from the mainland to all the islands except Islesboro. Residents, commuters, and business owners who rely on the ferry to and from Islesboro have been sharply critical of the new plan, which raises the rate for a driver and car from $13.75 for a ticket purchased on-island to $30 regardless of where purchased. Island town officials have hired lawyers to fight the state on its higher rates.

The decision on the plan was made by Department of Transportation Commissioner David Bernhardt last month. DOT oversees the ferry service.

The impetus for the change came because state law requires the service to be funded in equal parts from ferry fares and the state highway fund. In recent years, the service has had to use more money from the highway fund. DOT believes the new fare structure will balance the funding.

Late last year, DOT proposed a seasonal rate structure, with higher rates during the summer months. Members of the islander citizen ferry advisory board opposed the plan, arguing that year-round residents often use the ferry more in the summer months than in the off-season.

DOT then proposed a state-resident, non-resident structure, but advisory board members opposed it, arguing it penalized summer residents, many of whom play important roles in island life. The in-state, out-of-state plan was aired at public hearings earlier this year on three islands and widely condemned.

“We decided to go with the flat rate structure because there was such opposition to the in-state, out-of-state proposal,” ferry service manager Mark Higgins said at the May 3 advisory board meeting.

Islesboro residents at the meeting criticized Higgins and DOT. Arch Gillies, a selectman on the island, noted there had been no public discussion of the flat rate increase prior to it being adopted, and that the hearings gathered comment on a different proposal.

“We never heard any suggestion of this plan,” Gillies said. “There’s no great rush to do this.” The town has hired lawyers to litigate the island’s opposition, he said. “That’s not a threat. That’s a fact.”

Town Manager Janet Anderson, who is Islesboro’s representative to the advisory board, said the increase “will be devastating for Islesboro residents.”

Islesboro resident Lisa Satchfield was more direct in her criticism.

“It’s not equitable in any way,” she said of the increase. “You obviously don’t care. You’ve made it our emergency.”

Another Islesboro resident, John Mitchell, an island native who returned in retirement, described how he and his wife try to consolidate trips to the mainland around medical appointments. The increased cost, he said, is “severe. Not serious. Really severe.”

Though the new rate of $11 for an adult traveling round-trip as a passenger is just $1 higher than the price charged at the Lincolnville Beach terminal, it is twice the $5.50 rate for a ticket purchased at the Islesboro terminal under the old system. The ferry service has been advocating for ending the on-island discounts for many months, arguing it is discriminatory, makes revenue projections difficult, and is easily gamed by non-islanders in the know, who, for example, purchase a one-way mainland ticket then always buy on-island round-trip tickets.

Jennifer Smith, an assistant to the DOT commissioner, called the fare structure arrived at “a very complex decision.”

Members of the advisory board did not support Islesboro’s concerns about the new rates.

“Islesboro has been paying a much lower rate for years,” said Lisa Shields of North Haven, though she admitted the change was drastic.

Vinalhaven Town Manager Andy Dorr reported that the island’s board of selectmen supported the new rates. Sonny Sprague, the representative from Swan’s Island and a selectman there, said his island’s board “believes it’s fair. This will equalize it.”

Duncan Bond of Frenchboro also supported the change, noting that trips to his island saw a substantial decrease in cost. Eva Murray of Matinicus echoed that sentiment, noting that it was awkward to be serving as chairwoman of the board when fares to her island had decreased substantially.

“We didn’t know about it and we didn’t lobby for it,” she said.

In late April, the ferry service received an online comment suggesting bombing the terminal which it deemed a threat, and in a letter to Islesboro’s town manager, DOT warned that service would be discontinued if ferry facilities and staff were determined to be at risk of violence.

The letter prompted Islesboro’s Satchfield to demand ferry service manager Higgins apologize, but he refused, saying even off-hand remarks about violence must be taken seriously, just as they would at an airport. 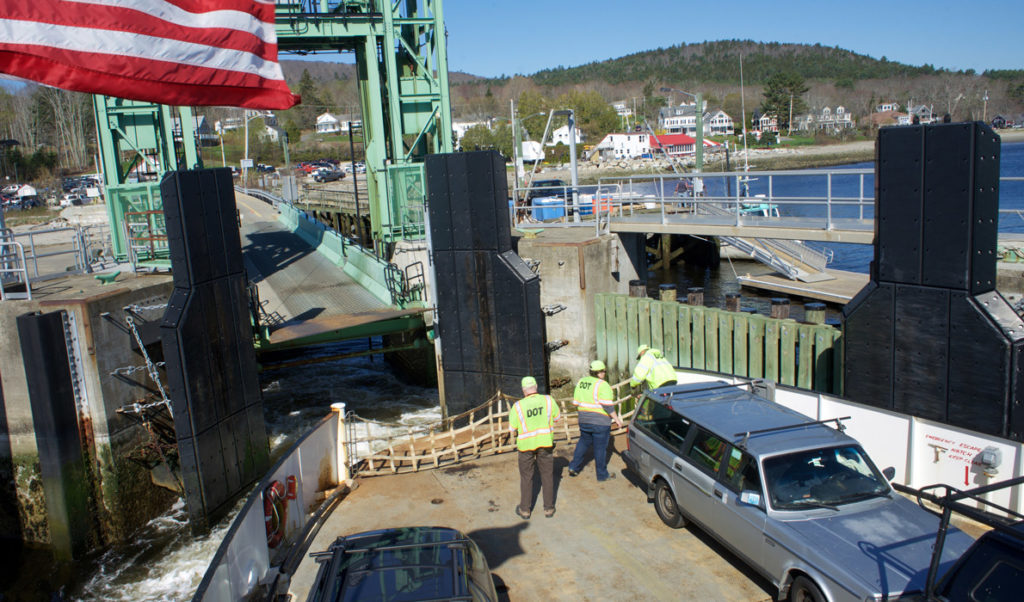 The ferry departs Lincolnville for Islesboro.