A blast from the past provided some drama late into a two-hour long public hearing on proposed ferry rate changes.

Bill Kelly of Islesboro, who serves as vice-chairman of the island school board, had researched the genesis of the Department of Transportation statutory commitment to funding the Maine State Ferry Service with 50 percent from the state highway fund and 50 percent from fares and fees. The state provides service to Matinicus, Vinalhaven, North Haven, Islesboro, Swan’s Island, and Frenchboro.

The statute dates to 2006, Kelly found. But the drama came when Kelly, who is an attorney, revealed that it was Bruce Van Note, then a deputy commissioner at DOT, who testified in favor of the 50/50 funding formula being enshrined in statute.

Van Note, who was named DOT commissioner by Gov. Janet Mills late last year, said he had no memory of the Feb. 14, 2006 hearing of the legislature’s Transportation Committee.

Kelly also noted that the move seemed to have been spurred by a $300,000 spike in the cost of diesel fuel for the ferries, and a $109,000 increase in wages that followed a collective bargaining agreement between the state and ferry service employees.

In late 2017, the ferry service initiated consideration of fare hikes because the highway fund, which also pays for much of the road and bridge work in Maine, was providing more than half of the ferry service costs.

Kelly asserted that a fuel cost hike and a new wage plan did not seem to be good reasons for establishing the 50/50 formula.

But Van Note countered that what had been an informal split between the highway fund and fares needed to be made formal.

“It was, year-to-year, less reliable, and generally, less than 50 percent,” he said of the fare part of the split. The new law “provided reliability.”
He also said the now-mandated 50 percent from the highway fund represented “a high-water mark” for state subsidy. Those who live in towns not linked in any way to the islands “have a very different view” of the 50/50 formula, Van Note said.

He also referred to a recent meeting of the Ferry Advisory Board at which board member Dennis Damon—who had been chairman of the legislature’s Transportation Committee when Van Note testified in 2006—suggested that reviving the 50/50 debate could turn public sentiment against ferry funding from the state.

“If you were to go there,” Van Note said, paraphrasing Damon, “there could be some unintended consequences.” 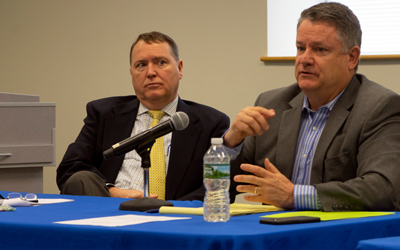 The April 24 hearing, held at Belfast’s Hutchinson Center, was part of the process for DOT to adopt another fare rate plan. The plan adopted last spring eliminated the discount for tickets purchased at island terminals, and hit Islesboro especially hard, raising the ratefrom $13.75 for a ticket purchased on-island for a car and driver to $30 regardless of where purchased.

The state hadn’t held a hearing on the plan it ultimately adopted, so a court sided with Islesboro in ordering that the rulemaking process be begun again.

The proposal now under consideration would push the fare for a car and driver to $35 and an adult walk-on passenger to $13 from the current $11. The rates would apply to passage to and from all six islands.

Van Note has said the proposal is a starting place for the latest fare process, and may change. Final adoption is expected in September.

Van Note opened the hearing by acknowledging the disruption the ferry rate changes have caused, and that ridership has dropped—13 percent for passengers, and 20 percent for vehicles. Ridership had especially dropped on the Islesboro run, he said.

The commissioner pledged to make data available and to modernize ticket sales, but cautioned that “There are a lot of definitions of fairness,” and that “not everyone’s going to be happy” with the final plan.

His goal is to review rates every four years after they are set through the current process.

The hearing saw a contingent from Islesboro speak in opposition to the new rates.

“We cannot attract teachers. We cannot retain teachers,” said Kelly, vice chairman of the school board, because of the higher rates. The school has lost six students since the rate hike of last spring.

Doug Welldon said higher rates have meant elderly people are clustering health care trips to the mainland, thereby adding stress to their lives, and even cutting back on visits to practitioners.

“The Maine State Ferry Service should be our Walmart, not our Tiffany’s,” he said.

Phil Seymour, a member of Islesboro’s select board, argued that the flat fare for all six islands is not working, and suggested the service let islands set their own rates.

Betty Johnson, a Waldo County commissioner, expressed concern for the social isolation of elderly islanders because of the rate increase.

Jon Emerson of North Haven cited the old fable that begins, “For want of a nail, a shoe was lost,” which traces the course of a small failure—the nail in a horse’s shoe—to the loss of a kingdom, and argued that higher ferry rates could spell the end of fragile Maine island communities. 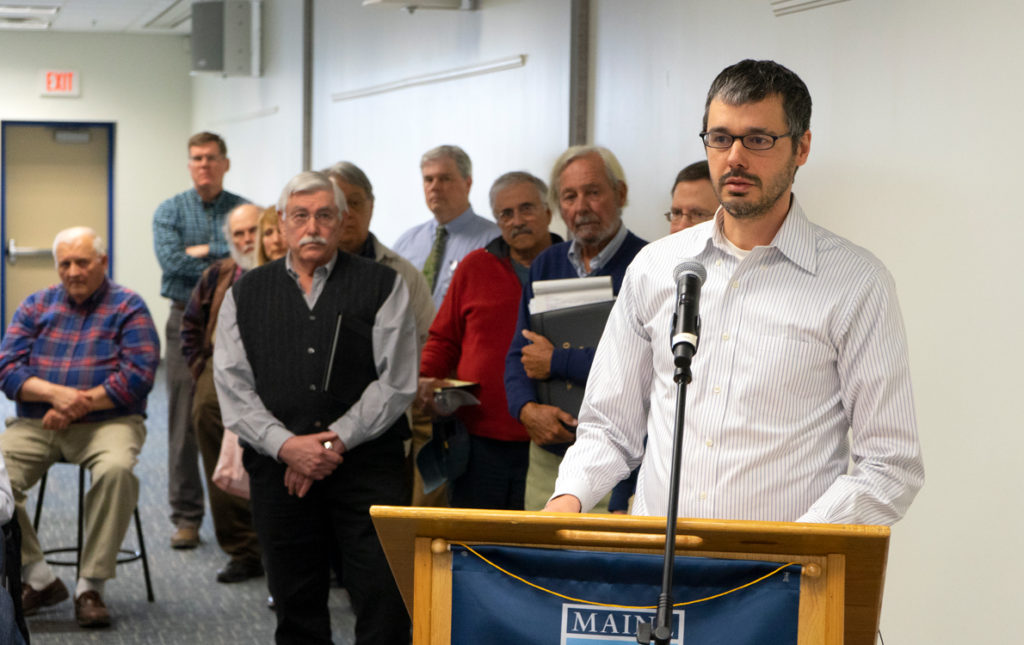