The coast of Maine and neighboring Maritime Canada are extraordinary in many ways, but there is one way in which we are truly unique on the planet—the height of our tides.

What are tides? Scientists define tides as the back and forth movement of water on specific, predictable time periods, the most noticeable of which are 12.4 hours and 24.8 hours. The tides also vary on longer time periods —monthly, annually and over multiple years.

Along the Maine coast, we experience two strong tidal cycles a day resulting in two low tides and two high tides, each a bit more than six hours apart. Along other coasts the tides can be wildly different.

In Alaska, each day brings a “big tide” and a “little tide,” with one high tide higher than the other. In Honolulu, the little tide is so small that people experience one noticeable high tide per day, rather than two. Along the Gulf of Mexico, the local dynamics result in almost no tides at all.

Why do tides happen? Tides are due to the gravitational force between the earth and the moon, the earth and the sun, the rotation of the earth, and the fact that the oceans respond differently to gravity than does the solid earth. In the simplest terms, gravitational dynamics between the earth, moon and sun cause ocean water to lay closer to the earth in some locations, and bulge outward on the parts of the earth that are both closest and farthest away from both the moon and the sun.

As the earth rotates around its axis each day, we rotate through the two moon bulges and the two sun bulges. The daily rotation of the earth through the bulges of ocean water results in the semi-diurnal (approximately every 12.4 hour) component of the tides. Because the moon and sun are not usually aligned with the equator, one of the bulges we rotate through at any given latitude is larger than the other, resulting in the daily, or diurnal component of the tides.

Why is our strongest tidal harmonic 12.4 hours and not 12 hours? To understand why this happens, picture the earth spinning around its axis, starting out from a point when you are looking directly up at the moon. By the time the earth has rotated through a full day, the moon has moved as well, so that in order to get back to the same position relative to the moon, you have to go through more than one full rotation (as the moon slowly makes its way around the earth, on its own 28-day elliptical path), so a “tidal day” is actually 24.8 hours, rather than 24 hours.

Astute observers of the local tide tables will notice that this explanation, while helpful, doesn’t actually accurately explain the precise time difference between high tide today and high tide tomorrow, which can vary from 40 minutes to 60 minutes day to day. This is due to the combination of multiple harmonics, which average out to the 12.4, 24.8 tidal day periodicity.

And what causes tides to be so different in different places? If there were no land and only ocean, each point on earth would experience two tides each day due to the moon, and two due to the sun, as the solid earth rotated below the bulges. The moon bulge would be about half a meter, and the sun bulge would be half as high. The shapes of the continents, and the ocean basins, confuse the pattern substantially, resulting in the different tidal patterns in each ocean basin.

In the late 1800s with the advent of accurate tidal records, scientists realized that ocean basins interact with the tidal “bulges” in a fascinating way, and that the tide of water piling up along coastlines can be modeled as a wave thousands of miles long that propagates around the oceans counterclockwise in the northern hemisphere and clockwise in the southern hemisphere.

In the North Atlantic, the “wave” of high tide starting in Europe passes north and west past Iceland, then Greenland, then Newfoundland, before reaching the northeast U.S. The same is true of low tide. Within the Gulf of Maine, our tides also come from the east—low tide in Cutler is 13 minutes before low tide in Monhegan, which is followed by low tide in York 16 minutes later.

Oceanographers, ship captains and tidal energy companies are interested in tides not only for the up and down, but also for the back and forth. Tidal currents are termed flood and ebb currents, as it rushes in and back out. These currents are typically just over one mph in most of the world, but can be up to ten times that within enclosed areas. To Maine’s east, 100 billion metric tons of water flows in and out of the Bay of Fundy every 12 hours, creating 5-10 knot currents and giant whirlpools that are a serious concern for mariners and an attraction for tidal energy companies like Maine’s Ocean Renewable Power Company. The extraordinary tides in the Bay of Fundy are due to both the funneling of water as it moves from the wider Gulf of Maine into the bay and surrounding continental shelf, which is a near-harmonic with the quarter-length of the tidal wave itself, leading to a dramatically amplified reaction to the tidal wave.

Tides, even in their most extreme form, are so predictable that their study has been a relatively inactive sub-field within oceanography for decades, but that is changing. As sea level rise becomes inevitable, the “shape” of ocean and near-shore basins, bays and channels will also be changing, which will lead to changes in the tides. This is especially true in basins like the Gulf of Maine and Bay of Fundy where today’s basin shape triggers a tidal harmonic, and our tides could become larger or smaller along this coast. 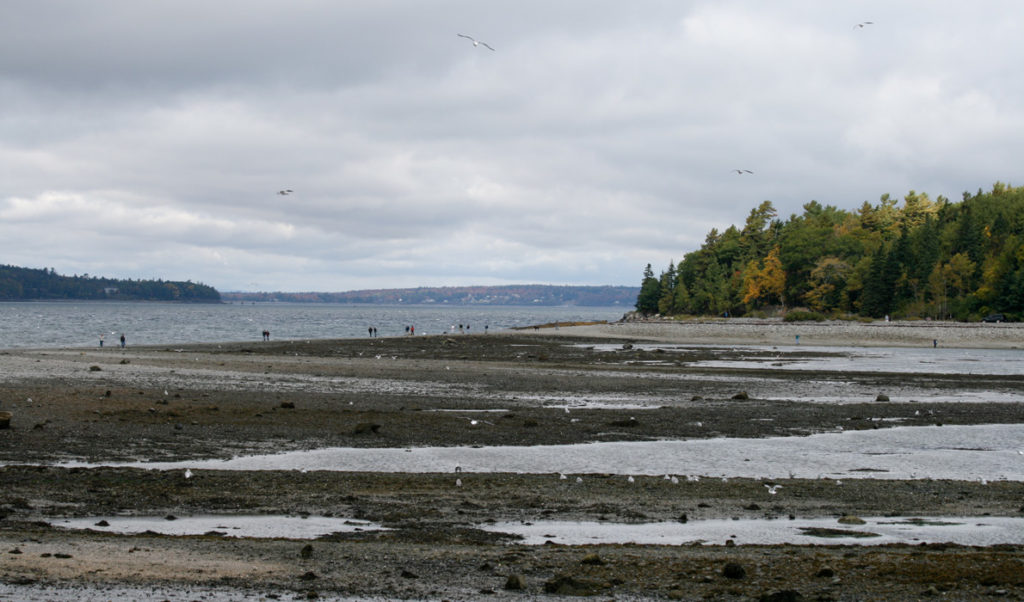