The cruise ship business must have been hit by the Great Recession, as were other sectors of the tourism economy. So the news, reported by the Mount Desert Islander, that the schedule for cruise ship visits to Bar Harbor for this spring, summer and fall shows “the town on track to set a new record … with 140 scheduled port calls,” is an economic indicator of sorts.

It’s also good news for Maine tourism, because not only will the passengers wandering the streets of Bar Harbor spend money there, but the willingness of out-of-staters to commit to cruises that call at Maine ports probably means other types of visitors are on their way in greater numbers.

Paturel International hoped to process 1.5 million pounds of lobster there, but now it is likely to be processed in Massachusetts. The plant manager blamed changes in Canada’s rules for foreign workers.

The company grew its employees from 40 in 2000 to about 240 last summer, the paper reports. But that growth would not have been possible without foreign workers. The business has 62 temporary employees from the Philippines and another 30-40 Filipinos have qualified for Canadian residency. “Over 100 Filipinos are now living in the area, with about 80 on the island,” the story notes.

Also from the Eastport area, via The Quoddy Tides: the reconstruction of the town breakwater, a portion of which collapsed late last year, is expected to get going in earnest in June.

CPM Construction of Freeport was awarded the $14.9 million contract. The company is seeking local workers with experience in carpentry and related trades.

Another town, another bit of working waterfront infrastructure: the Island Ad-Vantages reports that Stonington landed a $300,000 Community Development Block grant to renovate and expand its Hagen Dock, one of the port’s landing areas. The work is expected to cost $1 million in all.

“The dock has been plagued with problems in recent years, including sink holes that continue to open on the surface,” the paper reports.

An opinion piece in The Fishermen’s Voice lauded the Legislature’s recent efforts to monitor and reverse the effects of ocean acidification, but argued that it is just as important to work to protect eelgrass.

“Eelgrass can offset increasing C02 levels from the atmosphere and absorb excess nutrients from polluted runoff, both of which can cause the acidity of the ocean to increase,” the op-ed asserted. “Why not protect it?”

Eelgrass populations are declining along the entire Maine coast, the column noted.

Sometimes, success brings scrutiny. That may be what happened in Belfast, where The Republican Journal reports that the city council is dealing with a federal concern about moorings in what is known as the Federal Navigation Project, or FNP, which is that area of the harbor which is dredged by the U.S. Army Corps of Engineers. The 100 or so moorings in the outer harbor area cannot be leased for profit, according to federal rules that apply to those areas maintained by the Corps, the paper reports.

“For years, those rules were loosely enforced,” the story notes, but with the arrival of the yacht service and construction firm Front Street Shipyard in 2012, demand for moorings grew. Fifteen moorings in the FNP are owned by Front Street and leased, as are several by Belmont Boat Works.

The moorings were supposed to have been moved last summer. The council agreed to get the work done by the end of this year.

More Belfast news: Penobscot McCrum, a potato processing company operating on the waterfront, was fined $15,000 by the Department of Environmental Protection for releasing ammonia in the harbor.

A year ago, Jordan Bailey, a reporter for The Republican Journal took water samples around the bay and found high pH levels around the plant. DEP investigated and confirmed the high levels; the company’s license allowed pH in the 6 to 8.5 range, and a year ago, it was recorded at 10.4 (pure ammonia has a pH value of 11.5).

The company blamed the release on a malfunctioning wastewater treatment plant.

The Portland-to-Nova-Scotia ferry link goes back online June 1, after a less-than-stellar first season. The Nova Star, which travels to Yarmouth, Nova Scotia, is expected to arrive in Portland on May 23 from its winter berth in Charleston, S. C.

A bit of history from the Lincoln County News has us back on edge about the weather. On June 7, 1923, a column recounts, the Damariscotta area was hit with—as it was dubbed in a headline back then—”Worst tempest in half-century.” The heavy weather included “rain and hail, thunder and lightning, violent winds… buildings are unroofed, chimneys blown down, trees uprooted.” 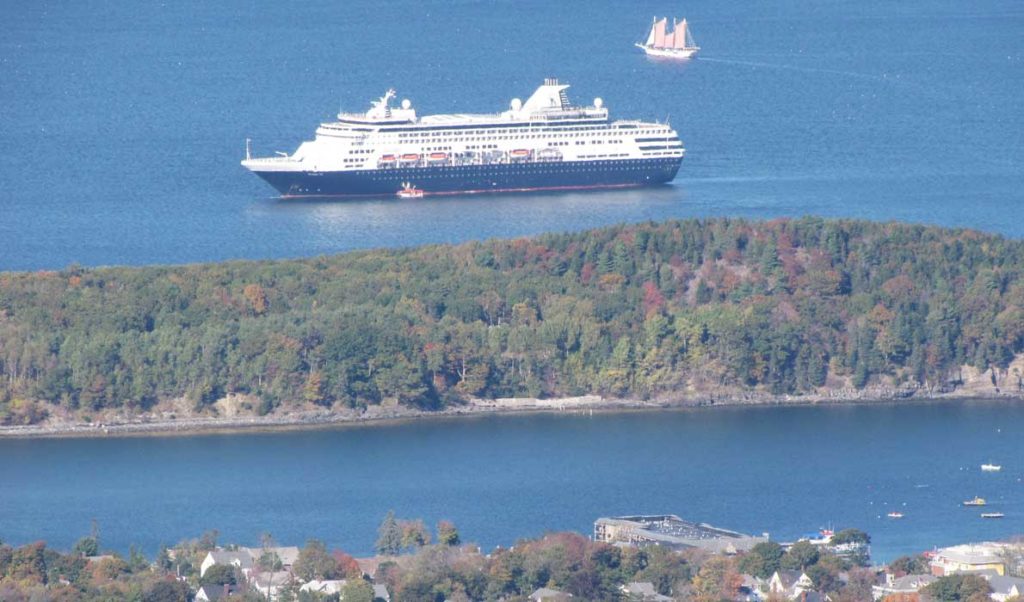 A cruise ship as seen from Cadillac Mountain.