In a corner of a windowless brick building on the Penobscot Marine Museum’s Searsport campus, centuries are colliding.

It’s where Kevin Johnson, the museum’s photo archivist, works to ensure that images made in the early 20th century right up through the 1980s are turned into digital files, catalogued, and made available to the public.

As precise as the digitizing process is, there is a companion part of the archivist’s work which often is mercurial, and sometimes generates conflict. As Johnson explains, carrying the ball across the goal line means discovering the story behind the picture: What town? Whose boat? What year? What happened?

“Photos speak to human beings,” he says, “much more than words. How many words does it take to describe something?” he asks, compared to the black-and-white evidence of a photograph. 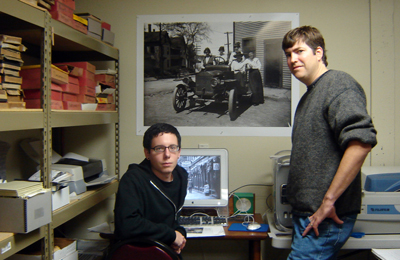 Johnson, 51, knows first-hand the power of the photograph to elicit those stories. He does about 15 “road shows” around the state each year, for which he gathers vintage images from the town he’s visiting—Stonington, Machias, Kennebunkport, Portland—and projects them to a roomful of locals, many of whom bring information about the scenes shown.

After giving a brief talk about the photos, he turns the microphone over to those attending, and the stories begin to flow. It’s not uncommon for people to sharply disagree about what is being shown, though, which speaks to the fluidity of history: Wasn’t that store built after the fire? Or was the old one renovated?

The story of how Johnson came to Maine, and how he landed at the museum, has its own drama. After college in Philadelphia, the New Jersey native took a job as a paralegal, helping research such cases as a claim against a large corporation for causing carpal tunnel syndrome.

“That was fun,” he recalled, as words like “ergonomic” entered the popular lexicon through the dawn of the desktop computer days. Fun, but not feeding his passion, which was photography. So after 14 years in the legal world in Philly—which paid well enough for Johnson to be able to build his own home dark room—he came to Maine in 2003 to study at the Maine Photographic Workshops in Rockport, completing a one-year professional certificate program in traditional photography.

Johnson stayed on a second year as a teaching assistant, and began working with the school’s librarian on the collection of glass plate negatives it had acquired.

POSTCARDS FROM THE PAST

The Eastern Illustrating & Publishing Company began in Belfast in 1909, cashing in on the era’s booming popularity of postcards. Company photographers, using large format glass-plate negatives, shot mostly village and rural scenes throughout New England and New York. The plan was to continue to California, and the business remained active through the 1940s, but the effort had waned and never realized its national goal. 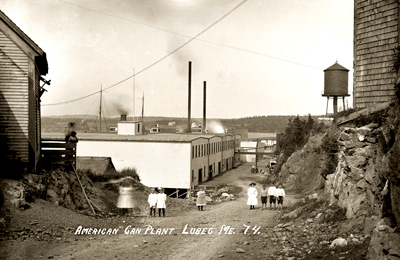 The plates—which, even today, produce high-quality prints—made the rounds, including spending 20 years on the vacant third floor of a Belfast office building. Plans to use them for calendars weren’t lucrative, and finally, through a grant, the negatives found a home at Maine Photographic Workshops, which would preserve and convert them to digital files.

Johnson became interested in the work, and when the librarian left her position, he took over. In those days, it was slow going, with a scanner taking about a half hour per image; daunting, given that there were 35,000 negatives.

Then disaster struck. The school had financial troubles, and on Feb. 4, 2007, a pipe froze and burst in the school’s building in Rockport, flooding the negatives, which were stored in the basement.

Johnson sprang into action, calling friends, and spent six hours carrying the bulky, heavy plates to an upper floor. He contacted experts at the Rochester Institute of Technology and Kodak for advice, and learned that negatives could not be stacked on top of each other. So it was off to Home Depot, where he bought out the stock of wire bathroom racks.

It took six weeks for them to dry.

Later in 2007, the owner of the school agreed to donate the negatives to the Penobscot Marine Museum, with one condition—that Johnson be hired to care for the collection. The Eastern Illustrating images eventually grew from 35,000 to 50,000, as private collectors sold or donated them to the museum. 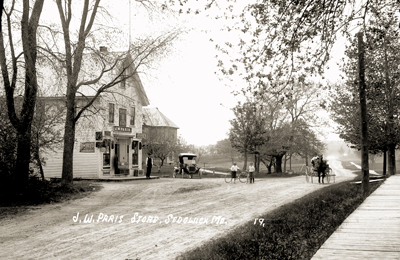 But it already had been collecting photographs. One of the museum’s founders, Joanna Colcord, who hailed from a prominent sea captain’s family, donated her collection before her death in 1960. So did Carroll Thayer Berry, in 1977.

The museum’s collections now include late 20thcentury photographs, from marine photographers like Red Boutilier, the archives of National Fishermanmagazine and the Maine Sardine Council, to, most recently, the late Peggy McKenna, who worked as a photojournalist in Belfast from the late 1980s through the end of the century, and whose archive numbers close to 200,000, and a dozen others from different eras.

The mission, Johnson explains, is to make the photos available to the public through an online data base, which was launched in 2010, and through prints, which can be purchased from the museum.

“What good is stuff that’s locked away?” he asks.

Another recent coup, which Johnson and the museum brought to Maine from a warehouse in New Jersey, are more than 50,000 negatives made by noted photojournalist Kosti Ruohomaa. Philanthropist Linda Bean and her sister Diana are helping fund the work, he said.

“She is one of the biggest champions of the history of Maine,” Johnson said of the L.L. Bean heir.

But before the photos can be shared, they must be scanned and converted to digital files. Johnson is joined by fellow photo curator Matt Wheeler, and more than 20 people volunteer at the museum, helping with the work.

“I have a great group,” he says of the volunteers. 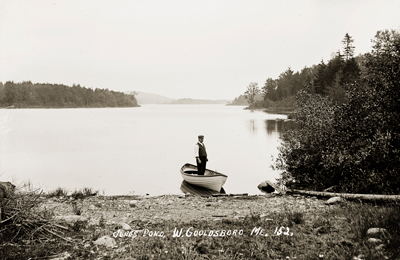 The data base, which now includes 130,000 images, will be updated to allow viewers to add feedback.

In addition to his community visits and slide shows, Johnson joined with historian Earle Shettleworth and W.B. Bunting on Maine on Glass: The Early Twentieth Century in Glass Plate Photography (published in 2016), and is working with local elementary school students on a “then and now” photography and oral history project which has the students interviewing residents of a local nursing home.

Johnson will be one of the featured speakers in the Island Institute’s Summer Lecture Series in Rockland on July 3. See PenobscotMarineMuseum.org to review the collections, and IslandInstitute.org for information about the lecture series.