Shellfish harvesting areas in the St. George River, which runs from Waldo County to Knox County, were closed in early September in response to a sewage leak.

The Thomaston Pollution Control Department worked to identify the source of the leak after it was reported by a local resident. The wastewater treatment plant was investigated and deemed safe; officials then turned their focus to inactive sewer lines that remain in place and act as stormwater drains as a possible source of E. coli bacteria. Theories for why the leak is occurring now include dry conditions over the summer followed by heavy rains, as well as possible construction activity, which may have affected the drainage system beneath the town.

Learn about the history of Birch Island in Casco Bay as part of Harpswell Heritage Land Trust’s Fall Short Course.

Local historian Dick Snow will lead a classroom presentation on Oct. 18 and field visit on Oct. 21 to the Helen and Walter Norton Preserve on the northeast corner of Birch Island to see old foundations and other remains of past human activity on the island. Space is limited and there is a registration fee.

On 5.4 acres on the east side of Saco Island where a previous development scheme failed, J&B Partners LLC/Saulnier Development plan a mix of uses including a “luxury” hotel, 60-unit condominium building, 40-unit condominium building, waterfront walkway and open spaces, boat ramp, restaurant, and parking for approximately 200 vehicles. Construction would begin next summer if all the permits are obtained.

Offshore in Saco Bay in waters influenced by the Saco River, the University of New England plans to build a boat ramp on Ram Island, which was donated to the university by resident Arthur Girard in 2014. According to UNE, the island will serve as a research site for the National Science Foundation-funded Undergraduate Saco River Biodiversity Observatory. Students and faculty will conduct coastal zone investigations of climate change, marine geology, invasive species, marine mammal ecology, and interactions with fisheries and marine aquaculture.

In August, the National Marine Fisheries Service released maps of critical habitat for the Atlantic sturgeon, which is considered threatened in the Gulf of Maine and endangered in the middle and south Atlantic Ocean. The Penobscot, Kennebec, Androscoggin, and Kennebec rivers are mapped as habitat critical to survival of the species.

Sturgeon populations declined because of fishing for the caviar trade in the 20th century. They have not recovered because some continue to be caught accidentally in other fisheries, and their habitat is degraded from pollution, development, and dams.

The critical habitat designation covers areas that are important spawning and nursery habitat: hard bottom substrate such as rock, cobble, gravel, and bedrock in freshwater spawning areas for settlement of fertilized eggs, refuge, growth, and development of early life stages, as well as downstream freshwater and estuarine segments for juveniles.

Adults need unimpeded access to and from spawning locations (typically at the first rapids or falls) and clean water with abundant food sources in the estuary.

Atlantic sturgeon are the largest of Maine’s native sea-run fishes. They live a long time (up to 60 years!) and mature late. They are also among the oldest living fishes on earth. http://www.fisheries.noaa.gov/pr/species/fish/atlantic-sturgeon.html

The urchin season has opened for those who fish with rakes, traps, or by hand via SCUBA diving. Dragging begins in December in Zone 1 (west of Penobscot Bay) and October for Zone 2 (Penobscot Bay and east). This year, the Maine Department of Marine Resources has designated the Blue Hill Bay-Upper Jericho Bay area as a limited access area for sea urchin research. Fishermen are required to have a tracking system on board their vessel when fishing for urchins in this area.

According to Margaret Hunter of DMR, the new approach comes because despite management changes in the last decade, sea urchin populations are not recovering.

“Some places have improved while others became depleted, but overall there hasn’t been much change,” she said. “We’ve also noted that roe quality has declined, in both zones. Further cuts to season length or daily catch limits would probably erode the state’s remaining processing infrastructure, so it’s time to find another way to try to rebuild the abundance of good-quality urchins.”

Heeding the recommendations of fishermen who have observed that areas closed to scalloping seemed to have improved urchin abundances, and following other states that have implemented rotational closures for urchins and Maine’s own success with scallop closures, the department decided to run a “small but intense” monitoring and closure experiment to understand local ecosystem dynamics.

Blue Hill Bay and Upper Jericho Bay areas have both scallop and urchin fishing, consistently low urchin abundance, and a moderate level of harvesting. The area is also accessible and relatively easy to enforce. 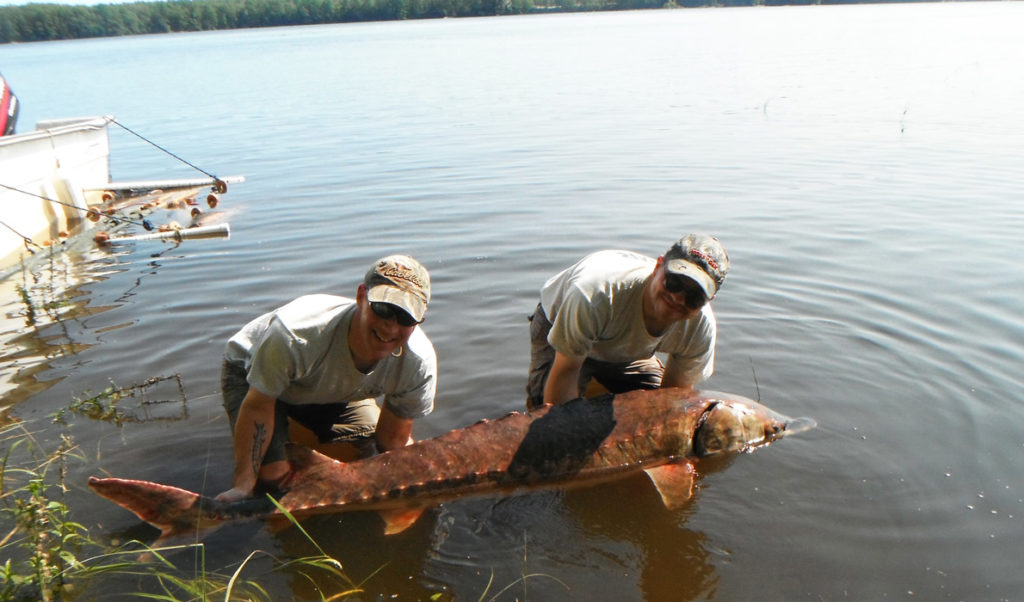 A sturgeon caught in Merrymeeting Bay.