Red tide of a different shade

At the end of September, an unprecendented bloom of the phytoplankton karenia mikimotoi extended from Cape Elizabeth to the New Meadows River. Maine Department of Marine Resources (DMR) staff and local observers noted brownish water and the odor of suffocating sea life, which by mid-October had decreased or dissipated completely.

Unlike other phytoplankton, such as Alexandrium, this species is not toxic to humans, but it can produce compounds that can potentially impact fish and shellfish. The primary concern with karenia blooms in Maine is low dissolved oxygen, which especially occur at night or in the early morning when the dinoflagellates are consuming oxygen in deeper waters after being at the surface soaking up sunlight all day. Large patches of dead soft-shelled clams in Maquoit Bay in Brunswick were likely due to low-oxygen events. DMR advised fishermen and mariners to remain alert for signs of low oxygen.

Note that this bloom was not the cause of dead surf clams washed up on Old Orchard Beach in early October. According to Kohl Kanwit of the DMR, “Surf clams routinely die in high surf events, like passing hurricanes offshore.” DMR did sample clams from the area and concluded the deaths were surf related.

With support from the Gulf of Maine Research Institute, high school students in Calais High School’s Cobscook Experiential Program will collect water quality data (pH, water temperature, conductivity, dissolved oxygen, turbidity) in the East Machias and Orange River watersheds this school year. The students will work with the Downeast Salmon Federation, which has an Atlantic salmon hatchery near the mouth of the East Machias River.

The Cobscook Experiential Learning Program, based at the Cobscook Community Learning Center in Trescott, provides academic credit to high school students who participate in local service projects, learning about issues directly from their fellow community members.

Reports from across the Penobscot watershed indicate that the out-migration of juvenile alewives from freshwater lakes has been spread out over a period of months. Fish adjusted to the dry season by accumulating at above-lake outlets and waiting for rains to increase flows enough for the young-of-the-year fish to exit and migrate to the estuary and bay.

Keeping sewage out of the Kennebec

The Greater Augusta Utility District is considering construction of an above-ground storage tank to hold sewage overflow during storms to keep it from going into the Kennebec River.

Augusta is one of 31 Maine communities with “combined sewer overflows.” When the sewers that carry wastewater to treatment plants are overwhelmed by heavy rainfall, some of the waste diverts to pipes that bypass treatment facilities and discharge directly into waterways.

State and local governments have worked hard over the last few decades to eliminate these discharge points, but 142 remain (18 in the Augusta district). In 2016, more than 14 million gallons of untreated wastewater flowed into the Kennebec River. Sewage pollution can close beaches and clam flats, deplete oxygen, and add nutrients.

Looking for toxic chemicals in the Bagaduce

In August, Carey Friedman, assistant professor of marine science at Maine Maritime Academy, was cruising the Bagaduce River to retrieve pieces of polyethylene plastic tied with metal wire to buoys stationed along the river, from off Dyce Head to Northern Bay. The material would pick up any persistent organic pollutants that might be present. Persistent organic pollutants are pervasive throughout oceans, and they are present in the Penobscot River and Bay. Friedman plans to analyze the plastic for polycyclic aromatic hydrocarbons (or PAHs), which are cancer-causing toxins produced when organic material (such as firewood or brush) is combusted. PAHs can travel through the atmosphere and deposit into nearby water bodies. PAHs and other hydrophobic (relatively insoluble in water) chemicals tend to absorb into plastic, accumulating at concentrations 5-7 orders of magnitude greater than their concentration in water.

Another group of pollutants, polybrominated diphenyl ether (PBDEs) used as flame retardants in a wide variety of products, can be toxic to people and wildlife and have been detected in fish in Penobscot Bay. Most of these pollutants enter rivers and coastal waters via wastewater treatment plants.

Friedman and MMA undergraduate Huxley Conner are also collecting microplastic particles from the bay to analyze for PBDEs. They are testing the hypothesis that PBDEs are delivered to the bay absorbed in microplastic released from wastewater treatment plants. Friedman’s research examines the transport and fate of organic contaminants, and she has been developing partnerships with tribal communities, the U.S. Environmental Protection Agency, and the Maine Department of Environmental Protection. 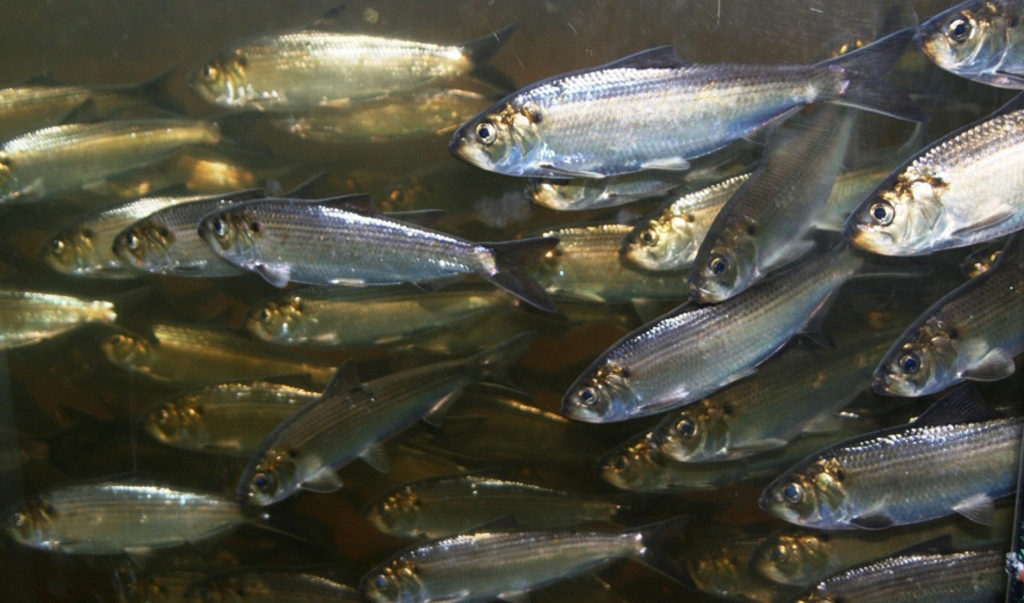