A northeasterly storm in early March brought another spate of flooding and damaging waves to Maine bays and estuaries. For three days, heavy winds pushed lunar high tides into roadways and parking lots.

Along Saco Bay, water was knee-deep in Camp Ellis, a location known to be vulnerable to flooding and erosion. Small craft washed ashore at Pine Point. Waves surged into York Beach neighborhoods and tossed rocks over the seawall in Acadia National Park. Many scenes from the Jan. 4 storm were repeated: Route 1 through Lincolnville flooded again, as did the Deer Isle causeway and Commercial Street and Bayside in Portland.

What can be expected in the future? Several mapping tools are available for viewing areas vulnerable to sea-level rise. The most accurate to date is from the Maine Geological Survey, which shows conditions with a sea level rise of one to six feet. With a base map of LIDAR satellite measurements of topography and elevation that have an error of several inches, Maine Geological Survey projections start at the local highest annual tide, which can be several feet higher than the annual average high tide.

To better help property owners and communities planning for future sea levels, MGS plans to add sea-level rise scenarios of nine and 11 feet to approximate projections in the latest U.S. National Climate Assessment. Resources for coastal property owners can be found at http://www.seagrant.umaine.edu/coastal-hazards-guide.

Rainbow smelt and community fishing heritage will be celebrated at the annual Downeast Smelt Fry on the Pleasant River in Columbia Falls, 11 a.m.-4 p.m. on April 21, which is World Fish Migration Day, a global celebration of sea-run fish. Additional events are planned by the Royal River Alliance, Monkitree Art Gallery in Gardiner, Leonard’s Mills at Blackman Stream in Bradley, the Maine Discovery Museum in Bangor, and Cooper’s Mills in Whitefield. Visit worldfishmigrationday.com to find these events and more.

Frenchman Bay Conservancy has launched a capital campaign to revitalize the Tidal Falls Preserve where Taunton Bay meets Frenchman Bay. The Conservancy hopes to raise $2.25 million to build miles of public hiking trails, restore the shoreline, remove dilapidated buildings, and open up the view. A new education center will provide opportunities to engage people of all ages in outdoor activities. http://frenchmanbay.org/revitalize-tidal-falls/

By preventing water flow, the road caused the marsh upstream to flood for extended periods of time and the water to be fresher and warmer, potentially affecting the growth of fish, according to Project Coordinator Ruth Indrick. The freshwater also created prime conditions for invasive plants like phragmites to take over.

The land trust will be monitoring the Little River salt marsh for the next five years to document how it changes over time, measuring water level and temperature, plant types, and plant growth. The project was supported by U.S. Fish and Wildlife Service, Stantec Consulting, and a grant from the Maine Natural Resource Conservation Program.

Gayle Zydlewski, an associate professor in the University of Maine School of Marine Sciences, has been named director of the Maine Sea Grant College Program, effective July 1.

Zydlewski, who has a Ph.D. in oceanography from UMaine, has more than 20 years of experience as a researcher and faculty member at UMaine and Washington State University. She also served as a supervisory fishery biologist at the U.S. Fish and Wildlife Service in Longview, Wash. She is currently the graduate coordinator of the Marine Biology Program in the School of Marine Sciences.

Zydlewski’s research seeks to understand the impacts of environmental conditions on fish behavior and physiology, and their relationship with population dynamics. Her most recent research focuses on shortnose and Atlantic sturgeon in the Penobscot River and the broader Gulf of Maine, and the environmental effects of tidal power development in partnership with state and national natural resource regulators and marine renewable energy partners in the U.S. and Canada.

The University of Maine Sea Grant Program is a partnership between the National Oceanic and Atmospheric Administration and the state, and part of a network of 33 Sea Grant programs throughout the coastal and Great Lakes states. Sea Grant funds marine research, outreach, and education projects and programs statewide. In partnership with UMaine Cooperative Extension, Sea Grant supports a team of professionals based in coastal communities from Wells to Eastport. Learn more at seagrant.umaine.edu. 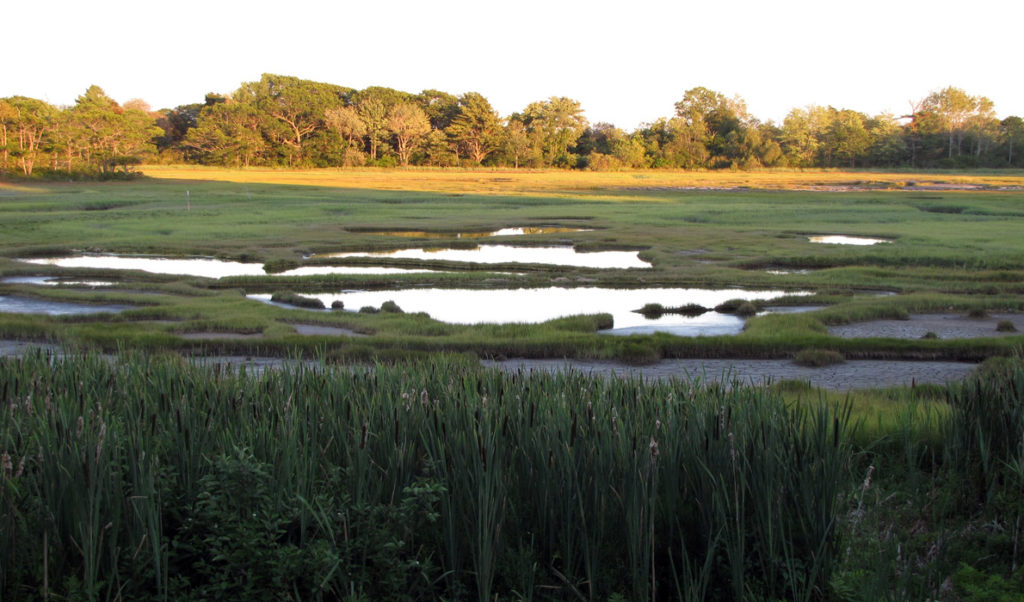 A salt marsh in Southern Maine.