The project is aided by Harold Burnham, an 11th-generation member of a historic Essex shipbuilding family, a 2012 National Heritage Fellow, and a master shipwright who continues to produce wooden vessels using traditional designs and techniques.

“She’s been referred to as the most historically significant ship, second only to the Constitution, because of her amazing history,” said Mary Anne McQuillan, secretary of the nonprofit Schooner Ernestina-Morrissey Association, which works with the Schooner Ernestina Commission and the Massachusetts Department of Conservation and Recreation. “Her story speaks to so many people.”

On a recent sunny morning, the 156-foot vessel, launched in 1894 and hailing from New Bedford, Mass., was pulled up from quiet Boothbay Harbor onto the yard’s railway car. Burnham, who has put a lifetime of research and practice into all the “historics” around wooden boat design, construction and restoration—not to mention cheerful use—wanted to talk about a lively present, not a static past.

“We’re dealing with things that were alive once,” he said about the process of wooden boatbuilding. “It moves, it shrinks and swells, and understanding all that is one of the things I think is coolest about shipbuilding.”

Ernestina symbolizes a key period in the Northeast’s symbiotic fishing and vessel-construction industries. According to the National Park Service’s Historic American Engineering Record, large schooners in the mid-1800s succeeded smaller colonial vessels that fished closer to home. Feeding the expansion of urban and inland markets, fishermen ranged further offshore on longer trips, requiring larger, faster boats. The schooner rig was popular because its sails could be handled by a small crew. Essex shipyards launched some 4,000 schooners, probably more than any other town in the world. Today, a handful remain. (By the 20th century, sail-only vessels faced competition from engine power.)

At the peak of this trend, George “Mel” McClain was at the peak of his design career. A native of Bremen Long Island, near Friendship, McClain had fished in Gloucester and understood the perils of the sea. He’s quoted: “The men who command and man these craft are my friends; many have been my shipmates in days gone by. Would I be liable to model for them vessels of unsafe design?” McClain designed the Effie M. Morrissey (later Ernestina-Morrissey), which was built by the James & Tarr shipyard. The Morrissey fished and carried cargo in the Northeast for 30 years, then turned to the exotic. In 1926, explorer Robert Bartlett bought the vessel for scientific expeditions to the Arctic, sailing within 578 miles of the North Pole, closer than any vessel before.

World War II brought naval service. Afterward, the renamed Ernestina carried immigrants and goods between the Cape Verde Islands, off Africa, and the U.S. until 1965—the last sailing ship in regular service to carry immigrants across the Atlantic. Ernestina remained among the islands until 1982, when it was presented to Massachusetts as a gift to the people of the United States. Sailing the Eastern Seaboard on public missions, Ernestina in the 1990s was designated a National Historic Landmark and became part of the New Bedford Whaling National Historical Park.

In 2005, substantial deterioration stopped Ernestina’s travels. It went to the Boothbay Harbor Shipyard in 2008 for repairs and replacement of the bow, foredeck and some exterior planking. Destined for the Massachusetts Maritime Academy as a training and public outreach vessel, $6 million was committed to complete the current restoration.

Ernestina “was patched together like an old pair of pants. Sometimes, they become more patch than pants,” said Burnham. “At a certain point, it becomes more practical and sensible to do a major restoration that, with respect for the past, meets the demands that will be placed on it in this modern era.”

Shipyard president Eric Graves and his crew, along with Burnham commuting weekly from Essex, will spend at least the next three years finishing hull and deck reconstruction from where the last phase left off.

“We have a good crew started and we’re hopefully hiring several more people as the project unfolds,” said Graves, who is working with local economic development agencies and outreach programs such as the Boothbay Sea and Science Center. “It’s a great job for the community, and we’re exposing this to the many people who visit Boothbay every year.”

The project incorporates the highest quality material available, said Graves. Specialty items include thousands of board feet of Danish Navy oak, planted over 100 years ago and selectively cut for special projects. Fastenings include traditional wooden treenails, pronounced “trunnels,” and bronze fasteners. Ultimately, the goal is to restore the original lines and, through various rearrangements, to make the interior structure accessible for future maintenance.

The folks working on this project are part of a specialized group.

“You don’t do this work because you want to get rich quick,” said Burnham. “You do it because you’re passionate about it. A project like this pulls a lot of great talent into this fantastic yard. We’re all looking forward to the end result being the best we all can make it.” 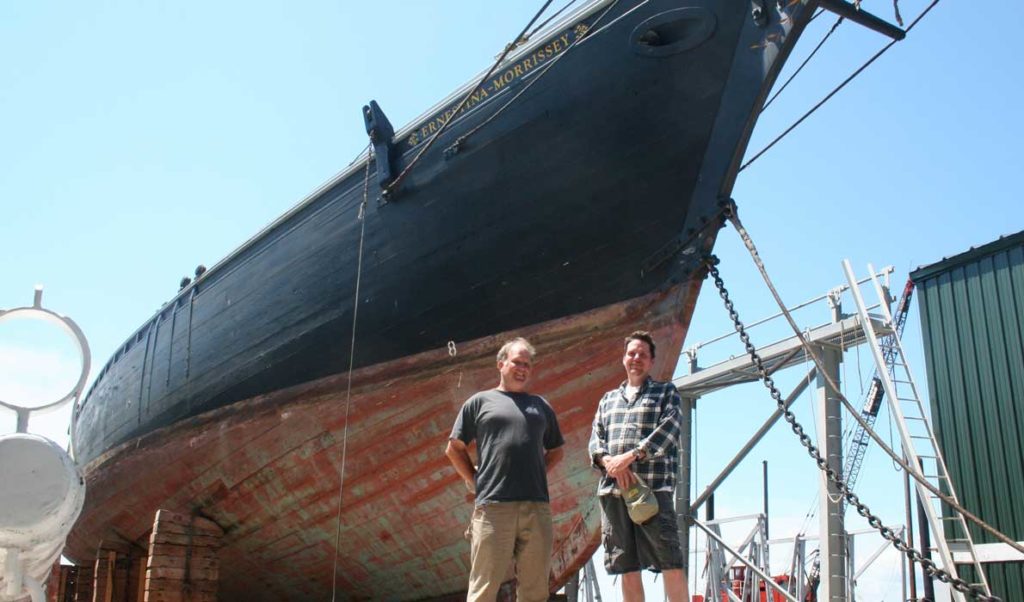