UNITY — Almost 70 organizations were represented at an environment-based career fair at Unity College on Feb. 10. Is that a sign of a rebounding economy?

Many of the organizations were recruiting for summer jobs, such as counselor positions at camps, or for limited duration internships. But for the young adults nearing the end of their days at the small, four-year private school, there were some promising signs.

And not all the students cruising through the aisles in the college gym were seniors; some were in their first years at the college, and very willing to take low-paying jobs that would give them valuable experience, and look good on a resume when the degree work is finished.

Unity College bills itself as America’s Environmental College, but that may not mean what you think. Some students have “Don’t like logging? Try using bark instead of toilet paper” bumper stickers on their trucks, along with a gun rack. Others are proud of their EarthFirst! membership.

Reeta Benedict, who works with the college’s career center, noted that the fair reflected that range of values, including representatives from Johnny’s Select Seeds and the Maine Warden Service, and lots in between the cultural poles represented by each.

Unity sees about 90 percent of its graduates get jobs or go onto graduate studies, she said.

First-year student Patricia Paskerta, who hails from Charlestown, N.H., admitted she has been perceived as embodying hippie values, maybe because of the nose ring she sports. But Paskerta is a conservation law enforcement major, and had just finished speaking with the representatives of the state’s warden service.

“My parents taught me shooting when I was 6 or 7,” she said, and she was an early hunter, too. Being an environmentalist means respecting the laws, she said.

“I’ve seen so many of my friends not following the laws,” Paskerta said, even going so far as to poach deer. “There’s only so many deer to go around, especially in New Hampshire. The preservation of wildlife is also about the environment.”

She realizes that both Maine and New Hampshire will have few openings for game warden positions, but she wants to be ready. “There’s a lot of people who want that job,” and rather than find out in her last year of school what experiences and education she needs to be competitive, she wants to know now. She even wants to be ready for the physical requirements.

Paskerta has been volunteering with Operation Game Thief in Maine, an organization that rewards those who tip-off authorities about poaching.

Elmer Deforge, a 23-year-old senior from Orange, Vt., also is majoring in conservation law enforcement. He is determined to be practical in his job search, at least right after graduation, interested in “anything to do with conservation and law enforcement. I’ll travel, I’ll get any job,” he said.

With law enforcement jobs more prevalent—the Maine State Police and state corrections department were represented at the fair—Deforge figures he could log a few years at such a job, then seek to add the conservation element in a subsequent job.

That travel may be required in the post-recession work place is echoed by Chris Jones, representing the Natural Resources Conservation Service, part of the U.S. Department of Agriculture, at the fair. The organization trains engineers, biologists and soil scientists to work with private landowners. There’s an opening in the USDA’s Presque Isle office, he said, and at others around the country.

The Massachusetts Audubon’s Wildwood summer camp, located in Ridge, N.H., was seeking counselors and staff. Welch Narron, the camp’s director, said it employs 40-50 each summer, most of them college students, and hosts about 120 campers, ages 9-14, for two-week sessions.

“We focus on connecting kids with outdoors,” he said.

Helping at the camp’s table at the fair was Rebecca Harrison, 19, of Freeport. After working as a counselor at the camp, she’s now a sophomore at Unity, majoring in outdoor education.

Jessica Anderson represented the Kieve Wavus camps of Nobleboro at the fair, seeking summer counselors for its boys and girls camps. The organization also is seeking applicants for its educator positions. The educators work in Kieve Wavus’ leadership program, and help middle school students learn communications skills, team-building and other life skills.

Anderson said the work is done in the spring and fall, but through a grant, the organization is able to pay the educators to work in area schools.

And for outdoors-loving students who want to have some fun while making a few bucks, Karen Francoeur of Castine Sea Kayak Adventures was recruiting guides, whom she will train to take guests out on the water. 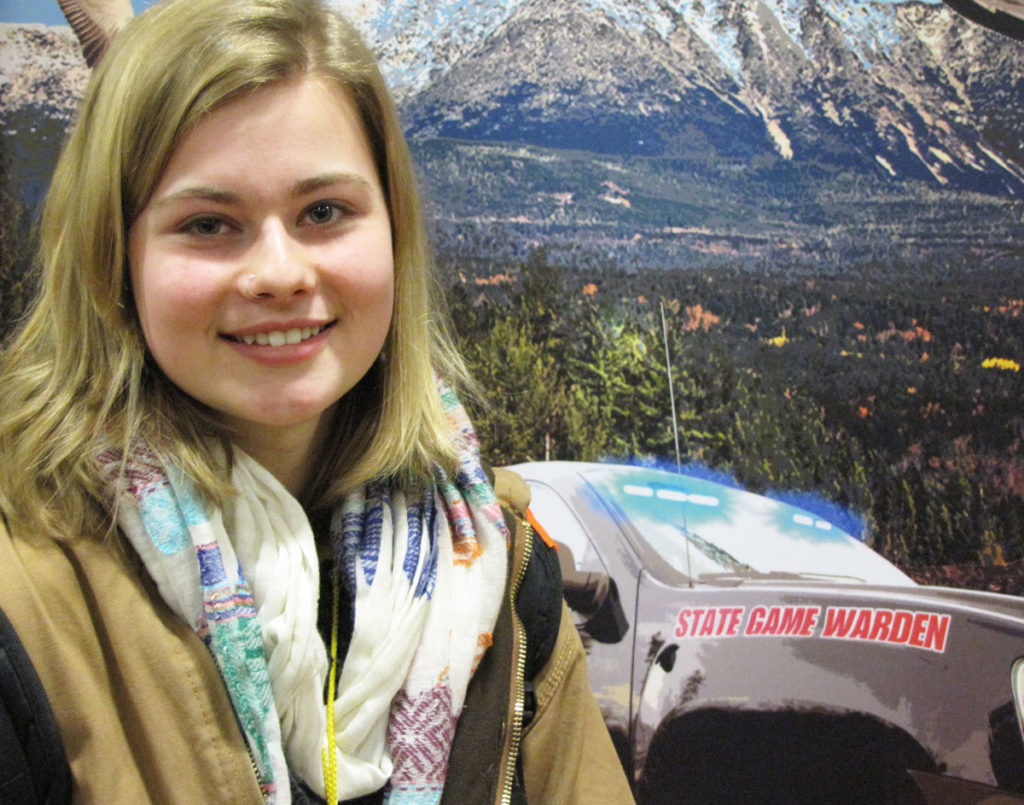