“It has been a rough winter,” she said, a deliberate understatement. Record-setting snowfall and the logistics of maintaining services only added to the responsibilities she has taken on since January.

Coming up through the ranks of city employees, Abbott now supervises her former coworkers.

“We all work well together,” she says of the 12 city employees and five city councilors, which include Mary Repole, council president, police Chief Franny LaCoute, and health center director Holly Gartmayer-DeYoung.

And why are women holding most of the top positions in the city?

“Women tend to be community oriented,” Abbott says, then adds, enthusiastically, “Let’s do it and why not!”

Abbott moved to Eastport in 2007, because she “fell in love with it” while on vacation. Little did she know she would end up buying and moving into the 1876 home of a distant relative. Previously, she served as a criminal case specialist for the state of Massachusetts.

Franny LaCoute has lived her entire life in Perry and Eastport. Known and respected as the owner of a centrally located variety store for over 20 years, she had to shift gears when a franchise store moved into town. Then her own personal health issues and family ties caused her to double down and reevaluate her career path. She decided that she wanted to be a game warden.

“I was second in my class in physical testing,” she said of her training at the Maine Criminal Justice Academy. As 52-year-old woman in a class dominated by 20-year-old men, her instructors called her a role model. After graduation she went to work for the Passamaquoddy Pleasant Point police force. In February, she became Eastport’s chief of police.

“I want people to feel comfortable reporting problems and know that someone is going to take them seriously,” says LaCoute. “We have to prevent deeds instead of dealing with them after they happen.”

She plans to work collaboratively with the neighboring forces at Pleasant Point and the county sheriff’s office.

LaCoute is tough and confident. She speaks of strengthening respect and trust in the police force.

“I want people to feel safe in their homes,” she asserts.

When the director’s position at Eastport’s health center became vacant in November 2010, Holly Gartmayer-DeYoung remembers being “humbled to be contacted about applying for the job.”

With a degree in nursing, public health and business administration, she had already worked with several medical programs and facilities since her move to Washington County in 1996.

“I could feel a palpable sense of community,” she said of her choice to make the county her new home.

For Gartmayer-DeYoung, health is linked to community and relationships. “We only have each other,” she says, and explains how she instituted a program that offers the opportunity for many to be heard about issues in the “neighborhood” of eastern Washington County.

Eastport Health Care provides a range of medical, dental and behavioral services at sites in Eastport, Calais and Machias. As its CEO, Gartmayer-DeYoung oversees a staff of 42. 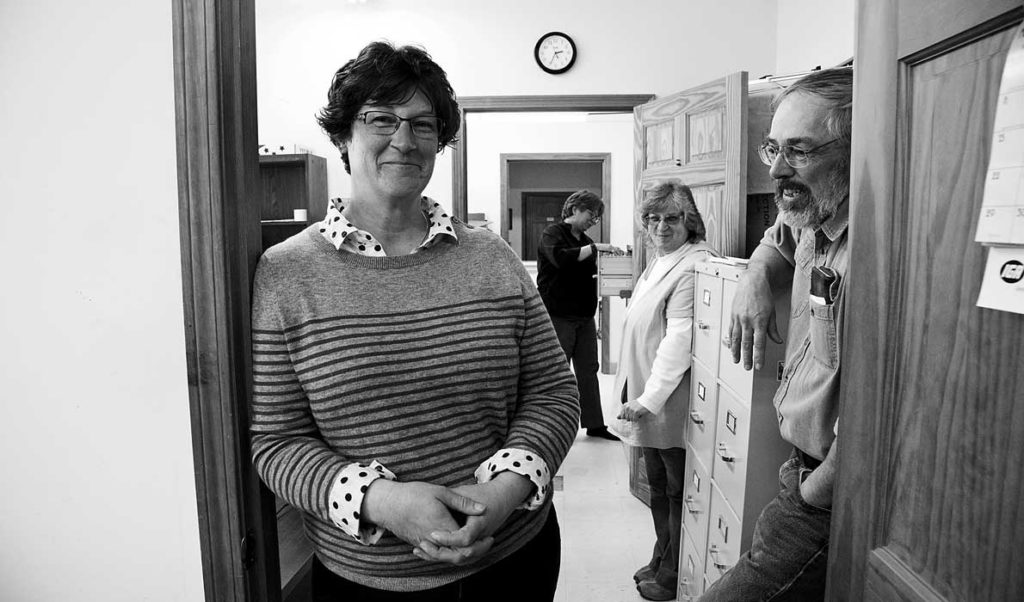