One of the lessons of the COVID-19 pandemic is that the fates of humans across the globe are inextricably linked. Fifty years ago, the idea our lives depended on linkages with the natural world was a central part of the message of the first Earth Day and is even more vitally important to recognize five decades later.

On the first Earth Day, April 22, 1970, I went to New York City. Going to a big, dirty city for the event was not necessarily an act of defiance, although defiance was everywhere in the air. I was a senior in college, about to graduate with a draft lottery number of 45, which meant I was near the head of the line for a 1-A ticket abroad at the invitation of the U.S. military.

The year before, 1969, the Cuyahoga River, which ran through Cleveland and was choked with oily waste, had caught on fire. The story and picture ran on the cover of Time magazine and captured the horrid and horrifying zeitgeist of that time. To most of us under 30, the military industrial complex seemed to have brought the country both war abroad and devastation at home.

All I remember of that first Earth Day was that New York’s Mayor Lindsay had closed off Lower Broadway as incredulous crowds ambled about, dumb-struck by the concept of a quiet pedestrian experience in the midst of noisiest city on Earth. I think I might even have heard birdsong.

I stood in front of Max’s Kansas City, an exotic demimonde bar and entertainment venue in Union Square, while my best friend from high school and I marveled at the city’s first natural gas-powered bus, which, we were told, would soon replace the city’s noxious diesel buses. That was a dream that would have to wait another half century.

I moved to Maine in 1972, attracted by the lure of the vast open spaces of the unorganized territories where Thoreau had wandered, and I found compatible neighbors in several quirky, small towns in remote Washington County. I lived in Cherryfield, Steuben, and Township 7, the southernmost unorganized township in Maine.

The big environmental issue at the time—before there was much of what would later be called “the environmental movement”—was whether to site an oil refinery in the deep-water port of Eastport. Everybody seemed to be for it—the governor, Maine’s entire Congressional delegation, and all of Eastport’s city councilors. Most of the rest of us seemed ready to sign up for cheap gasoline the project promised to bring to Maine. Even President Richard Nixon chipped in by declaring a free trade zone to lower the cost of foreign oil around any American community willing to host a refinery.

Despite the impressive degree of support for the refinery, the powerful and politically connected oil industry was beaten back by the relentless opposition of local fishermen and a few determined lawyers from Portland, led by one Horace “Hoddy” Hildreth, who would later become the long-time chairman of the Island Institute’s board of trustees. Maine, it seemed, did not want to become an energy colony for the rest of New England and the Northeast.

That was all before I landed on my first Maine island to collect baseline ecological data on a dozen uninhabited islands, all of which I slowly discovered had rich and complex histories, including off the Washington County coast, and where I learned the phrase “wilderness island” was nonsense. Over the course of the next three and a half decades, islands taught me almost everything I know about people and nature.

Fast forward a half-century, and we find ourselves again in the midst of an intense public battle over Maine’s role at the intersection of energy and the environment. This time the issue is whether Maine should approve an “energy corridor” with a high voltage electric transmission line linking Canadian hydropower to Boston, the hub of New England. Why should we give up a 53-mile-long corridor of wildlands in northwestern Maine so Boston can turn on its lights? Now as before, the governor is for the proposal, as are many of Maine’s political leaders.

Once again, the question for many Mainers is: Why we should we let ourselves become an energy colony for the rest of New England?

If only the question were that simple.

In the era of the inexorable, seemingly invisible, threat posed by climate change to all corners of Maine and the world, more and more of us now recognize the intricate linkages between energy and the environment. The choices we make about everything we do—from the cars we drive, to the food we eat, to the type of energy we depend upon—will affect the world in which we live and move and have our being, to use the ecclesiastical phrase.

On Lane’s Island Vinalhaven, the sea captain’s house, which has been a family retreat for almost half a century, sits on a knoll at least 30 feet above sea level. But most of “downstreet” Vinalhaven will flood as sea level rises. I look out at the Fox Islands Electric Coop’s three wind turbines that were sited on a 70-acre abandoned quarry over a decade ago with overwhelming approval of the ratepayers on both Vinalhaven and North Haven. What a great example of leadership these far-sighted island communities have provided!

Islanders know that the two biggest imports to their communities are food and energy. By providing virtually all the energy these two island communities use in a year from their local wind resource, they have bought themselves a more secure future.

When it comes to energy, the rest of New England is not an island. We are all part of the interconnected New England grid and the decisions we make in our energy choices in Maine cannot be separated from the energy requirements through the rest of the region.

Hydropower from Canada is not a perfect solution to fill the energy needs of New England until such time that grid-scale offshore wind development becomes a reality. There are no perfect solutions. Backyard and rooftop solar will play their parts for some homeowners. Terrestrial wind in Maine, which once appeared to be a promising part of New England’s energy mix, has met lots of intense local opposition.

On this Earth Day, I urge all of us—living within the island world of New England—but especially here in Maine—to learn more about our collective, interconnected energy future. As a region, we have taken strong stands against nuclear and coal. Many have voted against terrestrial wind. If we don’t want Canadian hydro to fill the gaps in supply during the next decade, we need an alternative solution that recognizes our interconnected regional future.

Philip Conkling is the founder of the Island Institute. He now operates Conkling Associates (www.conklingassociates.com). 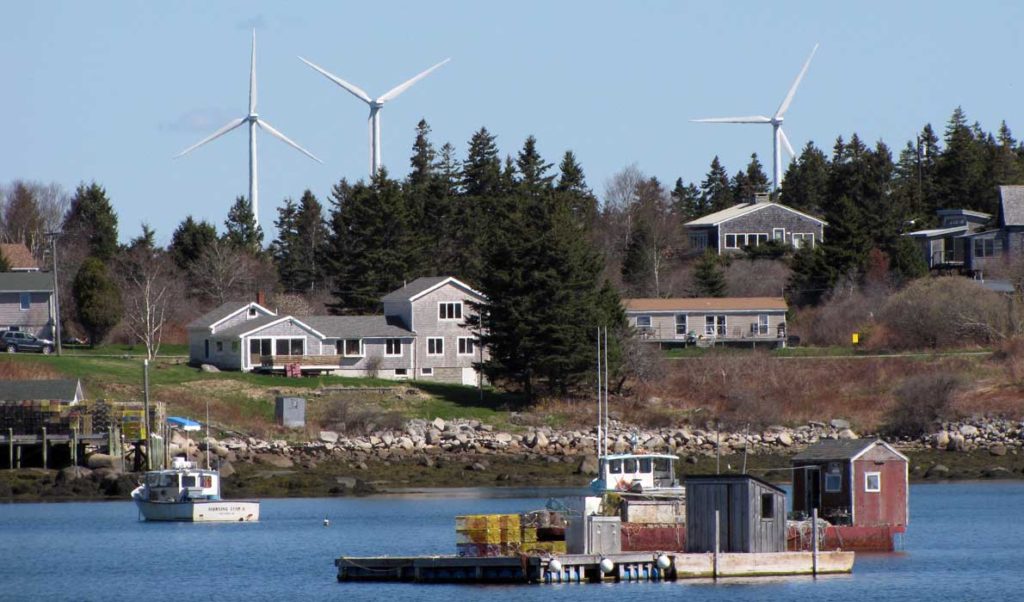