In my childhood Octobers, my dad and mom tossed my sister and me plus several bushel baskets into the back of the Studebaker station and we drove to an apple orchard that let its customers pick up apples—drops—that had fallen to the ground. It was a great outing, and the apples, having picked them ourselves, were cheaper than the ones all lined up in pecks and bushels on the orchard’s farm stand shelves.

What I mainly remember was that it was a little warm, usually sunny, that the leaves had usually turned color by then, and that I longed to pick an apple off a tree instead of off the ground. Those trees were standards—full sized—and most of the time I was too little to reach the apples still hanging, and anyway I was not a tree-climber.

I suppose that early training in frugally gathering up what might otherwise go to waste accounts for my present absorption with gathering drops, which this year could practically be full-time employment. As someone said recently, “There are a gazillion apples on the ground.”

Old island apple trees, along with their counterparts on the mainland, have outdone themselves this year. The island deer, along with the humans, could merely lie on the ground with mouths open and enough apples would fall into them to keep us all well fed. Well, perhaps that’s an exaggeration. But I keep spackle buckets in the back of the car that I use to gather up likely looking specimens.

Over the years, I have become fond of certain trees because of the apple’s good cooking or keeping qualities, and most years, I gather enough to last through March or April. This year, I have the luxury of storing away only the most perfect ones and the rest get tossed into a box or tub for cider.

We stored those apples we picked up when I was a kid in a cold crawl-space under part of the house accessed by cupboard doors Dad installed from the cellar proper which, heated by the big coal furnace, was too warm for keeping apples fresh.

From time to time, Mom sent me down cellar to bring up apples for crisp or sauce. Opening the doors released the most wonderful surge of apple aroma. With lots of apples in storage right now, when I go down my cellar stairs, I can smell that same aroma from my childhood. Beguiling.

While I still gather drops, I have not followed in my mother’s footsteps with apple cookery. My mom usually made smooth apple sauce by running the cooked, unpeeled apples through her Foley food mill. I like it chunky, so I cook apples until they are barely soft then add a modicum of sugar, which encourages them to stay a little firm.

I used to can apple sauce but prefer now to make a little as needed from apples that are about to go kerflooey in storage. I pluck them out of their bucket, pare out the mucky spots and cook them up. I mix granola into applesauce for my breakfast.

Mom used to make apple crisp in a clear glass Pyrex casserole with a topping made of white sugar, butter and flour. It was certainly delicious, and I recall that there seemed never to be enough of the golden crisp part. Today, I favor a big wad of rolled oats added to butter, flour and brown sugar, and I have solved the not-enough-crisp problem by baking my crisp in a 9-by-13 inch baking pan so there is a generous layer of crunch over a couple inches of tender apple.

Now, too, there is cider we made with our across-the-road neighbors, Nancy and Terry. The press we borrowed in previous years had an aggravating hand-grinder which required patience and energy to crank: it hung up early and often on apples, had to be backed up and yanked forward again to get unstuck. Hours later, with sore arms and shoulders, we enjoyed lots of cider but this year Terry tinkered with the grinder and figured out how to power it with a big old electric drill. Wheee. We powered through a lot of apples in a couple hours. That is cider worth drinking. I always let some get a bit fizzy and when I conquer fermentation, I’ll make hard cider.

Eating and drinking our apple abundance this year will extend well into winter. How amazing to sit inside on a wintry day, perhaps during a snow storm, and consume last summer’s rain embodied in an apple. Surely somewhere deep in my bones are minerals from drops I gathered as a child, to which by spring I will have added island soil, air and water from drops I gather now.

Sandy Oliver is a food historian who cooks, writes and lives on Islesboro. 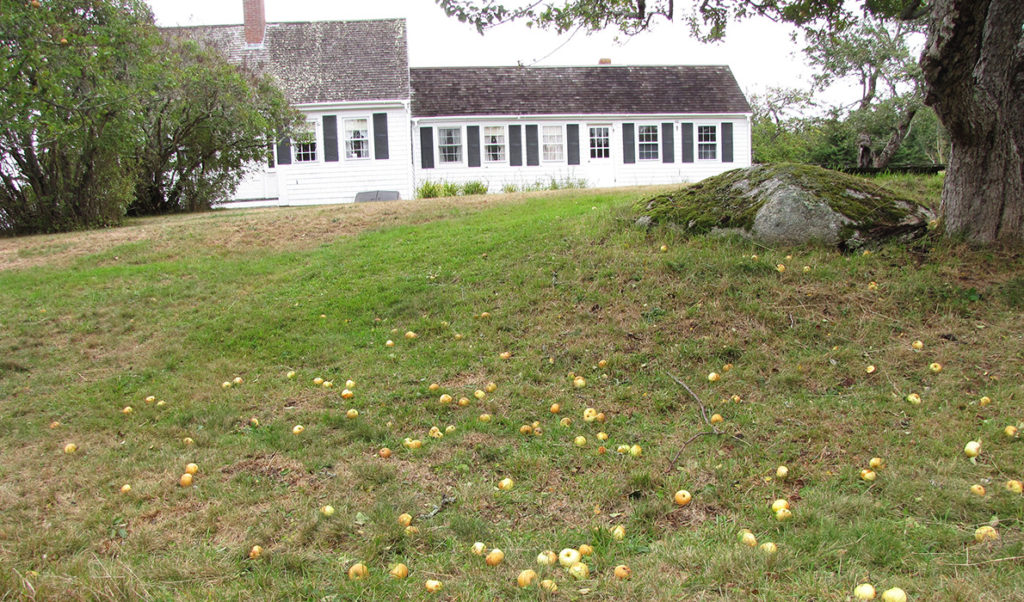