Take a funny Patrick Stewart video, a fundraiser for a new robotic application and the words “whale snot” and mix them together and you should have a perfect viral Kickstarter campaign. That’s what the Ocean Alliance thought when it released a small video of the famous actor being harassed by scientists as the organization attempted to raise $225,000 for three expeditions to use aerial drones, called “SnotBots,” to study endangered whales.

It just goes to show that you never can tell about the Internet. While the campaign did indeed go viral, it didn’t quite make it to the fundraising goal, according to Iain Kerr, CEO of the Ocean Alliance in Gloucester, Mass. The organization had to tap its base of donors for the last bit of funds of the fundraising goal.

“We did not make it the normal Kickstarter route,” Kerr said. “I wish I knew why.”

Kerr will have to ponder this at another time, as he was preparing for the first of the three expeditions with the drones, this one to Argentina to study Right whales. He’s eager to see how the SnotBots perform, as he and other scientists believe drones will greatly increase the amount and quality of data gathered on such expeditions, all at reduced costs.

Kerr describes how scientists traditionally have to spot whales, approach the whales and then try and get a biological sample, all while hoping not to stress the animals being studied. It’s a process that often results in a sample a day, at a cost of $2,000 for each day on the water. With the drones, researchers only have to remotely spot the whales and hover about 12 feet over them and then collect the biological material from the whales’ spout-hole exhalations.

“Even if I only get 10 samples in a day, that’s ten times what I was doing previously,” Kerr said.

Scientific understanding of ocean creatures and ecosystems lags behind that of animals and land ecosystems. That’s at least partly due to the difficulty of studying aquatic mammals, said Wayne Perryman, a marine mammal researcher at NOAA’S Southwest Fisheries Science Center. Large marine mammals like whales can tell a lot about an ecosystem, but getting good samples is difficult, Perryman said.

“They don’t get out of the water, are often too big to handle, and are frequently under some form of protection due to a history of exploitation,” he said in an email interview.

Perryman’s team has collected 35 breath samples using drones. He can see the promise of drones, but also the danger of their popularity. As this new technology becomes more accessible, there’s increased risk of individuals harassing endangered wildlife with them.

“Often, they don’t know the damage they can cause by chasing seals and sea lions off beaches or spooking animals at sea,” Perryman said.

Federal regulators are still trying to create rules to govern drone use, according to Jamison Smith, who leads NOAA’s Large Whale Disentanglement program. Not only is the technology new, but there is such a variety of drones on the market, many with differing acoustic signatures.

“The drone technology is so new that we’re not quite sure of the harassment potential,” Smith said.

There are specific regulations governing the distance one must be from endangered marine mammals, and a drone is currently considered just as bad as a ship in the eyes of the law. Recently, two drone operators were prosecuted and fined for flying drones too close to orcas in Washington state.

Researchers must apply for permits from both NOAA and the Federal Aviation Administration. The process can take between six months to over a year, and so far there have only been 15 drone permits given by NOAA. Jamison expects the process will be streamlined in the near future, and that drones will become a key part of oceanic research in the future. 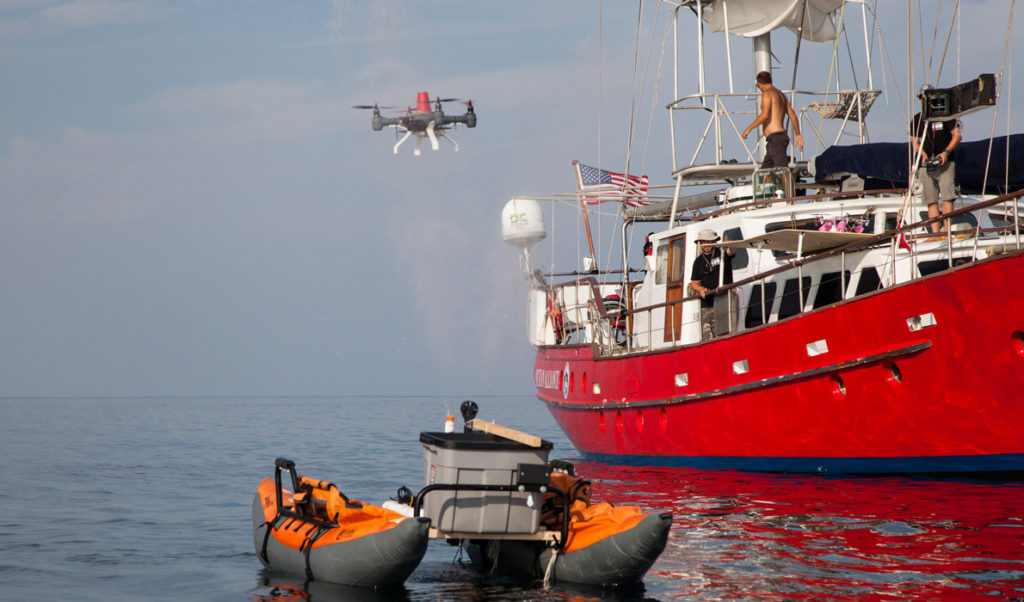 A drone hovers near a simulation of a whale exhaling.