The draft of a first-ever plan for the ocean was released May 25, launching a new way of considering a host of marine uses for the region from Connecticut to the Canadian border.

Public meetings on the draft plan are scheduled in June for Portland, Rockland and Ellsworth.

The 198-page draft, created by the Northeast Regional Planning Body, presents a wealth of information on marine life, habitat and human activities in the region. It’s significant in that it will set expectations for how federal agencies will use that data in regulatory and management processes. The plan also will provide best practices for how to engage states, communities and stakeholders earlier on in decision making processes about ocean uses that might impact them.

The plan will change the relationship between federal agencies, states and communities and begin to give fishermen and coastal communities more voice in management decisions that might impact them.

The draft ocean plan is the result of a three-year process that started with a national ocean policy, which was established by presidential executive order in 2010. The policy called for the formation of nine regional planning bodies to better manage the nation’s oceans and coasts, ensuring healthy ocean systems.

New England was the first region to respond and launched its planning body late in 2012. The regional planning body is made up of representatives from New England states, the New England Fishery Management Council, nine federal agencies and six federally recognized tribes. Its charter requires the plan to fit within existing agency authorities—which means it’s not going to do “ocean zoning” or otherwise transfer authority away from existing regulatory agencies.

The premise of the plan is that government agencies need to better work together to make decisions based on better data.

For three years, the planning body held public meetings and events to educate the public about ocean planning and to get stakeholder input. A 60-day public comment period is underway, which will be followed by a revision period by the regional planning body; the plan will then be submitted to the National Ocean Council for final approval this fall. Public meetings about the plan in Maine include:

The Northeast Ocean Data Portal includes new information likely to be interesting to coastal Maine communities. New regional scale data sets show the distribution of 150 different species of marine life; maps of some federally managed fisheries, including groundfish, herring, and scallops; and displays the Automatic Identification System that shows where there is large vessel activity – tug and barge traffic, coastal tankers, cruise ships, and cargo ships. These data sets are interesting to look at if you are curious about what is currently happening in the waters off of Maine.

Agencies have committed to use the data in regulatory and management processes but the draft plan indicates the intent is to use the data to inform and guide decisions, not make them. For example, BOEM (Bureau of Ocean Energy Management) has committed to amending its guidance documents to direct potential lessees to look at the data portal for fisheries related information.
The draft plan outlines general best practices for intergovernmental coordination.

These best practices are primarily targeted at larger projects that require environmental impact statements or an individual permit from the US Army Corps of Engineers. Among other things, they suggest that federal agencies should work together and with states, and that the data portal be used to support pre-application reviews and to help identify potential impacts. The best practices also aim to improve coordination with stakeholders, such as identifying and including them early on in the process.

Another best practice applies to projects that do not have significant state or industry impacts but could, by virtue of location and other factors, impact a specific community. The draft plans calls for project proponents to “identify and seek to engage coastal communities that have a particular relationship with a specific location and incorporate relevant data and information in project materials.”

It is important to note that this is a draft and not the final plan. Some key issues are missing; for example, there is little information about the lobster or tuna fisheries. In other places, the mechanisms for identifying potentially impacted stakeholders are unclear. That said, there is now a framework to start having these conversations with a commitment from federal agencies to do something better in this realm. Fundamentally, the draft plan sets the stage for shifting how the federal government relates to states, coastal communities, fishermen and other coastal users.

What these changes will actually mean for coastal communities, fishermen and other stakeholders remains to be seen. A good guess is that the plan will not result in immediate changes to how projects move forward, but as best practices are fleshed out, the plan provides an unprecedented opportunity to hold the federal government accountable when agencies misstep and to help improve their processes. 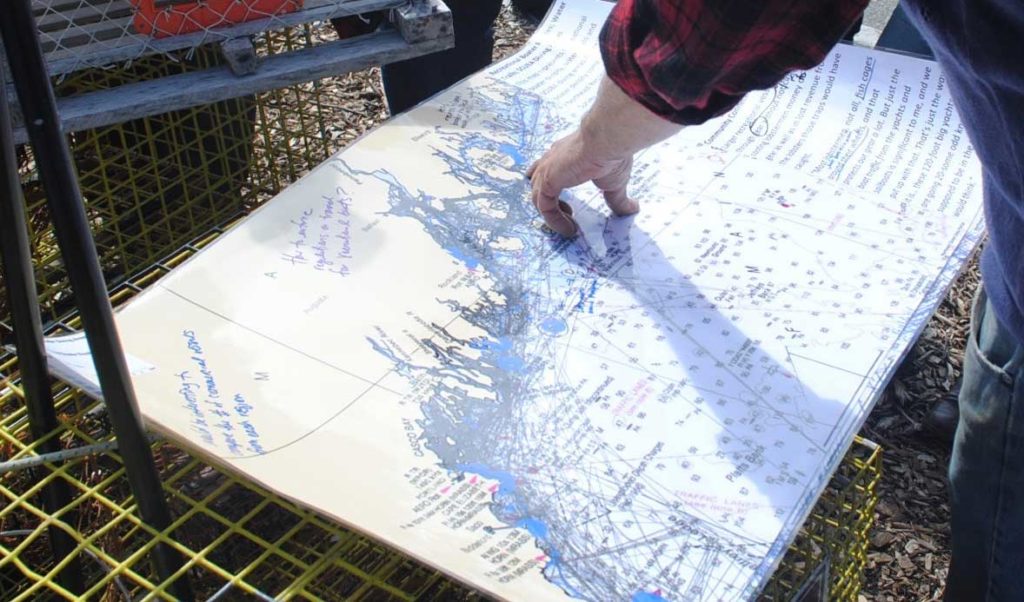 A fisherman points to a part of a map included in the draft ocean plan.

Harvesting the ‘fish that feeds all’