A $1.8 million gift from the Harold Alfond Foundation tops off the funding needed to complete a $5.8 million expansion of the Downeast Institute for Applied Marine Research and Education.

The facility is the marine science field station of the University of Maine at Machias and is located on Great Wass Island off Jonesport. Ground breaking for the new laboratory research space and residence hall will be on June 9.

“It opens up a lot of opportunities for students at both campuses,” said Dianne Tilton, executive director of the institute, referring to the University of Maine at Machias and in Orono.

“The lack of a residence facility for adults and students has been a limiting factor for us,” she said. “We are so far from any place with hotels. We do have a small guest house that can accommodate eight people, but only adults over 21.”

Phase 2 of the project includes a fully equipped marine research laboratory and expanded hatchery to provide opportunities for local fishermen and marine entrepreneurs to test new ideas and experiments for enhancing the value of their harvests.

The laboratories will provide a variety of conditions, such as flowing seawater and climate controls, as well as a mezzanine that will allow the institute to isolate algae production. The space also will include a conference room, offices, a large touch tank and other support areas.

The University of Maine invested $2 million in the project in January with funds awarded by the Maine Marine Jobs Bond. The Next Generation Foundation of Blue Hill provided a $2 million gift at the start of the fundraising. The Harold Alfond Foundation gift was announced March 1 at the Maine Fishermen’s Forum in Rockland in March.

“The goal is to create the easternmost marine research laboratory and education center in the U.S.,” Tilton said.

The Downeast Institute produces commercially important shellfish stock, restoring and creating economic opportunities for fishermen, aquaculturists, and other entrepreneurs in Downeast and coastal Maine. The institute was created in 1987 when clammers and town officials in Washington County became concerned about declines in soft-shell clam harvests. They teamed up with Dr. Brian Beal, a professor of marine ecology at the University of Maine at Machias, and created the Beals Island Regional Shellfish Hatchery.

Wild clams were spawned, clam larvae and juveniles were reared on diets of cultured algae, and seed clams were produced for planting on the depleted municipal flats.

In 2003, the Downeast Institute moved to Black Duck Cove on Great Wass Island into a 9,600-square-foot building that had been used primarily for temporary storage of lobsters. In 2010, it added a 1,000-square-foot structure for classroom teaching, laboratory research projects, and other non-traditional classroom uses.

Today, the institute is engaged in two large scale research projects. One is funded through the National Science Foundation and the University of Maine System through the Maine Economic Improvement Fund–Small Campus Initiative. The project combines translational shellfish research in the laboratory with field projects that have resulted in partnering with two seafood companies: A.C. Inc. in Beals and Cooke Aquaculture in Machiasport.

Together they are examining methods to produce commercial quantities of Arctic surfclams and blue mussels.

The other project is funded through the University of Maine System and is being conducted in Freeport. The research involves looking at new ways to manage shellfish resources threatened by the recent explosion of the invasive green crab, Carcinus maenas. 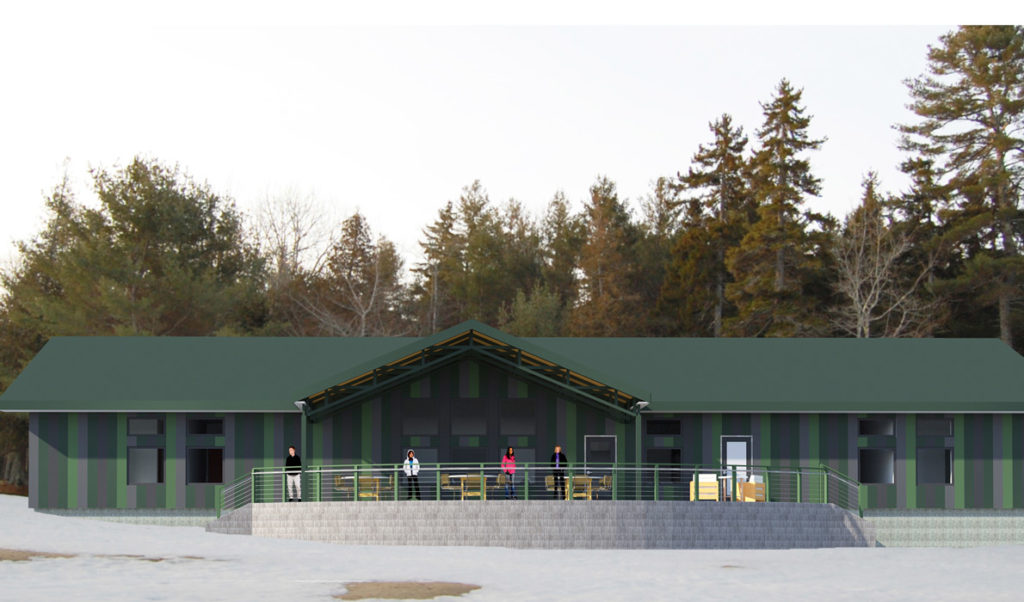 An artist's rendering of the new facility planned for Great Wass Island.