I was having a cup of tea with my neighbor, Mary Schuch, last week as she recalled what it was like, three years ago, to move into my nephew Malcolm’s house. The house was occupied by several summer employees. She noticed that some of the dishes in the kitchen had masking tape on the bottom with a name written there.

“Did you return them?” I asked.

“Well, there were so many people living in the house,” she said, “and I didn’t know many island people yet, so I didn’t know who had left what.” But she did wonder, “Why the tape and the names?”

When you live in the Cranberry Isles it behooves you to put your name on things that leave your home. Canvas grocery bags, for example. Islanders have been using such bags for years to tote their groceries and other purchases back home. (It may be one of the few times we’ve been ahead of a mainland trend!)

Our passenger ferries stop at both Islesford and Great Cranberry and we know to be fairly rigid with package placement. Items to disembark at the big island ride on the starboard side of the boat, Islesford items ride to port. In case you get this mixed up, Ted the deckhand is usually nearby to help set you straight. The middle of the boat is a sort of “no man’s land” for bundles.

You might watch the unloading at the first stop if you live at the second stop, but there is always an opportunity for a well-meaning person to unload one of your bags on the wrong island. If your name is on the grocery bag, it’s only a matter of a phone call or a post on Facebook to track it down.

Most islanders will go out of their way to help get a package back to its owner on the other island, if they know to whom it belongs. A bag without a name will usually make its way back to the shed on the dock until the owner comes to track it down. Though by that time, either the ice cream has melted or the lettuce has frozen. So we write our names, with Magic Marker, and likely our phone numbers on the bags too.

Dishes also benefit from being labeled as they gallivant around the island via pot luck suppers at the Neighborhood House and Community Center, or “welcome home” cakes and casseroles. Eileen Colby Richards, postmaster at Great Cranberry and the president of the Ladies Aid, agrees that pie plates seem to rack up the most travel miles.

“Everyone is always looking for their pie plate,” she observed.

It is the same on Islesford. If you are on the clean-up crew and there is leftover pie, you just take it home. One less dish to wash when you’re ready to call it a night. Then you take it back to the building when you’re done. If I’m missing a pie plate, the Neighborhood House kitchen is the first place I’ll look for it.

I asked former Islesford Dock Restaurant owner Cynthia Lief if many of its dishes had been lost over the years. She had a few stories, but my favorite was told to her by a summer resident on Islesford. This family has a fairly large house that they rent out. Glasses and coffee cups seem to travel away from the house, especially during wedding weekend rentals. Many times, Caroline has repurchased her own wayward glasses at the Islesford Fair. Orphaned dishes usually show up on the white elephant table at one of the island summer fairs.

Eileen says that the Ladies Aid will keep unclaimed dishes stacked on the wood stove for up to a year but then off they go. She has even posted photos on Facebook telling people, “Come and get them now or you can buy them back at the fair.”

Karen Smallwood quickly learned to use cardboard cake rounds in her 24 years of making cakes for the restaurant after several of her good dishes went missing. A year later there they were on the white elephant table. I asked her if she had to buy them back: “No. They were mine, and I didn’t donate them, so I just took them home!”

Unlike lost grocery bags, lost tableware tends to stay on its island of origin. That doesn’t mean it will return home any sooner, but as Mary said, “You know it’s on the island somewhere and that it will eventually show up.”

It’s one of the things I like about living in a small island community. When a dish or a bag goes missing my first impression isn’t, “I bet someone took it,” but rather, “I wish I’d put my name on it.” 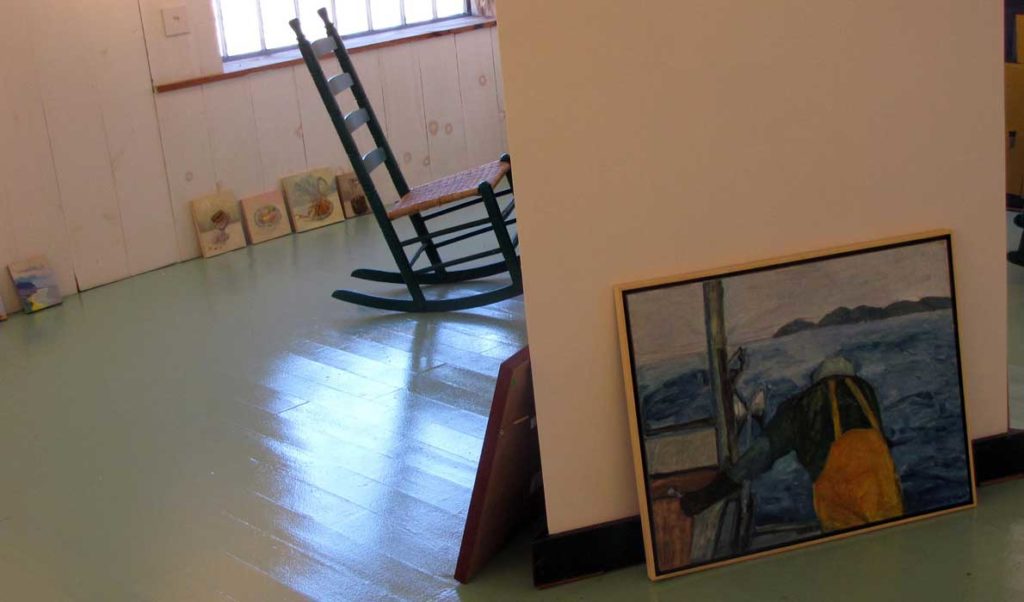