It’s not every day the government pays for nearly half of a new engine for a commercial boat, but that’s the case for owners of some vessels. Since 2009, over 100 fishing boats, schooners, ferries, whale watch boats, and even a tug boat have been repowered with grants from the state’s Maine Clean Marine Engine Program.

Last spring, Kevin Glover repowered his 1994 Holland 38, replacing the original 692 Detroit diesel with a new Cummins. For Glover, a lobsterman out of Owls Head, upgrading the old, out of date engine was important. He likes his boat, how it handles, and wanted to put in an engine that would serve him well into future.

Glover said his old engine was “getting harder to get parts for, harder to work on, it wasn’t economical, and it consumed more fuel.”

When you rely on your engine to make your living, reliability is important. “Missing two or three days at the height of the season hurts,” he said. “You have to go when the getting is good.” The new engine is going to have a lot less down time and need minimal repairs. And with the new engine, Glover’s fuel is consumption down 10 percent to 12 percent.

The program funds up to 40 percent of the purchase and installation of a new engine that meets federal Environmental Protection Agency standards. Maine’s Department of Environmental Protection developed the program using Diesel Emission Reduction Act funding from the EPA. The Clean Marine Engine Program was the first in the nation to specifically target older marine engines.

To date, $2 million has been spent to repower over 100 vessels, thereby reducing harmful exhaust emissions by 54.16 tons per year of nitrogen oxide and 3.63 tons per year of diesel particulate matter.

Nitrogen oxide contributes to the formation of ground level ozone which can irritate the respiratory system and diesel particulate emissions contribute to respiratory and cardiovascular illnesses. Diesel exhaust is also a known carcinogen and prolonged exposure has been linked to increased rates of lung cancer.

“The Clean Marine Engine Program has been a successful and popular program that benefits both air quality, fishermen, and boatyards,” said Lynne Cayting, who developed and runs the program. “DEP in partnership with Maine Marine Trades Association have promoted early replacement of diesel engines before the end of their useful life to accelerate engine turnover and reduce harmful exhaust emissions.”

Since this program is focused on air quality improvements, the requirements are designed to ensure the cost effectiveness of the emission reductions which means that some engines are not eligible. The engine must have at least three more years of useful life before it is scheduled to be repowered or replaced. An accurate cost estimate for the new engine and installation as well as an annual fuel bill also are required. Finally, working with a boatyard ensures the old engine is properly destroyed and the paperwork is in order.

“A big focus for this program is anybody who has 2-cycle or tier 0 engines. Repowering these engines really makes a big difference on the impact to the environment,” said Greg Sanborn, the service manager at Billings Diesel and Marine Services in Stonington.

Glover worked with Journey’s End Marina in Rockland and DEP to complete the paperwork. Sanborn, who has helped with almost 30 repowers, said the process is not difficult.

“The way this program has been implemented, the application is easy. It is not a difficult form. It’s a great program and the funding has worked well.”

Depending on the size, an engine for a lobster boat costs between $40,000 and $80,000. The cost of installation varies but typically is an additional $25,000 to $40,000. It is common for owners to have other work done while the boat is being repowered, such as replacing the stuffing box, shaft, or hydraulic systems.

In 2018, the program will see more available funding because of how Maine is spending its share of the Volkswagen Diesel Emissions Settlement. More information on the Clean Marine Engine Program can be found on Maine DEP’s website and information about the Volkswagen Diesel Emissions Settlement can be found on Maine DOT’s website.

Nick Battista is policy director for the Island Institute, publisher of The Working Waterfront. 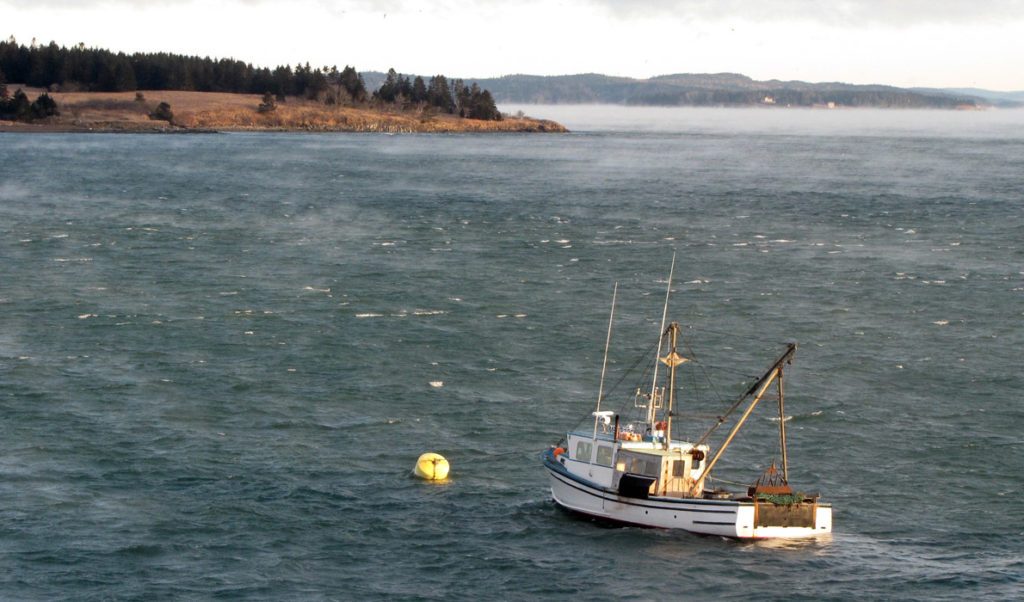 A scallop dragger at its mooring on a cold