No matter where you live, it is easy to lose sight of the highlights of your surroundings. You do your job, raise children, make phone calls, pay bills and run errands.

In the Cranberry Isles, the boat ride to and from our cars on the mainland forces us to notice our environment, but most of us don’t ride the boat every day. One of the things I regret having lost, from my years of coming to Islesford as a summer person, is the delight in returning to a special place after waiting for months and months to be there. To exchange this annual renewal of awe for the fulfillment of a childhood dream is not such a bad trade-off.

I almost never complain about living here, but I do admit to losing sight of the wonderment from time to time. There is no better antidote to this clouded vision than to have someone visit me on “my little island” for the first time.

On the day of the fall equinox, two sisters from the Netherlands came to spend a day and night with us on Little Cranberry Island. I had never met Jolanda van Liepsig, but I met her sister, Helga, at a Precious Metal Clay conference at Purdue University in the summer of 2008. We’ve kept track of each other through our blogs and on Facebook.

Last year, after I wrote a blog post about a visit from another jeweler I met online, Helga commented that she would love to visit in 2016 when she and her sister came to see Acadia National Park. “Of course! September would be the perfect time of year for a visit,” I replied.

I arranged to meet Helga and Jolanda in Northeast Harbor so I could show them where to park. They both speak English very well. I proudly told them the one Dutch word I knew, stofzuiger, which means vacuum cleaner. We laughed at the randomness of that knowledge.

Upon arriving at our house, the sisters stood still and cocked their heads. They were listening to the quiet, saying they had rarely experienced such a lack of noise. Whenever someone asks me what it’s like living on the island, “quiet” is usually the first word of my description. It’s one of my favorite facets of island living, but I can block it out at times with the day-to-day noise in my head. I love the reminder when a guest remarks on the silence.

Heavy fog that morning caused Bruce to change his mind about going out to haul his lobster traps. By noon the sun was out and Bruce offered to take the three of us out to catch our dinner. Jolanda immediately asked for gloves so she could try stuffing bait bags. Helga had her camera out and I soaked in the sights and smells of a job I once did long ago with the man who was running the boat.

An hour later we were coming in and the temperature was quite warm. “Did you bring your bathing suits?” I asked. Helga said no, but Jolanda was up for a September dip. She came with a suit. When we got to the beach there were four other friends already there. In case you were wondering, the water was around 58 edgrees, about as warm as it gets before the big cool down. We stayed in for quite a while.

Our dinner was the first time either of the sisters had eaten lobster and they each enjoyed it enough to eat two of them. It wasn’t until the next morning that Helga and I took the time to sit in my studio and talk about jewelry, specifically metal clay. We each told our stories of how we came from a more traditional metalsmithing background to be using this incredible form of silver; who our teachers and mentors had been.

I realized how lucky I was to be able to order from a jewelry supply company in New Mexico, at any time, and pay reasonable shipping costs to have the order arrive in three days. Helga buys from the same company, but usually has a package sent once a year, at a much higher price.

We had way too short a time together—just 24 hours—something that could be remedied with a longer visit to the Netherlands someday. I realized it had been a long time since I had spoken my “work language” with someone who knew the same dialect. Their appreciation of the island reminded me to listen again to the quiet.

Our afternoon and evening together made me grateful for a strong marriage to a guy with a fascinating job who provides me with lobster whenever I want.

As an introvert I feel well suited to my life on the island—designing and making jewelry and writing. I really don’t mind spending time alone most of the time. But when the air gets a little stale, or the wonderment is gone I just need to remember how refreshing it is to have someone visit who has never been to the island, and to think about how quietly cool my life is when I just show up and pay attention to it. 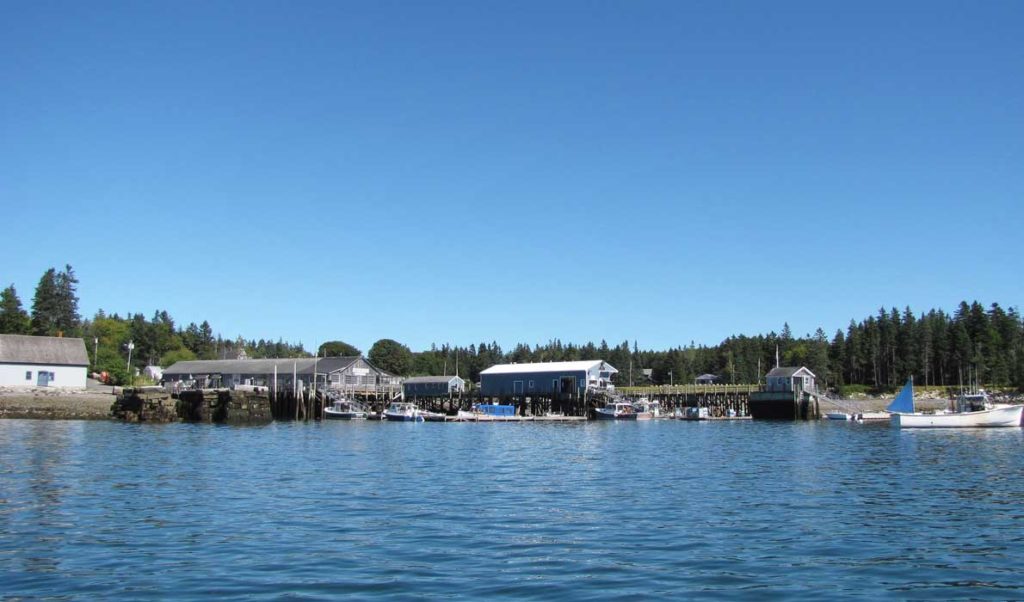