Time and again since 1958, fierce storms have peeled back an unusual amount of beach sand in York, temporarily revealing remnants of a 50-foot wooden hull thought to date back to an 18th century vessel. Maritime archeologist Stefan Claesson is hoping to conduct an archeological dig of the hull to firmly establish its identity, provenance, and what cargo it was carrying on the ill-fated day it was swept ashore.

Claesson, who first became aware of the shipwreck in 2007, strongly suspects—and told York selectmen and others in a presentation in March—that there is a very good chance the hull was the single-masted Defiance, a sloop built in Massachusetts in 1754 and used for transporting cargo.

If it is the Defiance, the pinky-style sloop set sail from Salem, Mass., in 1769 with a shipment of flour, pork, and English products and was bound for Portland. A storm overcame the vessel, although the crew survived.

For now, the Maine Historic Preservation Commission has determined the hull is worthy of nomination to the National Register of Historic Places. But Claesson said he would prefer to have more documentation before an application is submitted.

He has already done quite a bit of leg work using historical records and by taking wood samples from the hull. He is 85 percent certain the sloop is the Defiance and one of few examples of a pre-Revolutionary War ship built in New England. These ships were the principal means of trade and commerce in the region.

During the latest reveal in March 2018, Claesson took wood samples from the hull plank and ship frame and sent them to the Cornell University Tree Ring Laboratory in Ithaca, N.Y. The laboratory said there were three different species of trees and they were cut in about 1753. Claesson said he would prefer that the hull be excavated, examined, and left in place for future residents and visitors to enjoy.

What is remaining is about 10 to 15 percent of the hull, just to the bottom of the bilge turn, he said.

“We won’t really know if it’s the Defiance until we look at more of the hull and the shape of the hull,” he said. “Right now, we think it’s a sloop, but it could be a schooner with two or more mastheads.”

The excavation would entail work by a skilled crew of 10-20 who would be screening the sand for artifacts, managing documentation, and collecting samples to be sent to laboratories for analysis. The process could be open to the public.

“I think it would be a real treat for the public to come down and see what we are doing,” he said. He and the crew would get in between the framing to find artifacts, personal effects, or organic material.

“We could take a good look at the hull, take the lines off of it, and reconstruct it while leaving the whole structure in place,” Claesson said. “We would have a tent top to protect it from the sun. It would take about two weeks to expose it and collect material. We have all kinds of technology to do the documentation very quickly.”

“It seems like every new generation rediscovers the shipwreck,” he said. “I like the idea of the public being able to interact with it. I also want to make sure we don’t lose any more information about it.” 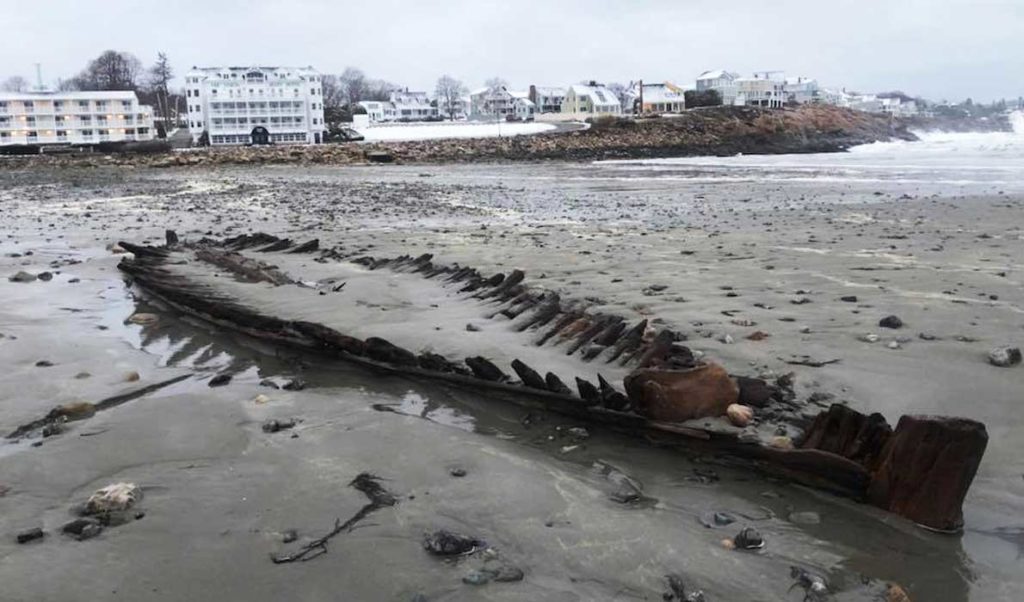 What may be the remains of the Defiance at Short Sands Beach in York.