Growing up on Deer Isle, she moved to the bigger world while attending Yale University in New Haven, Conn., then moved on to New York City, where she had vague thoughts of finding a job in philanthropy.

Instead, she landed a job—by accident—as an editor at Scholastic, Inc., the publisher of children’s books. Fifteen years and two publishing houses later, she found herself constantly delighted by her career and its focus on children’s and young adult books.

“I loved being an editor. I thought I would do that forever,” Rissi, 38, said during a recent summer’s sojourn to the family home on Deer Isle.

But a few years ago, she had a devastating romantic breakup.

So she thought she’d try writing her own children’s book. She’d had a funny title floating around in her head for a while—Anna, Banana, and the Friendship Split. The “friendship split” part seemed appropriate to her situation. She did a “brain dump” of ideas to figure out who Anna and Banana were. It turned out that third-grader Anna had two favorite things—her best friend Sadie and her dog Banana. Anna and Sadie have a terrible fight, and it’s up to Anna and Banana to fix things.

Numerous revisions later, she received an offer from Simon & Schuster, which wanted her to write an “Anna, Banana” chapter-book series. The first came out in 2015, followed by three more—all written while she was also editing full-time. Working on little sleep, and getting sick, Rissi took what she thought would be a short sabbatical. Instead, she’s got a whole new career, with six books published to date and an additional seven under contract. The books cover the spectrum from the “Anna, Banana” series, to her first picture book, The Teacher’s Pet, illustrated by Zachariah OHora and published by Disney-Hyperion, to her forthcoming YA novel, Always Forever Maybe, to be published by HarperCollins in 2018.

“I like to have a lot going at once,” she said. “I get good energy from that. As a writer, there are times when you’re miserable writing something and other moments when it’s exciting. So if I have a few things going at once, something is always at that exciting stage. That works for me.”

Currently living in Princeton, N.J., but frequently visiting Deer Isle, she said that growing up in the small community lent her great perspective, both when she was younger and navigated her way into the larger world, and today, as she maintains connections within different types of communities.

Because her parents were newcomers to Deer Isle back in the day, her older brother was one of the first kids in the school system who didn’t have parents and grandparents who had also gone to school there. By the time Rissi reached school age, that had changed, but still, she said, “It felt to me that everyone else got to be cousins and I didn’t.”

Rissi, who is naturally sunny and gregarious, recalled her delight when she transitioned to Yale. The student population of 2,000 seemed huge: That’s Deer Isle’s entire year-round population, and there were only 24 students in her high school graduating class. But her older brother was at Yale, and the university has a residential system that puts students in smaller groups.

“That seemed less intimidating,” she said. “For me, it was the world opening up.”

She felt the same way about New York (although the timing was terrible; the move was initially scheduled for Sept. 12, 2001).

Growing up in a place like Deer Isle gives children a unique perspective, she said.

“This is an incredibly special place,” she said. “I grew up with so many honorary grandparents. I had a lot of people who might have been my siblings or my cousins or my aunts or my uncles—people looking out for you in loving ways. They see you and want to know how you’re doing. That’s something you carry with you. Coming from a place with a strong sense of community, you know how to go elsewhere in the world and also how to be part of a community. You know how to be someone who cares about your neighbor. You know how to be curious about the world, because you grew up in a place where nature is constantly doing interesting things and where stories and information come from unexpected places.”

Leaving a small-town home can be scary.

“(But) I think you’re well prepared to do broader things, because you’ve developed a sense of yourself in a place,” she said.

The internet has made it easier both to navigate transitions and maintain connections back home, she said.

“A mom of a kid who’s in school now reached out to me on Facebook and said, ‘Can you talk to my kid about editing?’ The Internet changes everything.” 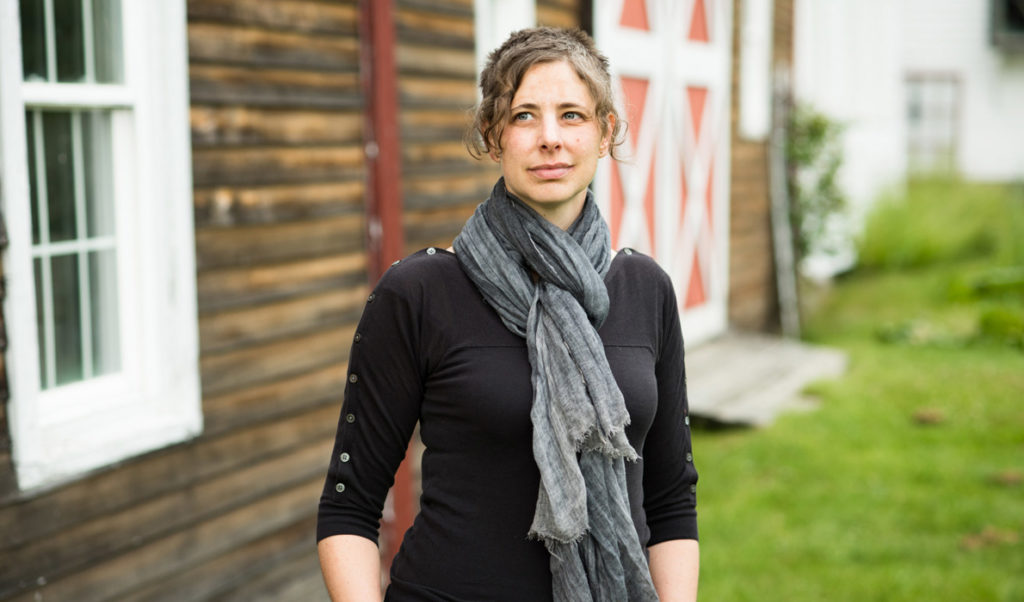