The military has a lot of stuff to ship overseas for its missions: food, clothes, toiletries, cleaning supplies, paper and pencils, and even books and movies. But its first mission, of course, is remaining prepared to fight a war, should that unfortunate thing occur.

The T-AKE class of U.S. Navy ship is designed first to carry ammunition of all kinds.

In fact, the Washington Chambers, which I am sailing with this summer, probably carries more explosive on board than the entire battle group she services. We carry everything from 9-milimeter bullets to harpoon missiles and 50-pound charges.

So much dangerous cargo requires extreme care in both its storage and cataloguing.

Dennis, the cargo 2nd mate, checks each individual pallet for a proper tag and label. What is it? Where is it going? Who is it for? Is it easily detonated? How should it be stored? Everything has its own serial number and lot number and about a dozen other numbers that all mean something.

“The government likes putting extra numbers in just to make it confusing,” Dennis says with a wry grin and a roll of his eyes.

Of the four ammunition holds on board, he has a giant stack of paper for just one of them. Today, the cadets are tagging along to help re-check an entire hold of munitions for the Navy SEALs. It’s a pile of bullets and bombs that aren’t going anywhere—it will all just sit and wait until it’s needed. None of it has been properly labeled, however, and Dennis has his work cut out for him.

The hold itself is enveloped in water-cooled bulkheads to keep the interior temperature low. Dressed in long sleeves and heavy work clothes, the crew brings electric fork-trucks down to lift the pallets and move them around.

On the deck, several workers have to lift and move tall stanchions that are holding the cargo in place. Wood blocks and wedges keep the fit snug, so the first half hour of work is filled with the echoing bangs of hammers as we knock all the dunnage loose.

Once all of the pallets are spread out on the deck, Dennis squints to read the stamped numbers on the sides of each one. Then he matches them up to a number on his checklist and determines what kind of label to put on the pallet.

“Quebec,” he says, pointing to boxes of .50 caliber rounds. We grab green stickers with “Quebec” stamped on them and smack them onto the side of the crate. Quebec is the code for the destination—marines, navy ship, SEAL unit, or even another branch such as the army. Then Dennis looks at a box of crater explosives and marks it off.

“Cat,” he says, and a red sticker goes on the side. This indicates that the contents of the box can be detonated very easily. When handling it, the cargo crew has to be especially careful not to bring it near a certain kind of detonator. For instance, a box of plastic explosives can never go near a box of blasting caps, since they are inserted into the clay to make it go “boom.”

Working on these ships is inherently hazardous, but as with all things, strict regulations can keep disaster far away. If the crew dots the i’s and cross the t’s on all checklists, everything will remain still and quiet down in the holds.

When all the labeling is complete, the pallets of explosive items all are stacked again and packed tightly between the protective stanchions, waiting quietly for the day they need to be used. With any luck, that day will remain in the future and not trespass on the present.

Benjamin Stevens of Islesford (Little Cranberry Island) is a student at Maine Maritime Academy who is working this summer on the U.S. Navy ship Washington Chambers. 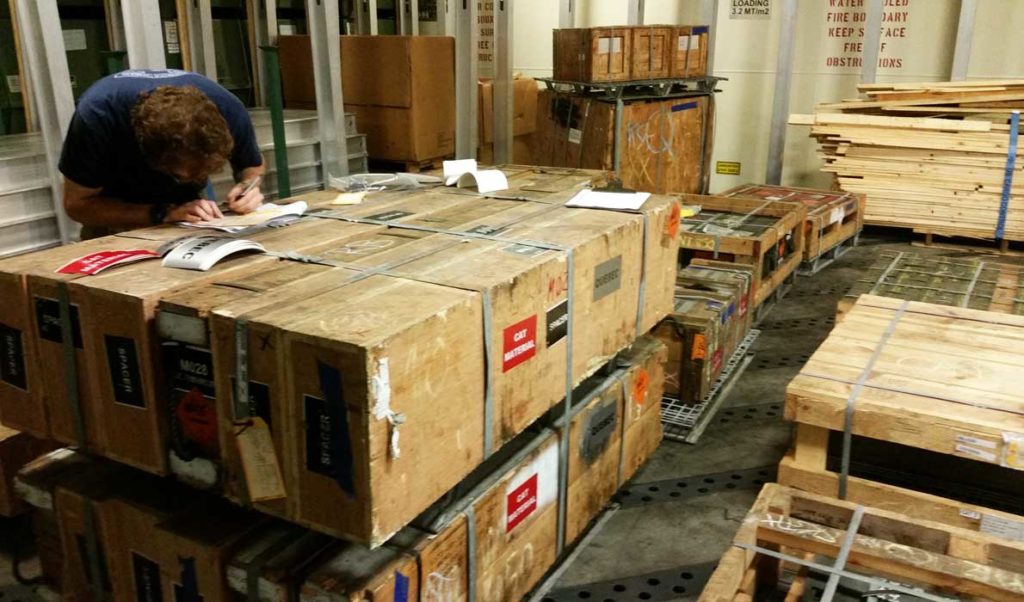 Cargo Mate Dennis checks every piece of ammunition in the hold by hand.