Every day, seniors call the state’s area agencies on aging in crisis. Some catastrophic situation has happened and they need to move out of their homes immediately. They need a new place to live that they can afford and suits their social and physical needs.

That’s when they learn there’s a three- to five-year wait list and when something does become available, they will likely have to leave the community they call home.

Damariscotta’s Inn Along the Way, a nonprofit community organization, hopes to alleviate such situations, and one day, eliminate them. The first step in achieving that goal is the Chapman Farm project—a senior housing model that organization members are calling a “pocket neighborhood.”

Located on Damariscotta’s Main Street not far from downtown and Route 1, the 31-acre Chapman Farm is the former home of the Chapman family, descendants of some of the first settlers in Damariscotta. It housed nine generations of Chapmans before the $500,000 sale to the Inn Along the Way in December of last year.

In its new incarnation, the farm will be home, initially, to 12 small rental homes ranging from studios to two-bedroom units, all fully accessible and adaptable so as to meet the changing physical needs of residents as they age. Rental rates have not been determined yet, said Sherry Flint, the nonprofit’s founder and president of its board of directors, but will be on a sliding scale.

The aim of this senior housing model, inspired by a variety of community living models across the United States, is to create a vibrant, interdependent community. Instead of isolating seniors in an insular campus, the Chapman Farm project will invite the larger community in.

The nonprofit hopes to become self-sustaining by renovating the family home and barn into a small inn and cafe, a farm-stand and a restaurant, all open to the public. The public already comes to the farm to walk trails on the land, said Flint. More groomed trails are planned as part of the landscape design.

Some of the land will be available to organic farmers to rent. And four respite cottages, which the organization hopes to offer free of charge to the community, will be available on a short-term basis for caregivers seeking some downtime from the stress of caring for a sick loved one or accompanying those loved ones moving through end of life.

The Inn Along the Way’s board members plan on building the project—estimated to cost in total around $10 million—in stages, as they have the funding, but they’re feeling the pressure to get the homes built and available.

Flint said she has been contacted by many seniors in Damariscotta and from the Midcoast area who share with her how desperate they are to find appropriate, affordable housing.

“Because of people who are in need of this, we need to be consistently moving forward,” she said.

Among the people Flint has heard from is Mary Betterley, a spunky octogenarian who, with her border terrier, Raymond, was a familiar figure in Damariscotta.

When Betterley’s husband, George, decided to buy a house on the river in Damariscotta as a weekend getaway nearly 40 years ago, she wasn’t enthusiastic.

“I’d become a city animal and wasn’t too thrilled about spending weekends in Maine,” she said.

The couple lived a busy life in Boston’s Back Bay, and in Mary’s opinion, weekends were for enjoying the many entertainments the city had to offer. But it wasn’t long before Damariscotta and its people won her over and she elected to become a full-time resident, leaving her husband to continuing commuting up the coast on weekends until he retired.

She purchased a smaller home after her husband died, but after living there for more than a decade she came to the conclusion that it required too much maintenance for her to sustain. She decided to sell and began searching for a place to move to.

“I expected to live there for the rest of my life,” she said. “I desperately wanted to stay.”

Her house sold more quickly than she anticipated and she found herself scrambling to find new housing. With just a couple of weeks before the sale of her house closed and no suitable housing available in town, she admitted defeat and moved to a retirement community near family in Massachusetts.

“I miss everything Damariscotta,” she said from her new residence. “I think it’s outrageous that as a retirement community—let’s face it, [Damariscotta] is—there’s no place for us to go.”

A lack of housing for seniors—in particular, affordable housing—is a crisis in many communities across the state. According to a study of the state’s older population and housing stock released in January 2015 on behalf of the Maine Affordable Housing Coalition, there is a shortage of nearly 9,000 units of affordable housing available to older residents. The study predicts that that shortage will grow to 15,000 units by 2022 if nothing is done.

So far, not much has been done, said Jessica Mauer, co-chair of the Maine Council on Aging and executive director of the Maine Association of Area Agencies on Aging (M4A).

Recognizing the need, last November voters approved a $15 million bond to create affordable housing units for seniors, but that money is currently in limbo because Gov. Paul LePage hasn’t yet issued the bond.

Since the demand for affordable senior housing is so great, Maine needs all the solutions it can get, said Mauer. As one of those solutions, the Inn Along the Way, she said, is the kind of community initiative the state needs.

“This is the perfect example of a community that’s saying ‘we’re going to come together and find a way to keep the people who live here as part of our community.’ That’s brilliant,” she said. “We need that kind of leadership and inspiration.”

The Inn Along the Way’s Chapman Farm project isn’t going to solve the state’s affordable seniors housing crisis but Sherry Flint hopes to open similar projects across the state and even across the country.

But that’s in the future. For now, she said, the board of directors is focused on fundraising so the inn, café and one respite cottage at Chapman Farm can open by early spring next year.

To that end, they’re holding a Harvest Festival open to the public on Oct. 8 during Damariscotta’s annual Pumpkinfest and Regatta. The farm will host family fun from 2-6 p.m. Admission is by donation.

The farm is at 741 Main St. in Damariscotta. Go to http://www.innalongtheway.org for more information. 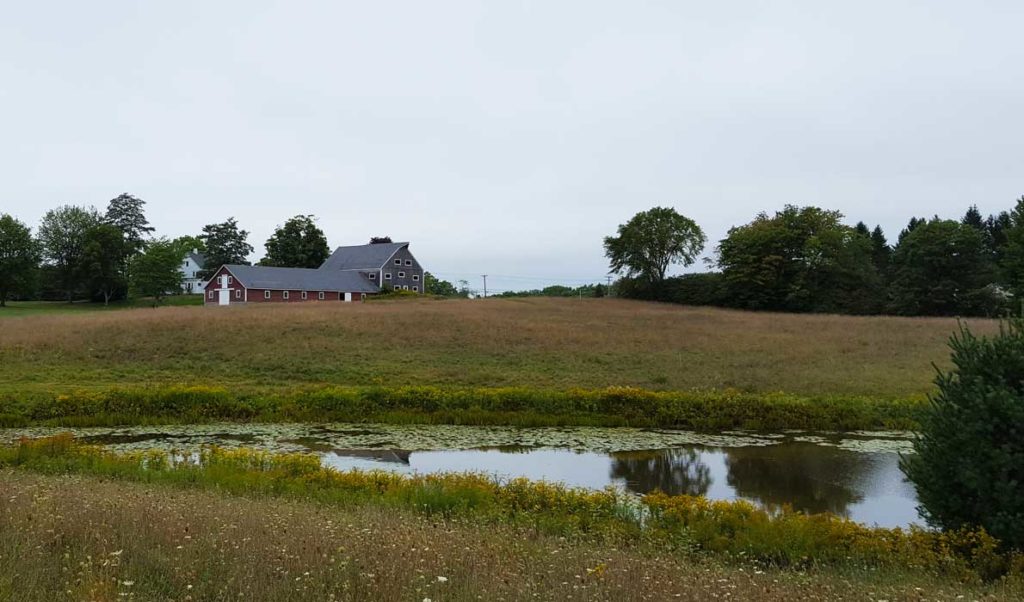 The former Chapman farm in Damariscotta will be home to the Inn Along the Way.